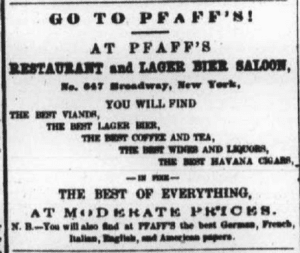 Considered a social nuisance, their rowdy and unruly behavior led to arrests. A journalistic term of abuse was turned into a banner of pride. The group’s members adopted the name Les Bousingos (“faiseurs de bousin” = brawlers).

These youngsters challenged contemporary moral and artistic values, ridiculed middle class culture, and depicted the bourgeois as a malicious fool. The upright citizen fought back by making artists pay in court for their “immoralities.” Because of their status as social outcasts, authors identified their condition with that of the nomadic Romani people of Bohemia.

The Brasserie des Martyrs was a buzzing Montparnasse café frequented by artists and drifters. One of its clients was Henri Murger who published twenty-one tales on bohemian life in the Latin Quarter. Turned into a play, these were performed at the Théatre des Variétés in November 1849. Bohemia was discovered by the popular press and the myths about hippy lifestyles started there and then. In January 1851, Murger collected his stories in the novel Scènes de la vie de Bohème.

Bohemia reached New York in March 1853 when the Knickerbocker magazine published excerpts from Murger’s novel as “The Gypsies of Art” (translated by Charles Astor Bristed).

Born in 1813 in Baden, Switzerland, Charles [Charlie] Ignatius Pfaff first arrived in New York in the early 1850s as one of a wave of German-speaking immigrants. In 1858 he opened a “chop house” at 647 Broadway (near Bleecker Street) in the style of a German “Ratskeller.”

Operating in the basement of the fashionable Coleman House hotel, customers stepped down a narrow metal stairway into a cellar that held two vaulted rooms, dimly lit, and filled with smoke. In spirit, the establishment mirrored a Parisian café as it developed into a center of cosmopolitan bohemianism. German, French, Italian, English, and American newspapers were made available for consultation at the premises. 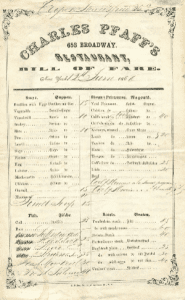 The house was known for its beer. Pfaff and his fellow German immigrants had helped revolutionize American beer making, preferring their cooled lagers to English stouts and ales. Pfaff also served a fine sampling of wine and the choice of champagnes was lauded by his clients. His menu was inspired by his (nostalgic) preference for German cuisine, offering bacon with sauerkraut, potato dumplings, and large pancakes (Pfannekucken) as a house speciality.

Taking pride in welcoming his preferred clientele of theatrical managers, actors, and foreign-born musicians (the majority of whom were of German background), Pfaff remained a Swiss-German gentleman in both manner and accent. 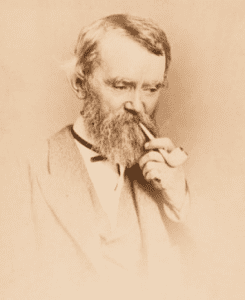 Born in Massachusetts to a family of merchants and sailors, Henry Clapp made a “pilgrimage” to Paris in 1850 in order to translate the socialist writings of early socialist thinker Charles Fourier. Once there, he abandoned his one-time support for the temperance movement and embraced the city’s café life. Social reform was overwhelmed by his passion for pleasure.

Upon returning to New York in 1850, he sought to recreate the Bohemian atmosphere he had encountered in Paris, assembling a crowd of journalists, painters, actors, and poets around him. Pfaff reserved a long table for his circle of friends where they would eat, drink, and discuss the latest events in literature and the theater. Clapp took center stage at the group’s meetings. He was labelled King of Bohemia.

The group’s unofficial mascot was the recently dead Edgar Allen Poe, whom Clapp admired for his writing, troubled lifestyle, and his public denouncement of Boston, headquarters of Thoreau and Emerson, and self-proclaimed literary center of the United States. The crowd that gathered at Pfaff’s were keen to turn New York into a literary and publishing capital.

Clapp was founder of the Saturday Press (its first issue was published on October 23rd, 1858), a weekly magazine intended to be New York’s answer to the well-established Bostonian Atlantic Monthly. The printed offering turned out to be a Pfaffian mixture of poetry, short stories, social commentary, and sexual unorthodoxy.

The Civil War took its toll on the paper. After the war Clapp tried to re-establish the Saturday Press, but his readership had dispersed or disappeared. Before the weekly folded in 1868, it published a short story by Mark Twain and eleven poems by Walt Whitman. Clapp had been an enthusiastic champion of Leaves of Grass, which contributed to the success of the vastly expanded 1860 edition and the eventual recognition of Whitman’s masterpiece. 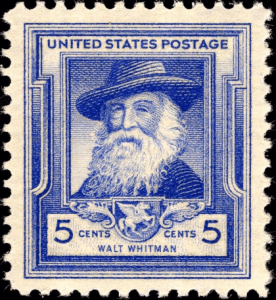 From our perspective Walt Whitman was Pfaff’s most famous regular, but for much of his adult career the poet was writing on the margins of literary society. Unemployed (he was sacked from the Brooklyn Daily Times in 1859), broke, and living with his mother in a tiny apartment in Brooklyn, the first printings of Leaves of Grass (1855 and 1856) had met with critical contempt and did not sell.

Meeting Clapp proved crucial. The latter took a liking to the poet and offered him a place at Pfaff’s long table. On occasion, Whitman would read his latest poems to the circle of writers and artists that had gathered underground. During that period he penned much of the famous third edition of Leaves of Grass. Playing the bon vivant, he found friends and lovers in New York’s counterculture. 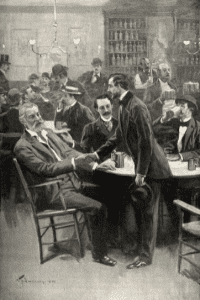 At the time, he was in a romantic relationship with Frederick [Fred] Vaughan who was nearly two decades the poet’s junior. The two lived together on Classon Avenue, Brooklyn. Pfaff’s was known as a meeting place for gay men. They were known at the establishment as the Fred Gray Association, after their principal convener. Whitman was part of this group which offered him a stage for exploring other relationships once the liaison with Vaughan had ended. He spent much time in the company of young men (his ‘darlings and gossips’).

The 1860 edition of Leaves of Grass included a section devoted to homoerotic love. To Whitman, long before he became celebrated as America’s Good Gray Poet, the Pfaff period was one of inner discovery and intense creativity.

The Civil War dampened the enthusiasm for bohemian experimentation in life and art. Most of Clapp’s coterie died young, without ever having achieved artistic success. Fitz-James O’Brien was killed in action; Clapp became an alcoholic and died in 1875 in an asylum on Blackwell’s Island; Pfaff eventually went out of business in 1887 and passed away three years later.

Roguishness may have been an intrinsic aspect of Bohemia, but there was darkness to the basement lifestyle too. For the true artist the movement, school, or circle, is but a temporary stage in the journey of creation. To weaker characters the underground was a graveyard of talent as they were unable to cut loose from the peer group.

Whitman knew when it was time to climb out of the cellar and take a breath of air. He left New York in 1862 to work in the hospitals of the Union Army in Washington during the Civil War, nursing the injured and dying. He stayed on there after the war before eventually settling in Camden, New Jersey, where he spent his final years, rarely returning to New York.

Whitman’s development as a poet was intimately associated with his underground bohemian experience at Pfaff’s. In about 1861 he wrote an (unfinished) poem entitled “The Two Vaults” in which he recalls the times spent in the basement:

Pfaff’s diverse clientele, in background and orientation, imposed upon him the concept of a composite American identity. The Leaves were intended to be a “national text,” stressing that the singularity of each being matters within the mix. The collective itself becomes richer for containing a variety of different types.