“I’ve got something for you,” my husband calls from the front door. He’s found an oddly beautiful beetle in the autumn woods. It’s around three quarters of an inch long, a dark iridescent teal, and its wings and wing-covers look comically small. Something about its body shape reminds me of a fat carpenter ant. But this is an oil beetle, a member of the blister beetle family, Meloidea.

Blister beetles are named for their chemical defense. Their hemolymph – the insect equivalent of blood – contains cantharidin, an exceptionally toxic compound that causes blisters on the skin of unwary humans. When these beetles feel threatened, they bleed reflexively, leaking poisonous hemolymph from their joints to deter potential predators.

Blister Beetles come in many colors and range from a tenth of an inch to almost three inches in length. They are recognizable by their overall body shape; their heads and thoraxes are small, making their abdomens look extra fat, and their wings don’t fully cover their abdomens. They are also squishy compared to other beetles, but giving them a squeeze is not recommended! 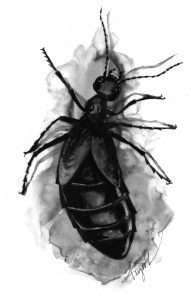 Blister beetles have a life cycle called hypermetamorphosis, which is a little different from that of other beetles because it includes an extra larval stage. Some other insects, for example certain families of wasps or flies, go through hypermetamorphosis, but most beetles undergo the kind of metamorphosis you likely learned in school; they hatch from an egg into a worm-like larva that eats and then pupates into an adult beetle.

The extra, very mobile first larval stage of blister beetles is called a “triungulin.” During the triungulin life stage, blister beetle larvae exist as parasitoids, living off and eventually consuming the bee larvae that are their most common hosts. Triungulins hatch from the thousands of eggs laid in the soil by a female blister beetle. They are tiny and hyperactive, and eventually they congregate on a tall plant into a pile that is the approximate size and shape of a female ground-nesting bee. They also emit pheromones that mimic the scent of a female bee. When a male is attracted to the pile of triungulins, the tiny larvae climb aboard the hapless bee, hitching a ride to a female and then hopping from her to her nest.

Once in the bee’s nest, they eat up her stores of pollen, her eggs, and her larvae, changing into typical worm-like beetle larvae as they do. In most species, these sedentary beetle larvae overwinter and pupate in the bee nest, emerging in late summer and fall as adult blister beetles. In the Northeast, adults will live one to two months, feeding on all kinds of plants, occasionally becoming crop or garden pests, and often gathering in groups.

The cantharidin blister beetles produce is important to their life cycle beyond protecting them from predators. Females only make cantharidin as larvae and slowly lose their store over their adult life. Males provide a cantharidin boost to females as a nuptial gift during their courtship and mating, and females use this to coat and protect their eggs.

Even some non-blister beetles have learned to use cantharidin. For example, male ant-like flower beetles (Anthicidae) will piggyback on blister beetles, licking up hemolymph to harvest cantharidin, which they present to potential mates during courtship.

Beetles aren’t the only ones who value cantharidin. Historically, a European blister beetle called Spanish fly was ground into a product by the same name that ostensibly worked as an aphrodisiac. Currently, cantharidin is collected from some species and used for wart removal. In the past decade, the journal Cell Biology and Toxicology has reported research showing cantharidin can inhibit the growth of tumors.

There are many reasons blister beetles are fascinating, from the useful cantharidin they make to their complicated life cycle. Although, given their formidable chemical defense, it’s prudent to admire them from a respectful distance, or while wearing gloves.