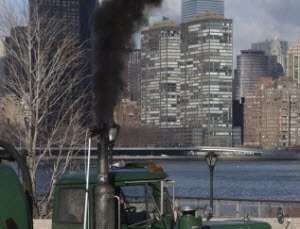 Burning fuel, like wood and gasoline, happens around the world every day. Most of the time, we burn fuels to make heat or power engines. Sometimes the burning happens by accident, as in the case of wildfires.

Most of the time, the process of burning fuels creates emissions in the form of visible smoke. Black carbon is a significant component of fine particulate matter pollution and a key ingredient in “soot.”

It’s a solid form of carbon that can be over 30 times smaller than the width of a human hair. These tiny carbon particles can travel deep inside the body through the lungs and into our blood, causing arrhythmias, changes in blood pressure, trigger asthma attacks and premature death in people with preexisting heart or lung diseases. Fine particulate matter is also a major contributor to climate change; second only to carbon dioxide (CO2).

Overall, black carbon pollution has dramatically decreased since its peak. During the late 19th and early 20th centuries in America, many homes and large factories burned bituminous coal which released large amounts of billowing black smoke containing lots of black carbon.  During this era, there was so much air pollution that modern-day researchers can study past pollution loads by looking at the soot-covered feathers of preserved birds in museum collections.

Until the mid-20th century, researchers found that soot pollution was directly tied to the amount of coal burned. After that, pollution began decreasing despite the increased use of coal.

The research suggest this is likely due to the adoption of regulations that restricted the use of soft coal and encouraged using alternative fuels, such as petroleum and natural gas. The decrease in black carbon pollution that started with those regulations continues to this day.

Even now, fine particulate matter and black carbon pollution remain a potential health risk. Limit your contribution to black carbon pollution by carpooling more often, lowering your use of diesel engines, and following NYS open burning regulations. You can save money, reduce wildfire risk, and keep our air clean and easy to breathe.