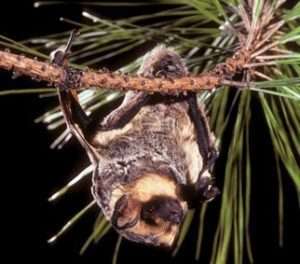 Hoary bats are very well-named, for their thick pelt of dark fur looks as though it is covered in hoar frost. It is long and silky, with the longest section forming a small ruff around its neck. Its rounded ears are covered with tannish fur and edged in black. Lighter, tan or even yellowish, fur is located at the throat, and there are whitish patches at the wrists and shoulders. This is one very handsome bat.

Like the red bat of Wednesday’s article, the hoary bat is a solitary tree-dweller, and is migratory. Also like the red bats, hoary bats dangle among the leaves when snoozing during the day. Neither of these species sleeps very high up, and if you find one in its roost, it will likely be somewhere between five and fifteen feet above the ground.

Many of our bats have rather slow and irregular flight patterns, flitting about the night sky in erratic paths as they look for and chase down insect prey. Not the hoary bat, though. With its long narrow wings, it patrols mostly open areas (often over water) in fairly linear and swift flight. This, too, is a trait it shares with the red bat. 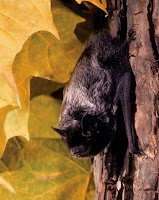 Now, it is entirely possible that to the untrained eye a silver-haired bat looks nearly the same as a hoary bat. Remember, though, that the hoary is a very large bat. The silver-haired is much smaller, weighing in at less than half an ounce, measuring upwards of four-and-a-half inches from stem to stern, and sporting a wingspan up to 12 inches across. In bat terms, it is significantly smaller than the hoary.

Silver-haired bats are overall very dark-furred. The long, lustrous hairs are only silver-tipped at the throat, head and neck. Like the red and hoary bats, it spends its summers roosting in trees, but will utilize conifers as well as hardwoods, the former typically shunned by the reds and hoaries. And while silver-haired bats will hang out in the foliage, they also make use of loose bark and even hollows when seeking a place in which to rest. The somewhat mottled coloration of this bat’s fur makes pretty good camouflage against tree bark.

Like the red bats, silver-haired bats are early risers. In fact, they have been known to begin their evening foraging forays before the sun even sets. Therefore, they get a slight head start on their other bat cousins. This in turn allows for them to take a break during the hours of darkness, when the other bats take over the hunt; silver-haireds return to their roosts of a quick nap, and then head out to forage once more before the sun rises.

Like the hoary bat, the silver-haired bat forages on moths, beetles and a variety of other nocturnal insects. However, silver-haireds not only forage over water and over woods, but they also hunt within forests, filling a niche the other two solitaries leave vacant. A quick look at the flight pattern of the silver-haired bat, slow and erratic, is a clue that it is a species that can easily maneuver within the confines of a forest. Bats built for speed (red and hoary) do much better in open areas where there is little to interfere with their rapid pursuit of food.

Hoary bats are considered to be one of the most widespread species across North America, if not necessarily common. Silver-haired bats, however, are considered not only uncommon, but possibly rare. This could be a reflection of the fact that so few have been found/captured for study. Perhaps silver-haireds and hoaries are more common than we think and are merely very good at avoiding detection.

This fact came to light one summer when I was helping NYS DEC with some bat studies. Volunteers were drafted around the state to go out at night with a powerful bat detector magnetized to the roof of their cars. The detector was hooked up to a laptop computer which ran a program that collected and analyzed all sounds picked up by the detector. The purpose of this study was to try and get some data about the presence (or lack) of bats and correlate it with white-nose syndrome, the fungal disease that is wiping out our cave bat populations.

I helped patrol four routes, three in Newcomb (the Goodnow Flow Road, the road that loops around the Huntington Wildlife Forest property, the road up to Tahawus and part of the Blue Ridge Road), and one just outside Indian Lake (a long, bumpy road that goes way back into the woods).

We had long stretches along these routes when not a single bat was heard. It was quite alarming. Our best spots were at the street lights along Route 28N, and along the waterways near Tahawus. When all the data were collected and analyzed down in Albany, they found that little brown and big brown bats were few and far between, which was expected. However, hoary bats (and eastern pipistrelles, which I will cover in another article) were much more numerous than expected. Were their numbers on the increase, or was this merely a reflection of a lack of historical data?

These are species you may never encounter, either because they are so well hidden and live mostly solitary lives, or because they are simply not all that common. If you are lucky enough to encounter any of these species, though, I hope you will appreciate the experience, for it is something you will share with only a very small and elite group of people.