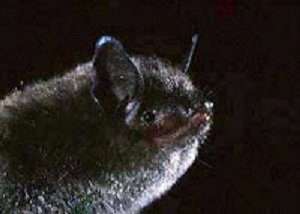 A scientist in the know, however, can detect small differences to tell these species apart, such as the length of the toe hairs (I kid you not), the length of the ears, the color of the snout, the amount of shine to the fur, or the presence of a keel on the calcar (a spur of cartilage that gives some rigidity to the trailing edge of the wing membrane near the bat’s foot).

Indiana bats are, however, rather special: they are the only bat we have in New York State that is on the Federal Endangered Species List. It was placed on this list in March 1967, so it has been there for quite some time. The species’ has declined considerably since then, a decline that has come about the way these things usually do: loss of habitat.

Myotis sodalis is a very social bat. In fact, it is so social that this very trait is reflected in its species name: sodalis, which is Latin for “companion.” These bats like to hang out together, which is especially evident in the caves where they spend the winter: upwards of 3,000 of these bats can squeeze together in an area only a meter square. Whether this is because these bats just like the company of their compatriots or because the part of the cave where they are snoozing tends to be the coldest, dampest and draftiest, and they keep from freezing completely thanks to the body warmth of their neighbors, I don’t know.

Almost the entire population of this species (which is limited to the eastern United States) overwinters in about four or five caves, mostly in Kentucky, Indiana and Missouri. However, the Adirondacks claims to be home of the fifth largest winter colony if Indiana bats.

Until fairly recently, little was known about these bats outside their winter roosts. Where did they go? What did they do? A study conducted by biologists in New York and Vermont just a few years ago discovered that the Indiana bats from our neck of the woods head for the banana belt of the Champlain Valley when the snow melts. A few male bats may remain in the caves for the summer, but most males spend the summer in solitary bliss within the hardwood forests of the valley.

The female bats, however, continue to live up to their name and remain in groups, albeit much smaller groups than those covering the cave walls in winter. Pregnant females form small maternity colonies in the woods, making use of several temporary tree roosts. They move about every few days from one roost to another, with a particular spot being a primary location. These roosts can be as small as a crawl space beneath some loose bark, or they can be a cavity within the trunk of a dead or dying tree.

The amount of sunlight reaching the roost seems to be important. Like many of our bats, ambient temperature affects the speed of maturation for baby bats: the warmer it is, the faster they grow up. And considering the drain taking care of a baby bat is on its mother, she wants it to grow up and move out as soon as possible. Sunlight is good.