The small-footed bat, as you no doubt guessed, is noted for its petite terminal appendages: it has small feet, only about six millimeters long. I’ve never seen any data on the size of other bats’ feet, but one must suppose that they are significantly larger with respect to the size of the bats in question.

Aside from having tiny tootsies, small-footed bats are also noted for their appealing coloration: their long, silky fur ranges from a glossy brown to nearly yellow; their ears are black and they sport black facial masks. They are the Zorros of the bat world.

Historically, the small-footed bat was broken into three subspecies (western, Midwestern, and eastern), but fairly recently scientists decided the western race was a separate species altogether. The eastern small-footed is not as common as its western counterpart; in fact, it is considered rather rare, with the Adirondacks being one of the few places where it has been recorded.

Because these small bats enter hibernation so late in the season (mid-November), they are deemed to be one of the hardiest of the bat species. Not only do they wait until the last possible moment to turn in for the winter, they also choose the coldest part(s) of the caves or mines in which to roost: near the entrance (or wedged into crevices, tucked under talus or even sleeping directly on the floor), where temperatures are often below freezing and the humidity is very low. These are harsh conditions. The big brown bat is known to tolerate such extremes, but it is a larger animal and thus better adapted to colder, drier microclimates. For the small-footed bat to also prefer such conditions really says something about its tolerances.

While in the winter small-footed bats have been found roosting in groups upwards of 500 in number, they tend to be a less social bat than the other cave-dwellers. In the summer, they roost alone, although pregnant females form small maternity colonies of one or two dozen individuals. The little brown bat, by comparison, can form maternity colonies of several hundred bats. 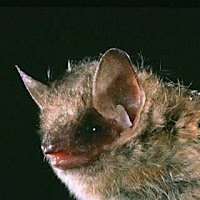 As small as the small-footed bat is (it is the smallest of the bats in the genus Myotis), it is not the smallest bat in the Adirondacks. That distinction is given to the eastern pipistrelle, which measures three to three-and-a-half inches in total length, with a wingspan of eight to ten inches. The pipistrelle is another pale-colored bat, with fur sometimes described as yellowish- or pinkish-brown. Other sources describe this bat as having tricolored fur: the base and tip of each hair is dark with a light-colored band in-between. Sometimes the pipistrelle is confused with the small-footed bat, but keep in mind that the latter has a dark mask (and small feet), and the former has “tricolored fur.”

When it is time to hibernate, the eastern pipistrelle selects caves (or sections of caves) that are relatively warm. Most hibernating bats seek temperatures that are low enough to keep their bodies in stasis without actually freezing. If the temperature isn’t cold enough, they are unable to lower their body temperatures enough to survive (warmer bats have faster metabolisms and therefore burn up stored fat more quickly). The pipistrelle, however, prefers the warmer sections of caves, and often can be found using hibernacula that other bats ignore.

Pipistrelles also tend to hibernate alone. Caves that are winter roosts for grey bats, Indiana bats, little browns or big browns usually have large patches of wall totally covered with sleeping bats. The eastern pipistrelle, however, is simply not so social. In other words, if one is doing a winter bat survey and one encounters a solitary bat, its fur sparkling with condensation, it is liable to be a pipistrelle. And, to make it even more interesting, studies have shown the same individual to return to the same spot in the cave year after year. Actually, it may have a series of spots that it shifts between over the course of the winter, but every year it can be found in one of these places.

Summer ID of the pipistrelle in flight is fairly easy. Most of our bats are pretty strong fliers. Some are fast and agile, while others take their time. Some zoom over open spaces, while others prefer the shelter of trees. The eastern pipistrelle, however, is considered to be a rather weak flier and seems to prefer to forage over water. Its erratic and rather fluttery flight is often mistaken for that of a large moth. Perhaps this accounts for the records (one of each) of its demise courtesy of the predations of a hoary bat and a leopard frog.