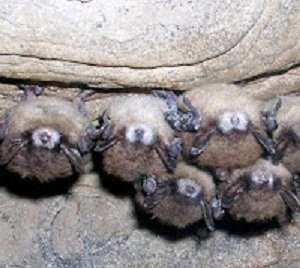 Every hibernaculum in New York was diagnosed with the disease, and in some of the caves, these bats experienced over 90% mortality. It’s a sobering fact.

Historically, when we glanced at the sky on a summer evening, it was most likely little and big brown bats that we saw flitting across our lines of sight as they chased down their insect prey. If you had access to a bat detector, these were the ones whose calls you most likely picked up. Each species’ calls come in on a different frequency and each has its own distinctive pattern. Listening to bat calls can be as much fun as listening to bird songs.

These are also the two species we were most likely to find sharing our houses and barns, for attics and barns provide some of the most ideal roosting spots for maternity colonies. Pregnant bats of the colonial species seek out large warm spaces in which to give birth and raise their young. The larger the space, the greater the temperature gradients will be, allowing the bats to move about from cooler spots to warmer ones, and vice versa, as needed. Heat is important, for baby bats mature faster when they are toasty warm.

These facts explain why those small bat houses that are commonly sold in garden shops or made by well-meaning scouts are usually not successful: they are just too small. Sure, a solitary bat or a handful of bachelor bats might make use of these small shelters, but if you were thinking that the bats from your attic would leave it to take up residence in the little bat house, you can forget it.

Studies I have read and in which I have participated indicate that bats really do prefer larger bat houses, for these structures provide not only plenty of space for the colony (maternity colonies of little brown bats can number in the thousands), but they also provide the range of temperatures that they find appealing. In this case, size does matter.

As small as a little brown bat is (3-4 inches stem to stern, with an 8-10 inch wingspan), it can flatten itself down enough to crawl through a quarter-inch space to gain access to your attic or barn. The big brown bat is larger (almost 5 inches long, with wings reaching over a foot across) requires a little more room, but probably less than you would think.

The favored food of the big brown bat is beetles, while little browns feed heavily on adult forms of many aquatic insects (stoneflies, mayflies, midges). In fact, if you are down at a pond or stream when a “hatch” occurs, you might be in for a real treat as the sun sets and the bats begin to feed.

Have you noticed that I have not mentioned mosquitoes as a major source of food for any of our bats? This is because bats do not really eat a lot of mosquitoes. There’s not much meat on a mosquito, and it is more energy efficient for bats to go after heftier insects, like beetles and moths. This doesn’t mean that bats won’t eat mosquitoes; they just aren’t as important as legend makes them out to be.

Many bats catch their food midair, snatching insects as they overtake them in flight. Some bats grab prey that is perched on leaves or other flat surfaces (gleaning). Little brown bats also use their wings and tail membranes to capture prey. A flip of the wingtip or the scoop of the tail can snag an insect as it tries to escape.

Like most of our bats, the little browns give birth to just one pup a year. Big browns, however, have fairly recently been discovered to routinely give birth to twins. As with our other bats, the young stay with the females throughout the summer, first nursing from their mothers, then going out for short flights as they learn to catch their own food. As soon as the young are capable of fending for themselves, the whole colony breaks up, heading back to the caves or mines that are the winter roosts.

Bats exhibit pretty strong roost fidelity, returning year after year to the same hibernaculum in winter and the same maternity roost in the summer. One would think that this trait might have prevented the rapid spread of WNS, but not every bat in a maternity colony returns to the same hibernaculum in winter – some may go to a graphite mine, while others head for a garnet mine. Infected bats that survived the winter carry the fungus to the maternity colony the next summer, where it spreads through contact with other bats (bats do a lot of mutual grooming). Then the newly infected bats carry the fungus back to their caves the following fall.

How quickly a species can go from common to rare. In less than five years, big and little brown bats almost vanished from the landscape. A few small colonies remain, and they are slowly recovering.

Anyone who has a colony using the attic or barn should let these animals live in peace. Evicting brown bats these days can have a catastrophic effect on the remaining population. If the bats are not posing a health hazard to you or your family, let them raise their young – you might just help a species survive.