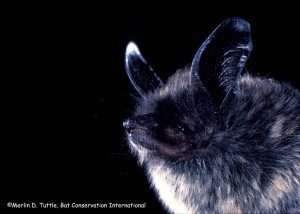 Keen’s myotis is your basic small brown bat. In D. Andrew Saunders’ Adirondack Mammals, the author describes its fur as silky, but not glossy, which apparently helps distinguish it from the little brown myotis. It isn’t much to go on. Other differences can be equally difficult to discern, especially if one does not have a bat in the hand.

Years ago I participated in a bat survey down in New Jersey. The group leader (a state biologist) stretched a mist net across the exit route of a known bat cave and we waited for the exodus. When emerging bats were entangled in the very fine mesh, we gently disengaged them and they were placed in small cloth bags for study. Each captured bat was identified to species and sexed. The goal was to determine if Indiana bats were present.

Indiana bats look a lot like little browns, and one of the key ways to tell the two apart is to gently press an ear toward the tip of the bat’s snout. If it extends beyond the snout, it is an Indiana; if not, it is a little brown.

This technique also works with Keen’s myotis, for it has relatively long and narrow ears, which, like the Indiana’s, extend beyond the snout when pressed forward. Another feature to look at is the tragus.

The tragus is a fleshy protrusion at the base of each of a bat’s ears (the open side of the ear), and it helps the bats pick up sounds. The tragus can be so distinctive between species that it is helpful with species identification. Keen’s myotis is noted for having a longer and pointier tragus than little browns.

Only a fairly small number of Keen’s myotis have been found within the Blue Line, and these have mostly been discovered during winter cave surveys, where they hibernate along with the other cave dwellers. That said, this species seems to prefer to roost alone in the winter, although it can sometimes be found as a member of a small group.

Keen’s myotis weighs in at about a quarter of an ounce and has a wingspan of approximately ten inches. It is neither large nor terribly small, so its size doesn’t help to distinguish it in the nighttime landscape. It does, however, seem to prefer foraging along ridgetops and hillsides, where it is known to take down some pretty large insects. Sometimes it even gleans insects, snatching them directly from the leaves on which they are seeking shelter. 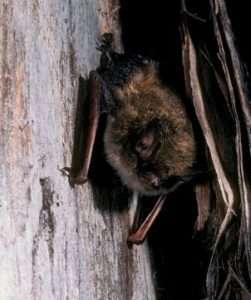 Once upon a time, not too long ago, the northern long-eared myotis was considered a subspecies of Keen’s myotis. This is why some records don’t list it as a separate species in New York State. Like birds, bats have lumpers and splitters (people who like to classify things – some group things together, while others like to split them apart). In this case, the splitters won.

The northern long-eared, as its name suggests, had rather long ears. Not as long as some western species (like the beautiful spotted bat), but longer than any of our other bats: they extend four to five millimeters beyond the end of the snout when pressed forward. Otherwise, these bats look a lot like little brown bats (oops – little brown myotises).

A small and agile bat, the northern long-eared is able to navigate cluttered air space, so the forest is its grocery store. Like the Keen’s myotis, it is able to glean insects from surfaces, a trait allows these bats to shop an aisle that the other bats miss. Small insects, like caddisflies and beetles, make up a large part of the northern long-eared’s diet, but it also has the ability to take down larger prey, like some of the heftier moths. In order to actually eat the larger food, however, northern long-eareds carry their catch to a convenient branch and settle down to eat. Most insectivorous bats eat on the wing.

The northern long-eared myotis is a truly northern species, seeming to prefer heavily forests habitats, especially boreal forest, where conditions are cool, damp and buggy. In the summer, the males live solo lives, although pregnant females tend live in maternity colonies of thirty to sixty individuals.

Individuals tuck themselves into tight spots, like beneath loose pieces of bark on the sides of trees. Hollow trees and buildings have also provided home sites for these bats, especially maternity colonies. Likewise, in the winter these bats are known to tuck themselves into some pretty tight spots in the caves where they hibernate. As a result, they are easily overlooked in surveys.