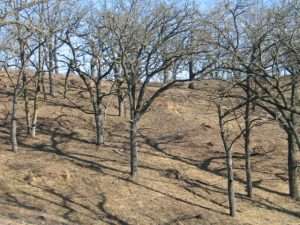 As a tall person, I’m a bit size-conscious, ducking to get through doorways, wondering when I’ll find another decent shoe in a sixteen – stuff like that. One thing which came as a surprise is that I can’t operate most mid-size SUVs unless I were to either remove my left leg, the driver’s door, or the steering wheel, all of which seem like bad options. Yet there’s plenty of leg room in a little Nissan Micra. Size does matter in many cases, but not always in the obvious way. This is especially true when buying a tree.

For years I have passed along the nugget that smaller transplants will embarrass larger ones by overtaking them within a few years, and that unless you’re older than ninety, it’s best to avoid the lure of an instant forest in your landscape. Smaller trees will continue to thrive better than the big guys planted at the same time, even after they win the altitude race. However, this was based on observation and backed up by scientific modeling; there hadn’t been bullet-proof research until recently.

In June 2021 I heard a live talk on transplanting by Dr. Nina Bassuk, Director of Cornell University’s Urban Horticulture Institute, and something of a legend among arborists in the Northeast. Dr. Bassuk’s research has produced C-U Structural Soil, a system for constructing roads that allow tree roots to pass underneath with no damage to asphalt or roots. She also pioneered the protocol for bare-root transplanting of large trees. It’s fair to say her work has made a real impact on the world of tree care in my lifetime.

For over two decades, a cooperating tree nursery in western New York State has hosted Cornell University research. Dr. Bassuk’s transplanting study there involved comparing the health outcomes of a number of oak species in three different size classes: 4-inch, 3-inch and 1.5-inch. In arborist-speak, trunk diameter is called dbh or “diameter at breast height.” It’s a deeply non-inclusive unit of measurement, as it assumes everyone’s breast is exactly 4.5 feet off the ground. In the nursery trade, where separate jargon is required by law, stem diameter is referred to as “caliper.” This seems unduly martial, as very few trees will ever become gun stocks when they grow up.

The nitty-gritty of this project is that trees were harvested with a tree spade, a cool machine which cuts off 80 to 95 percent (depending on tree caliper) of a tree’s roots and puts the remaining root ball in a burlap-lined wire basket. This is termed “ball and burlap,” the kind of B&B that doesn’t serve breakfast.

Trees were then moved over a few feet and replanted. In essence, this was the kindest and gentlest transplanting a tree could hope for: no long-distance transport, no baking in a garden-center lot, and they could hop right back into the same soil in which they grew up.

Rating the trees’ progress was no beauty pageant; appearance was not a metric of success. The parameters considered in the study included hydraulic root conductance, leaf surface area, shoot elongation, percentage of dead branches, and of course mortality. Sorry that I already spoiled the ending of the story, but the data fell into a nice straight line, with the best performance by the smallest size and the worst by the biggest. This makes sense. Tree roots extend 2.5 times the branch length and 60% of roots are outside the dripline (crown projection). So when a young tree is harvested, more of its roots are captured in the root ball as compared to an older tree with a longer root system.

After just three years, the difference between the size-classes was stark. In fact, none of the 4-inch caliper bur oaks (Quercus macrocarpa) survived, even with the pampered relocation service described above. To be fair, this species is known to be difficult to transplant. But only half of the 4-inch scarlet oaks (Q. coccinea) survived. In that same class, even the swamp white oaks (Q. bicolor), considered the easiest oak to establish, showed significant mortality. Deadwood was another issue, and many 4-inch caliper survivors of all species had sizeable dead branches.

When buying a tree, patience is a virtue that will pay off in your landscape as well as in your wallet. Tree size matters – inversely.