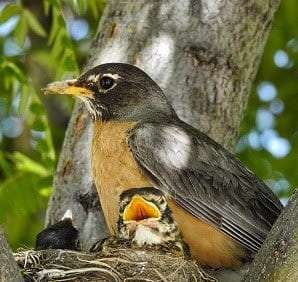 In the spring and summer of 2021, the public reported many deaths in young songbirds — common grackles, American robins, blue jays, and other species — in the mid-Atlantic states.

It was thought to be a new disease, or syndrome. Birds had swollen crusty eyes and/or an inability to hop or fly. Scientists at several regional laboratories have so far not been able to find a common disease agent or toxin for these bird deaths.

They have ruled out many likely possibilities however, including: West Nile Virus, finch conjunctivitis, Avian Influenza, SARS-CoV-2 (virus that causes COVID-19 in humans), Newcastle Disease, various fungi, bacteria, parasites and viruses, and common toxins — including many pesticides.

So far, DEC has not documented any fledgling or adult birds in New York that fit the profile of this illness. They have received increased numbers of dead bird reports due to widespread media coverage, increased public awareness, and their own recommendations to report any suspicious bird deaths. Dead bird reports in the states where the illness was initially found have now decreased.

A statement from DEC said the agency will continue to monitor bird populations for signs of the illness and to stay informed on the status in other nearby states.