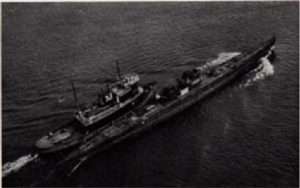 Many unusual craft have passed through New York’s several natural and man-made waterway systems through the years. A remarkable vessel that was certainly one of the most unique to travel the waters of the Empire State was the German submarine U-505, captured by the Unites States Navy during the Second World War.

The Unterseeboot (U-boat) was one of the most feared weapons in the German arsenal. The stealthy nature of the submarine, and their predatory method of attack on merchant shipping, made the U-boats one of the most formidable threats to shipping in World War Two. The efficiency of the Kriegsmarine (German Navy) was brutally demonstrated against European enemies years before the United States entered the war. Following U.S. involvement, the U-boats were the only sustained threat to the American mainland. The subs lurked just off the coast, using the glow produced by the larger coastal cities to backlight their targets into easily marked silhouettes.

Due to the closing of the Delaware and Raritan Canal in New Jersey in 1933, the United States was without the internal navigation system it had relied upon during other international conflicts. Lack of aerial patrols early in the war made easy prey of merchant shipping to the practiced German submariners. The U-505 was involved in the “easy pickings” along the U.S. coast.

The Kriegsmarine was able to maintain their Feindfährt (war patrols) by resupplying the deployed U-boat fleets from other specially designed submarines, referred to as Milchkuhe (milk cows). These supply craft carried replenishments of fuel, food and torpedoes to the far-flung attack fleet. These rendezvous were arranged by radio, using coded messages. Germany had developed a coding system that seemed unbreakable; the obscure and ambiguous system was referred to as “Enigma.” This mechanical encoding device used three type wheels rotating about a common spindle. The three wheels moved at different speeds, fast, faster, and fastest.

This insured that if a single letter was repeated, the advancing second and third wheel would change the encryption, displaying a completely different character. This code system was reliant on a mechanical encoding machine, which resembled a portable typewriter, making the Enigma machine an invaluable prize for the Allies. 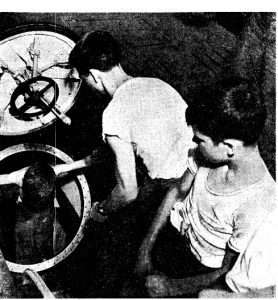 The U-505 was launched in 1941 at Hamburg, an IX-C class vessel, which carried 21 torpedoes. Powered by two diesel engines, the craft could steam at 18 knots on the surface; submerged speed was about 7 knots, with a maximum dive-depth of only 600 feet. The U-boat needed to operate on the surface two hours in each twenty four-hour period to recharge the batteries used in underwater operation. The U-boat was 252 feet long, and crewed by 60 men, 56 enlisted and four officers. The U-boat operated in shifts, with only 36 bunks in the limited space onboard.

The U-505 sank a sailing ship in July 1942, breaking an unwritten rule of the sea. From that point the vessel wore the albatross, curse of the ancient mariner, bad luck for both ship and crew. Shortly afterward, Captain Olaf Loewe experienced appendicitis, and was rushed to occupied France. The new Captain, Peter Zschech, lacked the confidence of the crew.

On November 10th, 1942 the U-505 came under aerial attack by a British Hudson bomber. It was equipped with wasserbomben (depth charges) that could be used to attack sighted U-boats. The Hudson’s attack on the U-505 inflicted heavy damage, and as the aircraft turned in a steep bank to deliver the fatal blow, a malfunction aboard the bomber caused the airplane to explode. The U-505 cruised on the surface to Lorient, France one of the most damaged submarines to ever return.

The U-505 required six months of repairs, following which the vessel experienced a main engine failure at sea, victimized by saboteurs and contaminated lubricating oil. This required more repair time at Lorient; U-505 was not ready for service until the autumn of 1943. On this first patrol after nearly a year, the U-505 came under an enemy depth charge attack during which Captain Zschech, inexplicably, failed to take the proper evasive measures. The captain suffered from what the submariners would refer to as Blechkoller, loss of emotional stability during a depth charge attack. With his service revolver, he committed the only suicide of a Kriegsmarine commander during the war. The damaged U-505 survived the attack and again returned to occupied France for repairs.

The vessel put to sea again December 25th, 1943 with a new skipper, Oberleutnant Harald Lange. The U-505 was dispatched to patrol in the south Atlantic, off the coast of French West Africa. On June 4th, 1944 the U-505 was low on battery power and forced to surface. The submarine encountered an American task group under Captain Daniel V. Gallery on his flagship, the pocket carrier USS Guadalcanal. This fleet, a hunter/killer group, had the express mission of locating and destroying U-boats. Aircraft from the carrier and five destroyers initiated an attack on the quickly submerging U-boat.

The damaged inflicted and the might of the attack force was inescapable, and the German sailors surrendered, with the intention of destroying the U-boat after evacuating. The capitulating submariners opened the sea valves, allowing the ocean to pour into the U-505. Most likely, Captain Lange would have given the orders to fire scuttling charges after the crew was brought on deck, but he was hit by gunfire while exiting the hatch by the destroyer crew, who did not understand the U-boat’s intention to surrender.

U.S. Naval Commander Earl Trosino, of Philadelphia, with several other men from the USS Pillsbury, in an act of tremendous bravery entered the sinking sub. They located and closed the sea valves, preventing the craft from sinking. The U-boat had been captured, along with its valuable Enigma encoders and other vital Kriegsmarine documents.

The U-505 is said to be the first vessel captured by the United States Navy since the War of 1812. Captain Gallery did not want the German command to realize that the sub had been captured, fearing that they would revise all the Enigma codes. He instead made all efforts to simulate that the U-505 had been sunk. The USS Guadalcanal towed the sub to isolated Bermuda, to preserve capture secrecy.

The German crew was later incarcerated in a special prisoner-of-war facility in Louisiana that isolated them from the rest of the world for the duration of the war. The knowledge gained through the capture of the U-boat was tremendous, as the Enigma code was broken progressively, with all successes building upon the previous. Some experts estimate that nearly 300 U-boats were sunk because of the knowledge obtained in the capture of U-505.

After Nazi Germany surrendered in May 1945, the U-505 was paraded on a War Bond selling promotion to East Coast cities, which included both Pier A at the Battery and Pier 88 at the foot of West 49th Street in New York Harbor. The U-505 was later commissioned into the U.S. Navy, and designated USS Nemo. The craft was declared surplus in 1953, and planned for sinking as a maritime weapons experiment. Instead, the Museum of Science and Industry of Chicago and the citizens there, home of Admiral Gallery, expressed interest in the U-505 and preserving the craft as a permanent exhibit, and as a memorial to the Battle of the Atlantic. 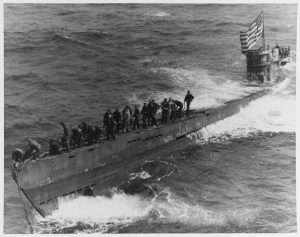 The U-505 was taken in tow at Portsmouth, New Hampshire by the Moran Towing tugboat, Pauline L. Moran, on May 16th, 1954. The tug towed the U-boat up the Atlantic coast, through the Gulf of St. Lawrence and into the river, five years prior to the opening of the Seaway.  This route was chosen over the New York State Barge Canal because of the U-boat’s 4.7m draft, even though the Canadian St. Lawrence locks were dimensionally smaller than those of the Barge Canal, and the route many miles longer.

The U-505 created quite a stir in many of the border towns it passed on its way “up the lakes.” Admiral Gallery flew to the Empire State for a surprise visit. From Ogdensburg, he boated across to the north shore of the St. Lawrence to join the submarine crew as they passed through the Morrisburg, Ontario lock in a breast-tow provided by the tugboat. Moran Towing made no charge for the tow to Buffalo, making their efforts a contribution to the eventual memorial. The June 1, Buffalo Evening News reported, “the ugly silhouette of an enemy submarine crept through the Buffalo Harbor today. . . giant white letters on the conning tower identified it as the U-505.”

The sub was docked at the Coast Guard Base in Buffalo Harbor and turned over to the USCG Cutter Kaw for transport to Cleveland on the second leg of the 3000-mile tow to Chicago. The pilot in command of the U-505 during relocation was Earl Trosino, who led the capture of the U-boat and was given a paid leave by his employers at Sunoco.

The U-boat was hoisted from the waters of Lake Michigan on September 3rd, 1954, and rolled on a special rail system across Lake Shore Drive to the Museum of Science and Industry. The U-505 became a permanent exhibit and a cenotaph to the sailors who fought the Battle of the Atlantic. The memorial was dedicated on September 25, 1954 in a ceremony that included radioman second-class Stanley E. Wdowiak of Maspeth, Queens, a member of the boarding party and Fleet Admiral William F. (Bull) Halsey as the principal speaker. Admiral Halsey stated “the U-505 will always remind the world that Americans pray for peace and hate to fight, but if we have to, we fight like hell.”

Photos, from above: capture of German Submarine U-505 courtesy Naval History & Heritage Command; boys aid one of their buddies out of the hatch of the U-505 after inspecting the German Submarine courtesy New York Times; and Tugboat Pauline L. Moran employing a breast-tow to move the U-505 through the St. Lawrence River at Alexandria Bay courtesy TowLine Magazine June 1954.