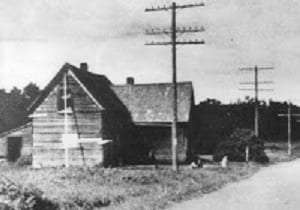 A closer look at Brown and the his family, however, reveals an experience typical of many Americans, then and today, and the importance of North Elba in Brown’s plans for a raid into Virginia.

Beginning as child on the Ohio frontier, and ending at his farm in North Elba, Brown’s life trajectory was a struggle to survive under the new capitalist system then taking shape in America. Biographer David Reynolds called him an “earnest, stubborn man victimized by the risky new American economy.” The historian also suggests that Brown saw parallels between what critics called the “wage slavery” of the new capitalism with those held in bondage for labor in the slave economy.

John Brown’s movement from place to place kept pace with his own search for economic sustainability for his family in trying times. In the 1840s and 1850s some twenty percent of Americans moved each year. From New York, Ohio, and New England, and the entire eastern seaboard, young Americans left their farms for the Midwest and beyond. Establishing new businesses, failing, trying again, speculating on land, always seeking greener frontier pastures in order to start anew.

Between 1837 and 1842 Brown suffered four business failures. Using credit he bought land that would have made him a bundle, had he been able to hold onto it through the Panic of 1837 (which precipitated a five-year depression). There were some 850 banks in the United States at the time, 343 failed completely and another 62 banks partially failed.

The crisis brought record high unemployment (a half million people were out of work in the summer of 1838) and the demise of the plans of many budding American businessmen – including John Brown (and also the first plan to extend a railroad into the Adirondacks, but that’s another story). When Brown’s wool merchandising business failed during another economic downturn in 1848 he turned to begin a again, in remote North Elba where he felt he could also fulfill his ever growing desire to help America’s African-Americans.

Brown bought 244 acres at $1 an acre from Gerrit Smith to help support the black families moving to Smith’s lands in the Adirondacks. Beginning in 1846 Smith (a member of the Secret Six) had offered black families a refuge from their economic conditions – 40 acres of their own, and a chance to vote.

In May 1849, ten years before Harpers Ferry, years before the fame of Kansas and Old Osawatomie Brown, John Brown moved his family to North Elba. They moved into a house rented from Chapin Flanders which Brown’s eldest daughter Ruth later described:

The little house of Mr. Flanders, which was to be our home, was the second house we came to after crossing the mountain from Keene [on Old Mountain Road]. It had a good-sized room below, which answered pretty well for kitchen, dining-room, and parlour; also a pantry and two bedrooms; and the chamber furnished the space for four beds – so whenever ‘a stranger or wayfaring man’ entered our gate, he was not turned away.

John Brown stayed behind in Springfield, MA to attend to his business. He traveled to England and throughout Europe (even visiting the Waterloo Battlefield) and then again throughout western Virginia, Ohio, and Pennsylvania attending to debts and deals. In September 1850 he arrived at North Elba, an average struggling American increasingly concerned with the way generations of some Americans were being treated.

He showed his Devonshire cattle at the Essex County fair. “The appearance upon the grounds of a number of very choice and beautiful Devons, from the herd of Mr. John Brown,” the 1850 Annual Report of the Agricultural Society noted, “attracted great attention, and added much to the interest of the fair.” Within the year several more Devons were brought into the county by local farmers. Brown also witnessed the marriage of Ruth to Henry Thompson, a North Elba neighbor who was himself an abolitionist.

Adirondack historians have often downplayed the role of North Elba in the making of John Brown. The most prominent offender was Adirondack historian Alfred Lee Donaldson, who exhibited an early 1920s racist interpretation of Brown and his connection with Timbuctoo, the community of black settlers in North Elba. “The natural gregariousness of the race tended to defeat the purpose of the individual [black] holdings,” Donaldson wrote in 1921, “the darkies began to build their shanties in one place, instead of on their separate grants.”

Donaldson poked fun at the “dilapidated red flag… bearing the half-humorous, half-pathetic legend Timbuctoo.” According to Donaldson “those who stayed permanently were roused to spasmodic activity by Brown,” who the historian all but accuses of taking advantage of the black farmers he had settled with. “Unless directed by him,” Donaldson wrote, “they did nothing for themselves or their own land.” Mimicking an 1859 essayist with southern sympathies, the eminent Adirondack writer declared the whole project a failure, with even Brown becoming disillusioned by 1851. The assertion would be laughable, if it had not carried so much water for racists and their sympathizers ever since and generally misinformed generations of Adirondackers.

The truth of North Elba was that it was perhaps the most important place in John Brown’s life and seminal to his understanding of African American culture. He hoped his wife Mary would live there after his death, and made it known that if he should be killed by the slavers or their minions, he was to be buried there.

During the summer of 1854, while Brown was in Ohio tending his farm there, tensions in Kansas rose to the boiling point. Three of his sons, Owen, Frederick, and Salmon left that fall to join the free-soil forces, by the following spring they were joined by their brothers John Brown Jr. and Jason at what was then called Brown’s Station. Old John Brown encouraged his sons, but in a letter written in August 1854 he told them he would not join them because “I feel committed to operate in another part of the field.” That field, was Virginia. On September 30th 1854, Brown wrote to his family in North Elba:

After being hard pressed to go with my family to Kansas as more likely to benefit the colored peopled on the whole than to return with them to North Elba; I have consented to ask for your advice and feeling in the matter; and also to ask you to learn from Mr. Epps and all the colored people (so far as you can) how they would wish, and advise me to act in the case, all things considered. As I volunteered in their service; (or the service of the colored people); they have a right to vote, as to the course I take.

In the summer of 1855 John Brown finally moved the rest of his family to North Elba and began planning for a raid on southern slaveholders, assembling weapons and other supplies at the farm his son-in-law Henry Thompson built for the Brown family. Brown had been ready to set out for a raid on Virginia, but after consulting with his North Elban neighbors, he and Thompson set out together for Kansas that fall instead. As the Missouri-Kansas Border War raged, the Browns reported back to the community at North Elba what was taking place on their behalf. Henry Thompson’s brothers Dauphin and William would later die at Harpers Ferry.

I’ll let David Reynolds describe then, the importance of the community at North Elba to Brown, the cause of Abolition, the Civil War, and American history:

Brown engagement with black culture gained a deeply personal dimension at North Elba, where he may have failed to find recruits for his planned raid but where he gained new familiarity with and respect for individual African Americans…

In death as in life, then, John Brown was a North Elban. The blacks of North Elba affected the course of American history by helping him decide upon the direction of his anti-slavery activities. What would have happened had the Harpers Ferry raid come off four years earlier than it did? No one can say, but there is evidence that it could have occurred as early as 1855, possibly even 1854. Largely because of a decision made by black colonists at North Elba, Brown deferred his plan.

As we’ll see later in this series, his execution and the return of his body to North Elba, the community at North Elba continued to hold an important place in African American history.

Photo: The house rented from Chapin Flanders by the Brown family in North Elba. It still stood in the 1920s on Route 73, opposite the road to Adirondack Loj near what is now the Craig Wood Golf Course. It is believed to have been destroyed by fire in the late 1920s.