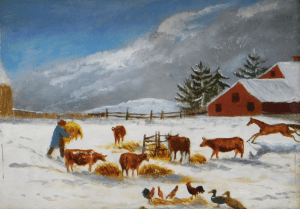 Visions of chestnuts roasting on an open fire come December could be squelched if Jack Frost nipped at your nose in September.

“We have good promise of a fine crop of chestnuts. Frost holding off is favorable for large nuts with rich meats,” the Fort Ann correspondent reported in The Granville Sentinel on September 22nd, 1876.

A week later, the frost had held off and optimism prevailed.

“Chestnut burrs are expected to burst with a broad grin within a fortnight,” the Sentinel reported.

Potatoes and oats looked promising too. “Our farmers are pleased with present very favorable weather. Fall feeds doing finely while the promise of a fine crop of late potatoes is every day of warm weather made stronger,” the Fort Ann correspondent reported.

“Many of our farmers are threshing their oats and report the crop good – the grain very fine,” the Sentinel reported.

“Old Sol is evidently making up for lost time. His rays produced a degree of warmth during the past week in keeping with the requirements of the season,” The Morning Star of Glens Falls reported on September 9th.

But a chill quickly set in, “The cold wave struck Glens Falls Thursday night and will soon penetrate to the coal bins. Winter flannels are in order,” The Morning Star reported on September 15th, and two days later, “The temperature last night suggested the necessity for coal fires.”

In 1885, there was a light frost in the Glens Falls area on September 5th, but no crop damage was known to reporters.

“The cold wave creates a demand for over coats and coal fires,” The Morning Star reported.

“The frost has cut through corn though out the town. It will be a small crop,” the Wevertown correspondent reported in The Morning Star on September 11th. “Yesterday (in Glens Falls) was one of the brightest and most extraordinary days of the season. The atmosphere was all that could be desired.”

Yet, Mother Nature seemed to think that it was winter.

“The autumnal line storm arrived promptly at the advertised hour, but it took a bad cold in its infancy,” The Morning Star reported on September 24th.

Rain began to fall about half-past 12 o’clock yesterday morning and continued until seven, when the wind, which was blowing heavily, shifted to the north, and the thermometer fell rapidly, bringing heavy overcoats and wraps into requisition.”

There was a dusting of snow in many parts of Glens Falls, and two inches accumulation on the peaks of Mount Ferguson, Black Mountain and Buck Mountain.

“Several of the mountains surrounding Lake George presented themselves in snowy caps to the early risers who still tarry at the well-known resort.”

The next year, “quite a heavy frost” hit Lake Luzerne on September 2nd, but generally weather in Glens Falls was favorable.

“The weather yesterday was warm enough to suit the most cold-blooded mortal,” The Morning Star reported on September 11th. “Man and beast suffered under the rays of a scorching sun. Very little air was stirring, and the shady side of the street was a premium.”

Elsewhere in the region, drought was a bigger worry than frost.

“Should the warm, dry weather last much longer, many of our farmers will be obliged to drive their stock to the famous Hudson (River) for water, as many pond holes and cisterns are getting very low,” The Granville Sentinel reported on September 10th, 1886. “Farmers complain that the late potato crop is ruined by the drought.”

The rain did come.

“The rain which fell Sunday was welcomed by all. The air since has been better suited to a comfortable existence,” the Sentinel reported on September 17th. “Cisterns were replenished, the dust washed from the trees, grass and foliage so that we can see them in natural beauty…. Truly, autumn has many enjoyments.”

More rain would have been optimal.

“Our farmers are cutting corn and digging potatoes, anxiously awaiting more rain to soften up the ground so they can commence their fall ploughing,” the East Fort Edward correspondent reported in The Sentinel on September 24th.