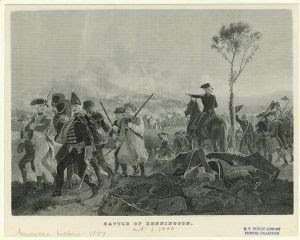 A one-day bus tour, “The Road to Bennington: New Insights on Stark’s Victory,” featuring sites important to the Bennington battlefield on the Walloomsac River, will be led by Michael Gabriel and Bruce Venter on Friday, September 24th.

During the summer and fall of 1777, Lt. Gen. John Burgoyne led a combined force of some 9,000 British Redcoats, German hirelings, Loyalists and Native Allies. Burgoyne’s invasion was part of a three-pronged strategic plan to break the back of the rebellion. His army marched directly south through a near-impenetrable wilderness, attempting to reach Albany. But American fortunes changed decisively on the west bank of the Hudson River near Saratoga. The surrender of Burgoyne’s army in October 1777 was more important to the Patriot cause than any other single event during the American Revolution; this “turning point” arguably led to Yorktown four years later. The battle of Bennington may have also been a “turning point” in the campaign itself.

This tour will pick up Burgoyne’s invasion as his army reforms at Skenesborough after defeating both a Patriot rear guard at Hubbardton and the remnants of Maj. Gen. Arthur St. Clair’s retreating army at Skenesborough. The tour will follow Burgoyne’s march from Whitehall, thru Fort Ann to Sandy Hill (present-day Hudson Falls), visiting the final resting place of Jane McCrea to tell her story and its impact. The tour will also follow Lt. Col. Friedrich Baum’s route to the Walloomsac where it will visit four battle sites: the German Redoubt, the Tory Redoubt and the fighting at the bridge, plus the site where Lt. Col. Heinrich von Breymann’s relief column was stopped by Col. Seth Warner’s Green Mountain Boys.

Dr. Michael P. Gabriel is the author of The Battle of Bennington: Soldiers and Civilians (2012), Major General Richard Montgomery: The Making of an American Hero and numerous articles related to Revolutionary America. He is a history professor and chair of the history department at Kutztown University in Pennsylvania and has lectured several times at Fort Ticonderoga. His most recent book is Physician Soldier: The South Pacific Letters of Captain Fred Gabriel from the 39th Station Hospital.

Dr. Bruce M. Venter, president of America’s History, LLC is an experienced tour leader of the Revolutionary War period. He is the author of The Battle of Hubbardton: The Rear Guard Action that Saved America.

The cost for this tour is $125 and registration is required. The bus will leave the main parking lot of Fort Ticonderoga at 8 am and return by 5 pm. For more information or to register, click here.