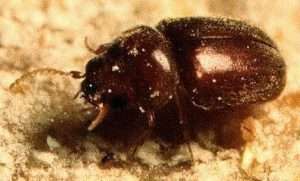 Even if you have a top-notch security system, you could still return from vacation to find that your prescription drugs, tobacco products, rice, dog food, or other items have vanished. And you’d be on your own to solve this crime because the police would tell you to bug off.

While not as prevalent as they were a couple generations ago, there are perhaps a dozen insect species in our climate that dabble in home invasions to pilfer meals. Collectively they’re called pantry pests, although some of them have fetishes for leather – I’ll spare you the details – and other things not normally found in kitchen cabinets.

The first time I heard about drugstore beetles (Stegobium paniceum) it conjured an image of giant bugs hanging around a 1950s-era corner drugstore in muscle shirts as they shook down school kids for pocket change and smoked with their cousins the cigarette beetles (Lasioderma serricorne). I figured these characters must have wound up in reform school, disappeared when the Vietnam draft kicked in, or got into a batch of drugs laced with DDT.

In reality, drugstore beetles were named for their habit of eating pills of all kinds back in the days before secure packaging. They munched medicine not for the drugs (or so they probably claimed), but for the corn starch, guar gum, and other edible compounds which are still used to bind tablets into shape. In addition to the fact the law requires it, another reason to keep drugs in their original containers is to avoid drugstore beetles. I mean, good luck convincing a doctor that bugs ate your painkillers, right?

Cigarette beetles love all manner of tobacco products, but they and their drug-seeking relatives will eat anything from cayenne pepper to garlic powder to leather upholstery and dried fish. Both species are about an eighth-inch long, oval-shaped, and light brown in color.

Wool rugs and carpet pads look like dinner to the four species of carpet beetles (Attagenus spp.) which are found in NY State. But they won’t go hungry in an apartment with hardwood floors – carpet beetle menus are diverse and include beans, dead insects, cotton, feathers, and more. Round to oval, highly varied in color and and roughly a quarter-inch long, they sometimes find their way indoors on items gleaned from rummage sales, flea markets, or the trash.`

Of course other insects make babies in flour, cornmeal, breakfast cereal, and the like. The confused flour beetle (Tribolium confusum) gets my vote for its name if not its behavior. There are four closely related flour beetles which all have essentially the same bad habits. Adults are more elongate, and range from one-eighth to one-half an inch long. Most are brown, though one species is blue.

One of the most common pantry pests in North America today is the Indianmeal moth (Plodia interpunctella), which Microsoft Word has decided to call the Indian meal moth. A native insect, it does not occur in India, but at least it’s a moth. The slender adults are about a quarter to five-eighths of an inch long. With their brown and beige two-tone pattern they’re aesthetically appealing, but their miserable maggots will infest nearly any kind of dry food. These are just one of the critters that leave webbing behind in the rolled oats or rice as a calling card.

Over the past twenty or so years the snack-food industry wised up to bugs and invented a bag that requires a chainsaw to open. I’m sure the military uses the same technology in tank armor. But pantry pests look at ordinary plastic bags the way Freddy Krueger views a screen door – “You seriously think this will keep me out?” I’m confident researchers will one day photograph the smirk on a flour beetle’s face as it slashes though a bread bag and steps inside. Molded plastic containers and glass jars with tight-fitting lids are the safest way to store dry goods.

If you buy in bulk for economy, consider getting a chest freezer in which to store excess flour, grain, spices and pet food. These things will stay fresher, but more importantly, a week at zero degrees F (-18 C) or colder will destroy any pantry-pest adults, pupae, larvae, or eggs that may be present.

If an infestation does occur at home, stay away from insecticides! Not only are they ineffective against pantry pests, most are highly toxic and remain so for weeks or months after application. They should never be used around food. Infested or suspect items can be discarded, or placed in a below-zero freezer for a week. Products such as rice can also be heated to 180 F (82 C) for three hours to destroy any insect life stages.