“What the last Thursday of November is to the American turkey gobbler, such is the first day of September to the American oyster. … The autumn brings back the magical ‘r.’” The Post and Gazette of Elizabethtown, in Essex County, reported on September 11th, 1879.

Oyster season, governed by tradition, not law, ran from September through April, months that had the letter ‘r’ in the name.

Oyster consumption generally was abstained from in May – August, warmer months when the shell fish spoils easily without refrigeration, although some grocers advertised, “oysters year-round.”

The start of oyster season was a cause for celebration.

“The return of months which proudly sport the letter ‘r’ is an event worthy of notice,” The Elizabethtown Post, reported on September 2nd, 1886.

“It always makes a stir in the community – an oyster in fact. The advent of the ‘delicious bivalve’ is no insignificant occurrence,” The New York World mused, in an editorial republished September 3rd, 1886 in The Morning Star of Glens Falls. ”On the whole it is pleasing to learn that a satisfactory season is before us. Let them come in all their glory and pristine strength of the new found ‘r.’”

The joy of dining on oysters dated back to antiquity. 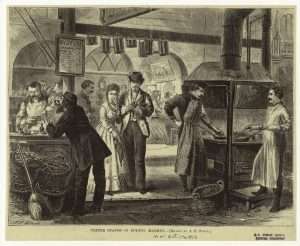 “The ancient Romans advanced the oyster and gave it a high place at their banquets. Its proud history appeals to us today with the sweet odor of ten thousand restaurants,” the editorial continued. “Welcome then, the oyster and the months that ‘r’ upon us.”

The Elizabethtown Post, starting with the premise of Irish satirist, politician, playwright and poet Richard Brinsley Sheridan that, “An oyster may be crossed in love,” explored whether oysters experience romantic attraction.

The conclusion was that it was a moot point.

“That a satisfactory oyster season is before us, is to a great extent immaterial,” the paper editorialized. “No one knows for certain whether they are capable of passion, but is well established that they can be fried, broiled, scalloped, roasted, stewed, baked or served up now. Let them come in all the glory and pristine of the new-found ‘r’.”

Nevertheless, an oyster could be an ideal date, The Morning Post punned on April 6th, 1887.

“Although not talkative at all, the oyster is a very pleasant dinner companion.”

Some scoffed at the ‘r’ rule, which prohibited eating oysters in the warmer months.

“Oyster dealers aver there is no truth in the old hack that ‘oysters are not good in any month that does not contain an ‘r’ in its name,” The Morning Star reported on June 8th, 1885. “They say the toothsome bivalve is as welcome in summer as in winter, if not kept too long.”

Oysters stay fresh in summer months provided they are stored on ice, The Essex County Republican of Keeseville editorialized on September 14th, 1882.

“A good oyster, to epicurean tastes, is a luxury the year round,” the paper maintained.

Yet, year-round oyster connoisseurs were in the minority.

“Quite a good many New Yorkers have of late years rebelled against it and eaten shell fish all summer, without experiencing the slightest inconvenience in consequence,” The Post and Gazette reported. “For the majority of people, however, the ‘r’ in the month is still a sort of sauce without which the king of shellfish is never to be consumed.”