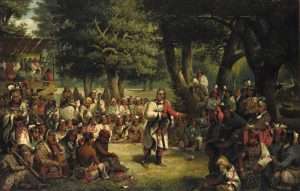 The Hendrick Hudson Chapter of the Daughters of the American Revolution 2021 speaker series, honoring Constitution Week, will continue on September 20th with a discussion on the US Constitution and its relationship to Native Americans.

The talk will be led by Heather Bruegl, a citizen of the Oneida Nation of Wisconsin and first-line descendant Stockbridge Munsee.

The US Constitution, adopted in 1787, was not written with this continent’s first peoples in mind. This talk will focus on the Native American perspective of the Constitution, and aims to broaden Americans’ understanding of this fundamental document.

Bruegl, who holds a BA and MA in US history, developed a passion for Native American history after a visit to Wounded Knee in South Dakota. Formerly Director of Cultural Affairs for the Stockbridge-Munsee Community, she now serves as Director of Education for Forge Project, a new Hudson Valley-based initiative that supports Indigenous communities and leaders working in the arts, food sovereignty, and language revitalization. She has spoken to numerous groups on topics such as Native American history, including policy and activism.

The talk begin at 2 pm and will be held via Zoom. Registration is required and can be completed online.

The chapter owns and maintains its meeting house, the Historic Robert Jenkins House, at 113 Warren Street in Hudson. More information can be found on their website, by emailing hendrickhudsonchapterdar@gmail.com, or calling (518) 828-9764.