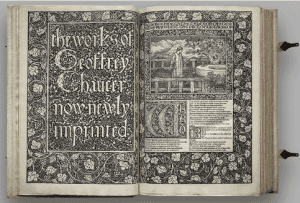 There had been forerunners of course. Horace Walpole’s Strawberry Hill Press, established in June 1757, set a precedent by producing splendid books, pamphlets, and ephemera, but it was Morris who succeeded in establishing a cost-effective press for high quality publications. His initiative gave birth to a host of similar undertakings. He initiated the Private Press Movement which was closely associated with the rise of modernist ideas. Morris also had a remarkable following in New York.

Anglo-American small presses in Paris would be of crucial importance to the rise of the American literary avant-garde.

William Morris was a major figure in the Arts and Crafts Movement, a loosely-linked group of artisans and architects who aimed at elevating the quality of applied arts in a revolt against the shoddiness of Victorian mass manufactures.

The movement developed in England during the latter half of the nineteenth century and was inspired by the demands for social reform by thinkers such as Walter Crane and John Ruskin. Their concept of high-standard design was linked to the dream of a decent society, one in which the worker was not brutalized by modern factory conditions but would take pride in his skills. The Arts and Crafts Movement promoted the revival of craftsmanship.

In January 1891 Morris combined his passion for medieval literature and his workshop ethic with the launch of the Kelmscott Press. The project was propelled by his social philosophy. Morris hoped to re-awaken the “forgotten” ideals of book making and inspire higher levels of production at a time when the printed page was at its poorest.

Morris’s masterpiece was the 1896 Kelmscott Chaucer. The 556 pages and eighty-seven illustrations of The Works of Geoffrey Chaucer, now newly imprinted, took several years to complete. It was the pinnacle of his career as a typographer and designer. In total 425 copies of the book were completed with the involvement of eleven master printers. The woodcut illustrations were designed by Edward Burne-Jones, a student of Dante Gabriel Rossetti, and one of the leading figures of the Pre-Raphaelite school.

This publication fulfilled Morris’s vision of what could be achieved through a combination of modern printing techniques and traditional crafts. Burne-Jones considered it the finest book ever produced and called it a “pocket cathedral.”

After the First World War a new generation of such presses came in operation. In Britain, the Golden Cockerel, the Nonesuch, the Vale Press, the Shakespeare Head, the Hogarth Press, and others, continued the tradition. On the Continent, the Zilverdistel, the Cranach Press, and the Officina Bodoni made outstanding contributions. They are part and parcel of the history of modernist movements.

A private press is a small undertaking for the (hand) printing of books with an emphasis on lettering, layout, binding, paper, illustration, and the like. At the same time it is more than that: printing is a statement, a world view, an alternative lifestyle. That certainly applies to the larger-than-life figure of Elbert Hubbard, a writer and publisher who had started his career as a traveling salesman for the Larkin Soap Company in Buffalo, New York (he was John Larkin’s brother-in-law).

On a walking tour of England in 1894, Hubbard paid a visit to the Kelmscott Press. Excited by Morris’s work and philosophy, he hurried back to New York to set up the Roycroft Press in East Aurora and spread the message of the Arts and Crafts movement across America. Describing himself as an anarchist (his booklet Jesus Was an Anarchist was published in 1910), Hubbard followed in the footsteps of John Ruskin, Leo Tolstoy, Henry Thoreau, and Walt Whitman.

In 1896 he published his first book, The Song of Songs, which was a poor attempt at imitating Morris’s style but he continued printing. His books stood out for having old-style type, hand-colored initials, and chamois covers. His Arts and Crafts Community of printers and bookbinders (calling themselves “Roycrofters”) attracted an increasing number of curious visitors. 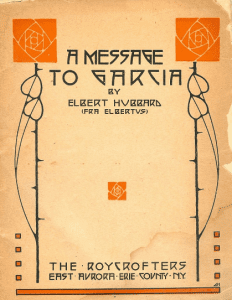 The anarchist soon turned capitalist. A hotel was built to house guests at the commune and Hubbard brought in skilled workers to produce a stylish line of furniture. The Roycrofters printed books on handmade paper, operated a bindery, and ran shops selling hand-made leather products and copper goods. Success turned his press into a commercial rather than private venture.

The community flourished and was at its peak in 1910 with over five hundred workers. By 1915, not only had Elbert written the inspirational pamphlet A Message to Garcia (1899) which sold millions of copies, but he was also publishing monthly magazines, The Fra: A Journal of Affirmation and The Philistine: A Periodical of Protest.

On May 7th, 1915, Hubbard and his wife were traveling to England aboard RMS Lusitania to begin a lecture tour. On that fatal day, the liner was sunk by a German U-boat off the southern coast of Ireland, killing 1,198 passengers and crew. Their son continued the Roycroft artisan works until 1938 when it was closed as their products became increasingly irrelevant to the public taste. 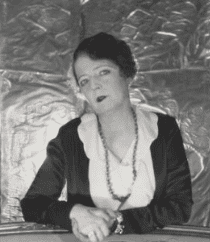 Maud Alice Burke was born in August 1872 in San Francisco, but was brought up in New York. In April 1895 she married Bache Cunard, the English grandson of the founder of the Cunard shipping line. He was more than two decades years her senior, the pair had little in common, and he preferred to live at his country house Nevill Holt Hall in Leicestershire, where he was a keen huntsman. Having soon tired with British provincial sporting life, Maud moved to London, changed her name to Emerald, and gained a reputation as a hostess with a taste for art and music. 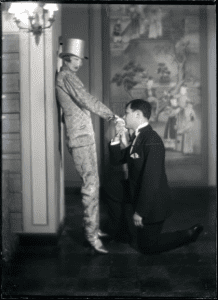 Maud became the close companion of novelist George Moore, and subsequently the lover and patron of conductor Thomas Beecham. She befriended and financially supported Wallis Simpson during the British abdication crisis in 1936 hoping that, if the latter eventually became Queen, she would be appointed one of her ladies-in-waiting. With the outbreak of the Second World War she returned to New York. Nancy Cunard was her only child.

After her parents’ divorce in 1911, Nancy lived with her American mother in the Cunard mansion at 7 Grosvenor Square, Mayfair. During the First World War, she married and (within two years) divorced Sydney Fairbairn, a cricketer and British Army Officer, and began writing poetry. Her collection Outlaws was published in 1921. During that period she was part of the literary revolution led by T.S. Eliot, Ezra Pound, and Wyndham Lewis (all of whom became her lovers). 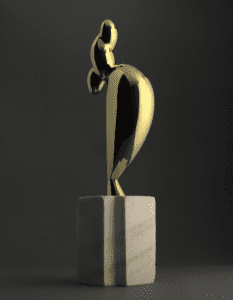 She settled in Paris in 1920 where she became immersed in the maelstrom of modernist literary movements. Her sharp intelligence and seductive beauty led to romances with many of the greatest writers of the era. She became an icon and trend setter of the Jazz Age. In 1924, Man Ray took her portrait with Tristan Tzara (her latest lover) as they were on their way to a fancy dress ball with Nancy wearing a gold brocade trouser suit, gold mask, and a top hat.

In Paris, Tzara introduced Nancy to fellow Romanian Constantin Brancusi – known as the patriarch of modern sculpture – who began his African-influenced masterpiece Nancy Cunard or “The Sophisticated Young Lady” in 1928 (it was cast in 1932).

Nancy passionately believed in the “sacred mission of art to change history.” This philosophy, inspired by Saint-Simon, led her to take over the Three Mountains Press in 1928 which she renamed the Hours Press. She acquired her Mathieu hand-printing press (manufactured in Brussels) from William Bird, an American expatriate and journalist who, in 1922, had started the Three Mountains and published work by Ezra Pound (who held a position as editor there from 1923), Ford Maddox Ford, and William Carlos Williams. 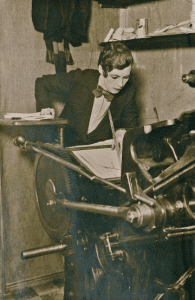 Bird assisted her setting up the press in a farmhouse in Réanville, Normandy, before she moved it to a small shop at 15 Rue Guénégaud on the Left Bank towards the end of 1929. The shop displayed works by Salvador Dalí and Joan Miró, as well as Cunard’s own collection of African and Oceanic art. She joined a group of Anglophone small presses in France, including Robert McAlmon’s Contact Editions and the Black Sun Press ran by Harry Crosby and Mary Phelps Jacob.

In its almost four-year run, the Hours Press published twenty-four titles and specialized in fine limited editions in a variety of bindings. Nancy’s association with the circle of Surrealists during the late 1920s influenced the design of her books as she commissioned artists such as Man Ray and Yves Tanguy for illustrations. 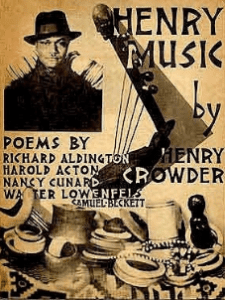 Staying in 1928 at the Hotel Luna in Venice, Cunard met African-American jazz pianist and composer Henry Crowder. Married to a seamstress who worked for Eleanor Roosevelt at the White House, he was a largely self-taught performer and bandleader from a poor Southern background who had first earned a living from music playing piano in Washington brothels. They fell in love.

Crowder became involved in the running of the press. She published a volume of his compositions and her poems with a photo montage by Man Ray as cover. She credited him with her interest in the American civil rights movement, including the infamous Scottsboro Boys case, involving nine black teenagers falsely accused and wrongly convicted for the rape of two white women in Alabama.

Their affair led to a permanent rift with her family, and she was disinherited. The backlash prompted her to write “Black Man and White Ladyship” in 1931, an essay in which she exposed the racism of her mother and society friends. It also motivated her to edit a massive Negro Anthology, published in 1933, which included poetry, fiction and non-fiction by African-American authors, including Louis Armstrong, W. E. B. DuBois, Langston Hughes, and Zora Neale Hurston (Samuel Beckett translated most of the French contributions for her anthology). 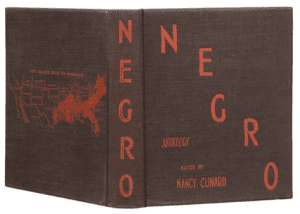 The book included a section of photographs and one of scholarly texts on African art, copiously illustrated with objects from private collections like Paul Guillaume’s (the art dealer who had organized the important exhibition “Première Exposition d’Art Nègre et d’Art Océanien” in 1919) and from public ones: the British Museum, the Trocadéro in Paris, and the Belgian Congo Museum. The anthology remains a monument to black art and literature.

In the mid-1930s, Cunard turned her fury against Fascism, writing about Mussolini and Franco, and organizing relief missions for Spanish refugees. She was one of the most vocal anti-fascists of her generation. After the Second World War she continued campaigning for civil rights and human dignity. In 1948, she sailed from Jamaica to England aboard HMT Empire Windrush in a gesture of solidarity with the first wave of Jamaicans to arrive in Britain.

Nancy Cunard died in 1957 and is buried at Père Lachaise in Paris, the resting place of many writers and artists she had encouraged and supported during her life time.