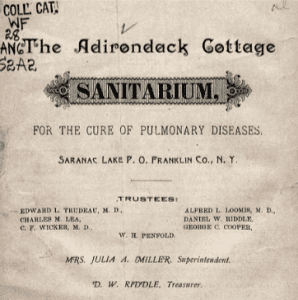 Following current climate-therapeutic theories that promoted the relocation of patients to regions with atmospheric conditions favorable to recuperation, he moved to the Adirondack Mountains. Seeking as much open air as he possible could, almost continuously living outside, he subsequently regained his health. In 1876 he settled in Saranac Lake and established a small medical practice. It was the beginning of a remarkable career and a new chapter in American medical history.

The Industrial Revolution marked a turning point in our relationship with the environment. New production systems delivered more goods for consumption, but in the process natural resources were exploited, poisonous fumes emitted, water and soil polluted. Burning coal produced an “ink-sea of vapor, black, thick, and multifarious as Spartan broth” (Thomas Carlyle).

City streets were covered with grease, the sky smeared with soot. Factory chimneys blocked out natural light. A dramatic rise in population exacerbated the effects of contamination. Urban life became unbearable. For most city dwellers physical nature was mere memory. Slag-heaps were a more ‘normal’ landscape than shrubs and bushes. Those who could carry the cost of escape fled to the suburbs.

Disease accounted for many deaths in industrial cities. The poor lived in cramped homes and worked in dirty factories. Children developed rickets and bone deformities. With a chronic lack of hygiene or sanitary care, no clean water, and no knowledge as to what caused diseases, epidemics such as cholera, typhoid, and typhus could be devastating.

Known as phthisis and consumption from Hippocrates through to the nineteenth century, the term tuberculosis was introduced in 1834 by the German physician Johann Lukas Schönlein. For considerable time, the widely accepted miasma theory had suggested that epidemics were caused by noxious “bad air” emanating from rotting organic matter. Eventually, medical science realized that invisible micro-organisms were the source of contagion by which germs could jump from person to person in crowded cities.

The epidemic wasting disease of TB became associated with the process industrialization which had forced a poorly nourished working class to live in drafty and damp dwellings. Between 1810 and 1815, the disease accounted for more than twenty-five percent of deaths in New York City. In 1900, it was still the country’s most common killer. Fear of the “graveyard cough” is reflected in such names as “white death” or “great white plague” (white referring to the anemic paleness of those affected).

From the mid-nineteenth century to the mid-twentieth century specialist sanatoria were designed to isolate and protect well-heeled patients. Physicians advocated the jour médical, a regime of treatment that required a lengthy residence at a clinic. During the 1860s the twin villages of Davos Dorf and Davos Platz became a destination for European patients as the valley’s micro-climate was recommended for lung sufferers.

Brehmer’s encouragement of heliotherapy was a medical reversal. In the millennia preceding the industrial revolution, pallor was popular within the ruling classes, hinting at a noble life of leisure spent indoors. Whiteners to create a pale skin were widely used. Dark skin was associated with servitude and suggested toiling on the land. Industrialism halted the bourgeois preference for paleness. Physicians insisted that exposure to the sun would cure vitamin-deficiency diseases and enhance public well-being. Sunlight was thought to destroy the tubercle bacilli.

In 1882, Trudeau took notice of Hermann Brehmer’s ground-breaking methods in treating TB. Following the German example he founded the Adirondack Cottage Sanatorium in February 1885. The first patients were two sisters who had been factory workers in New York City. They were treated in a one-room cottage named “Little Red.”

In February 1897 Trudeau published an essay on “Sanitaria for the Treatment of Incipient Tuberculosis” in the New York Medical Journal in which he stressed the invigorating influence of a life spent out of doors. Being exposed to the severity of atmospheric conditions in the Adirondacks proved to be the best stimulant to the patient’s assimilative powers. The combination of pure air, hygiene, unspoiled nature, nutritious food, moderate physical exercise, and a routine of complete rest equaled health and well-being.

Trudeau insisted that a sanatorium should consist of a set of pavilions connected by galleries and constructed in a manner that each ward could be kept dust free. Ventilation and an abundance of sunlight were vital. In order to achieve this, he developed a cottage plan. The Adirondack Sanatorium cottages were one-story buildings with a capacity for four or five. Each patient had his/her own room which opened into a central sitting area with a veranda (the ubiquitous Saranac Lake “cure porch”) on which outdoor treatment was carried out. The library, recreation pavilion, chapel, and infirmary were all separate buildings.

If, Trudeau insisted, the same principle could be applied to the tenement house residents of New York, it would be a practical step in the direction of curtailing the ravages of TB. The medical world challenged architects to play their part in battling disease. 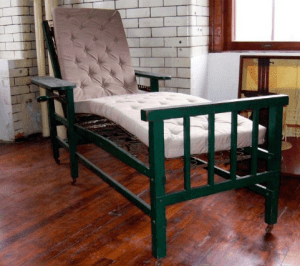 Modernism introduced an acute social awareness in architecture and design. Health and hygiene became principle criteria. The emphasis on improved social housing coincided with the exploration of new building materials and technologies. Le Corbusier expounded his radical ideas on building and planning in Urbanisme (1924). In Germany, experimental houses were built for the influential “Weissenhof Seidlung” exhibition in Stuttgart (curated by Mies van der Rohe). With an emphasis on air, light and hygiene, architects re-defined their ideas about urban housing. Flat roofs, balconies, and terraces became fundamental parts of design. The color of modernism was white.

The search for treatment of TB influenced the development of architectural thinking. In the 1930s new sanatoria were being constructed throughout Europe. They were designed with the dictum Licht und Luft (light and air) in mind. Between 1932 and 1940, high in the Alps of Northern Italy, the biggest sanatorium in Europe (Eugenio Morelli Hospital) was built in Sondalo. Known as “Sanatorium City,” it contained 3,500 beds, a post office, shops, and a cinema. The hospital was immortalized in Vittorio De Sica’s film Una breve vacanza.

Away from Alpine areas, sanatoria were located in wooded environments. In 1931 Dutch architect Jan Duiker built the Zonnestraal (sunbeam) sanatorium at Hilversum. A classic example of heliotherapeutic architecture, the building was designed in an airy manner using transparent materials. Open and glazed interior spaces were painted in pale blue and cream to exclude gloomy northern lights. Its flat roofs, terraces, verandas, and covered corridors, the sanatorium expressed both modernism’s ideal of rational functionality and adhered to the demands of medical treatment. 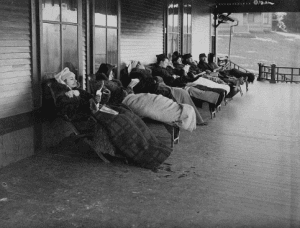 TB also inspired new furniture. Reclining “cure chairs” were part of a sanatorium’s outfit. The original design came from Peter Dettweiler who was a patient of Hermann Brehmer. In the early twentieth century, chaises-lounges in wood or chrome were designed by architects such as Alvar Aalto, Marcel Breuer, and Le Corbusier. Modernism promoted a therapeutic lifestyle in pursuit of health and hygiene. Dettweiler’s chair was taken as a model for the Adirondack Recliner, produced by George Starks at the Adirondack Hardware building at 28 Broadway in downtown Saranac Lake.

Over history, some diseases have been regarded as a badge of genius. In the eighteenth century gout had “patrician” pretensions. Voltaire, Smollett, Cowper, Fielding, and Joseph Banks were victims. These men represented Europe’s spiritual aristocracy.

TB was the Romantic’s illness. Sufferers of consumption took on the appearance of a pale and melancholic spirit. The disease was “celebrated” in the poetry of John Keats (who died of TB in 1821), Shelley and Byron. Chopin’s death from TB cemented its reputation as an affliction of artists. As consumptives wasted away physically, they gained spiritual resources. In the mythology of the disease, TB was an ailment of passion and “inward burning.” 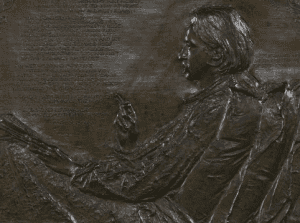 The later nineteenth century was obsessed with medicine, both literally and metaphorically. Émile Zola defined his task as a novelist in surgical terms, using his pen as scalpel. At the age of twelve, William Ernest Henley was diagnosed with TB of the bone, which led to the amputation of his left leg below the knee. In 1873, his other leg was affected, but thanks to a new antiseptic surgical method, it was saved. Henley stayed almost two years in hospital. A collection of twenty-eight ‘In Hospital’ poems was included in his debut Book of Verses (1888).

An early biographer of Robert Louis Stevenson argued that TB had enhanced the author’s talent. A sculptural relief by Dublin-born Augustus Saint-Gaudens (Irish mother; French father), depicts the novelist during a stay in New York City in 1887/8. The writer is portrayed with long hair, cigarette in hand, looking sharp and alert, despite being propped up by a stack of pillows in bed. Stephenson spent time in Davos as a patient. Illness enforced his creative presence.

End of an Era

After its founder’s death in 1915, the name Adirondack Cottage Sanatorium was changed to Trudeau Sanatorium. The institution also developed a school for nursing, and later the Trudeau School of Tuberculosis offering instruction courses in the latest treatment methods for the disease.

The first sanatoria were opened to paying patients. Trudeau’s institution also charged them, but at least made an attempt to treat poorer inmates at less than cost by active fund-raising. Many physicians and nurses served without pay. In Boston in 1889, the American Society of Climatology recognized the sanatorium as the best method of cure for TB, particularly for working-class patients. Sanatoria however remained a health haven for those who could afford the phenomenal cost of treatment (patients were held for long periods – from a minimum of six months to seven years or longer).

Before the First World War, the fight against TB was largely carried out by voluntary societies and spontaneous associations. The war brought new epidemics of the disease, forcing a more structured intervention. At last, the state became involved in organizing and planning healthcare and social solutions to the problems connected with the disease. In the end, science would supply the answers. After the discovery of streptomycin and the development of effective antibiotic drugs, the era of sanatoria came to an end. The Trudeau Sanatorium closed in 1954. It ruptured the close association between treatment, recuperation, and architectural design.

Illustrations, from above: first page of an 1887 Brochure (National Library of Medicine); Adirondack Recliner (Saranac Laboratory Museum); Sanatorium Zonnestraal, Hilversum, Netherlands; patients in “Cure Chairs” on a “Cure Porch” at the Cottage Sanatorium; and a detail of the relief of Robert Louis Stevenson sculpted by Augustus Saint- Saint-Gaudens (The Metropolitan Museum of Art).