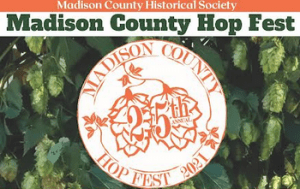 The 25th Annual Madison County Hop Fest is set for Saturday, September 18th and will feature Senator Rachel May (NYS District 53), who will describe the tax credit for the rehabilitation of historic barns bill introduced in the New York State Senate (S.6042) by Senator Michelle Hinchey of Saugerties on March 31st, and by Assemblymember Didi Barrett (A.6947) from Hudson on April 14th.

Both legislative houses unanimously passed the bill in June. The bill now awaits the governor’s signature. The 25% tax credit information addresses barns that were constructed prior to 1945. The session is included in the Hop Fest to strengthen preservation efforts of hop houses, as well as other agricultural buildings.

Joining Senator May in the discussion will be Michael A. Tomlan PhD, who directs the graduate program in historic preservation planning at Cornell, is the current president of the NYS Barn Coalition, authored Tinged with Gold: Hop Culture in the United States, and was the 1998 Madison County Hop King. The Barn Coalition was formed in 1997 to promote barn appreciation and restoration, and is still working to increase public awareness of barn preservation. Andrew Roblee, a graduate of Cornell Master’s program in Historic Preservation Planning, is the current President of the Preservation Association of Central New York (PACNY), works as an architectural historian for Environmental Design and Research, conducts historic resources surveys, provides visual impact analyses, and authored several National Register Nominations.

Barns provide a tangible connection to New York State’s agricultural beginnings. Their magnitude can be awe-inspiring but conversely daunting when it comes to funding their rehabilitation and reuse. Prior to 2017 NYS had a tax credit program aimed at lessening the financial impact, in the way of a 25% barn tax credit program. Unfortunately, as a result of changes in federal tax code under the Federal Tax Cuts and Job Act of 2017, the program was negatively impacted. In 2000, the New York State Office of Parks, Recreation, and Historic Preservation tried to help barn preservationists by creating the barn restoration program which gave out grants to people who wanted to fix their historical barns for useful purposes. More than 550 grants were awarded out of about 7,000 applications in the seven years of the program. By the time the program ended in 2007, about $12 million had been awarded statewide.

The discussion on the barn tax credit will be followed at 12:30 with Hop Houses of Madison County presented by Carl Stearns, and at 1 pm Hop Houses in Delaware, Montgomery, Oneida, Otsego, and Schoharie Counties presented by Al Bullard. At 2 pm information on the Onondaga Historical Association Brewseum in Heritage Hill Brewhouse at Palladino Farms in the hills of Pompey will be shared. At 2:30 pm Hop Collections, including tools, china, and memorabilia, will be described. The public is encouraged to attend the free hop heritage programs which will be held at the new Oneida Public Library located at 459 Main Street, Oneida. For more information call (315) 363-3050.