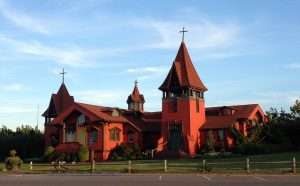 The Southampton History Museum will host an “Outsider’s View” garden and architectural history tour, featuring a self-paced and gently guided stroll down South Main Street to Gin Lane, on Saturday, September 11th from 1 to 4 pm.

This tree-lined thoroughfare boasts a collection of distinguished historic homes and gardens, and for centuries it has played a central role in connecting the Village’s downtown to its farms and beaches.

Known as the Edwin Post House, this residence was built prior to 1858 for a member of the Post family. From the early days of the settlement the family has figured prominently among the established landowning interests in Southampton. Maps from 1858, 1873 and 1902 list Edwin Post as owner of the house. A Long Island Rail Road brochure, published in 1877 to boost the early summer resort trade, includes a listing for a boarding house hosted by Edwin Post, and is believed to refer to 74 South Main Street. The Edwin Post House was said to accommodate 50 guests, which would have necessitated significant additions to the original structure. Upholding the family’s commitment to civic leadership, Edwin’s son, William J. Post, assumed the position of Town Clerk in 1888, while a cousin, Albert Post, served as the village’s first mayor after Southampton’s incorporation in 1894. 74 South Main Street has acquired a modern bay window and front stoop, but it retains its original front entrance with transom and sidelights.

In 1892, the Honorable and Mrs. William B. Hornblower purchased seven acres on the east side of South Main Street from the local Sayre family for $10,500, according to Sally Spanburgh’s book on the cottages of South Main Street. Their plan was to build a summer home which they would call Penrhyn (headland). Educated at Princeton and Columbia, Hornblower began his career as a lawyer specializing in bankruptcy. In 1893 he was appointed by President Cleveland to the Supreme Court but was not confirmed, apparently for political reasons. He seems to have stopped summering in the Shingle Style cottage himself in about 1907, renting it out instead. From 1927 to 1957 Penrhyn was owned by Dr. Eric McDonald and his wife, who commissioned Marian Coffin — one of America’s first professional female landscape architects — to design the cottage’s gardens. Following the McDonalds death, within a year of each other, their heirs continued to own Penrhyn for the next 17 years. Subsequent owners have included Isabel T. Bradley, who made many improvements to Penrhyn’s interior; Mica Ertegun, a well-known professional interior decorator; and Peggy Hill, a Broadway producer who was active locally in producing cultural events in Southampton. The current owner is making the gardens beautiful once again.

Built in 1913 for the son of Dr. Theodore Gaillard Thomas, who is often credited as the founder of the Southampton summer colony, this imposing brick dwelling was given the name Thanet House. Before building, the younger Thomas (also named Theodore Gaillard but known as T.G.) had rented the Sayre home, which had existed on the property previously. Active in real estate, T.G. commissioned Samuel Edson Gage as his architect. Gage designed it in the Dutch style but about ten years later, T.G. had it remodeled into the Craftsman style. T.G. kept the house for 28 years before selling it to Primrose Whitfield Gaynor. Two prominent Southampton physicians have occupied it in the years since: Dr. William C. T. Gaynor and Dr. Kenneth Wright. The Wright family found the house in disrepair and undertook a long restoration returning it to its former grandeur.

The Halsey House stands on property that was the home lot of Thomas Halsey Sr., one of Southampton’s founders. English Puritans who arrived in 1640 after stopping first in Lynn, Massachusetts, where they became dissatisfied with their situation, formed a company and obtained a deed for land on Long Island from the British authorities. In June they landed in Southampton where they came to terms with the Shinnecock tribe. In 1648 they moved from their initial settlement at Old Town to the present site of the village. Thomas Halsey, like the others, was allotted three acres to build a house on Town Lane (Main Street). In 1678 Thomas Halsey Jr. inherited his father’s house and property and circa 1683 built the house that he called the “new house,” now called the Halsey House. The house originally faced south but sometime between 1720 and 1740 Thomas Halsey Jr.’s son, Isaac, undertook an extensive remodeling that involved revolving the frame to face Main Street. The house, which remained in the Halsey family for several generations, was sold and enlarged over the years by subsequent owners, among them the Raynor, Pelletreau, White and Biddle families. In 1958 the Southampton Colonial Society (Southampton History Museum) purchased the Halsey House and restored it. Henry Francis DuPont was an influential member of the restoration committee and a generous donor to its work.

In 1900, Dr. Peter Wyckoff bought property on Gin Lane on Lake Agawam and had his architects design a 58-room half-timber English Tudor colossus for his family. The Wyckoffs were active in the social life of the summer community and locally philanthropic. In 1928, Dr. Wyckoff sold the house to Mrs. Jesse Woolworth Donahue, daughter of the five-and-ten magnate. Jesse Woolworth Donahue undertook an extensive remodeling of the house and the grounds, sparing no expense and when the property to the south became available the estate expanded to 15 acres with 610 feet of oceanfront. But Jesse’s efforts to crack Southampton society failed. With that failure and other personal setbacks — the fatal effects of drugs on her husband and son — she lost interest in the house, which was sold at auction in 1937. In 1940, Charles Merrill acquired the estate and demolished the main house to reduce taxes. What remains is the elaborate beach house added by the Donahues, which is now an elegant residence.

The Church is located at the foot of Lake Agawam and is one of Southampton’s most picturesque landmarks. Originally built as a life-saving station, it was acquired by Dr. T. Gaillard Thomas and donated as a church in 1879. A local carpenter was hired to create its rustic interior, including its 11 Tiffany windows. The church has come under assault from raging seas on several occasions, including in 1938 when it was nearly destroyed by a hurricane. It was restored and has twice been moved back from the sea. Though it is non-denominational, its summer services are organized under the direction of Southampton’s Episcopal Church.

A Champagne Reception with hors d’oeuvres and sweets prepared by Sant Ambroeus Restaurant will take place between 4 and 5:30 pm on the grounds of the Rogers Mansion, located at 17 Meeting House Lane.

Advanced registration is required and can be completed online or by calling (631) 283-2494. Tickets are $150 in advance, $175 on the day of the event. For more information or to purchase tickets, visit the Southampton History Museum website.