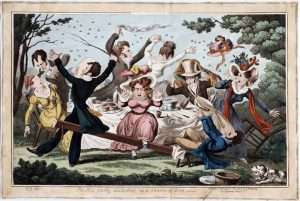 I’m not one to shed a tear when authoritarian rulers die, but once they’re gone, picnics become a lot more dangerous. Toward the end of summer, just in time for Labor Day picnics and County Fairs, the original queen in every yellowjacket wasp colony dies.

It’s not the stuff of Hamlet or some far-reaching conspiracy, it’s just that having a few thousand babies in the course of one season is enough to tire any Queen Mum to death.

With no one to keep the kids in line, the colony’s social order disintegrates. All summer long, yellowjacket workers are busy with good work like killing deer flies, tent caterpillars, and beetle larvae to feed the colony, not mention pollinating flowers. But once Queen Mum is gone, the rank-and-file wasps feel free to crash-land in your potato salad and explore the inside of your soft-drink can. They neglect their chores and go on a sugar binge. This is why yellowjackets, as well as bald-faced hornets and other colony-forming wasps, seem “aggressive” in the fall – they’re stuffing their faces with sweets ’cause no one’s watching over them.

Unlike honey bees, wasps and hornets can sting repeatedly without dying, so it’s good to know a few defensive tactics. Wear light-colored clothing, as dark or bright colors attract flying insects. If you’re off to the Fair or a late-summer outing, don’t use perfume, cologne, or strong-smelling soap or shampoo. These products will get you far more attention from wasps than from anyone you were hoping to meet. Keeping your drink covered at all times will save you from being stung on the mouth (and possibly from other things as well).

Don’t try to shoo away yellowjackets, because this can provoke them. When one lands on you, chances are it’ll move on shortly, but if you can’t wait, flick it rather than swat it. Once a wasp stings it releases an alarm pheromone that signals others to sting too, so take cover if you do get stung.

Traps are available online and at hardware stores, but simple and effective ones can be made by carving an “X” on three quadrants of a plastic bottle (leave one quadrant to pour out old liquid). Put about an inch of sugary pop (orange works well) along with 2 drops of dish detergent in the bottom. Replace the cap, and set these outside the perimeter of your gathering, preferably a few hours before the event begins. For more information, see the New York State Integrated Pest Management page on wasp control.

And take heart – wasps all die with the onset of freezing weather. All except next year’s authoritarians …