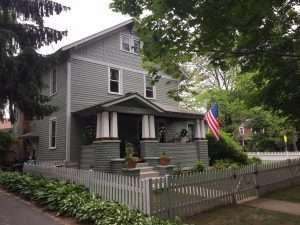 The Saratoga Springs Preservation Foundation has announced their scheduled autumn events, including Sunday Strolls, bike tours, and more, set to begin on Sunday, September 12th and run through October 24th.

The series will begin on Sunday, September 12th at 10:30 am with Historic Fifth & Madison with Debbie Studwell. Attendees will take a tour of these grand residential streets adjacent to the Saratoga Race Course which are lined with elegant Queen Anne and Craftsman houses. Tour meets at NE Corner of Fifth & Nelson avenues.

On the following Sunday, September 19th, Charlie Kuenzel will explore the historic landscape architecture of Congress Park, share about the history of Saratoga and its springs, and highlight the Canfield Casino. Historic Congress Park tour meets in Congress Park in front of the Canfield Casino at 10:30 am. Additional Autumn Strolls include tours of mail-order houses of the east side on October 3rd, the return of Pups for Preservation on October 17th where dogs and their humans stroll North Broadway, and the Gut neighborhood on October 24th.

All Sunday morning tours last approximately 90 minutes and require walking and standing on varied terrain. Tours will be limited to 30 people and tickets must be purchased in advance. The cost per tour is $15 for SSPF members and $20 for non-members.

In addition to the Autumn Strolls, the Foundation will be offering bike tours of the Saratoga Spa State Park on Sunday, September 26th and Saturday, October 9th. Bike tours last approximately three hours, attendees must bring or rent their bike, and space is limited. The Foundation is also hosting its Twilight Cemetery Tour “Madness, Murder, Untimely Deaths, and Strange Coincidences,” on Thursday, October 21st at 5 pm which provides an opportunity to explore Greenridge Cemetery at dusk with tour leader Gloria May. Tickets for the Bike Tours and the Twilight Cemetery Tour are $20 for SSPF Members and $25 for non-members.

For additional information or to purchase tickets to any of these upcoming tours visit the Saratoga Springs Preservation Foundation website, call (518) 587-5030, or email Nicole Babie, Membership & Programs Director, at nbabie@saratogapreservation.org.