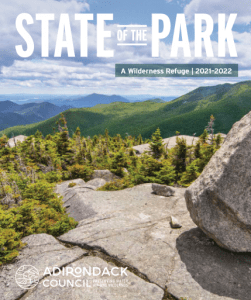 The remote, peaceful and serene wilderness areas of the Adirondack Park have become a place of refuge for millions of New Yorkers and others seeking a respite from the troubles of a rapidly changing world, according to the Adirondack Council’s annual State of the Park report.

“The main thrust of the report is that the Adirondacks have become a Wilderness of Refuge for the entire Northeast during a time of great change and turmoil,” Adirondack Council Executive Director Willie Janeway said in announcement of the latest report.  “Life is different here because people take it upon themselves to live in harmony with nature in its wildest and most untamed forms. Those who seek isolation from the crowds of urban life can surely find it. Those who seek the comfort of a tight-knit, rural community – where everyone knows everyone – can find that as well. Yet nature remains the dominant force.

“As soon as you get here, you can tell you are in a place that is different from the rest of the world,” Janeway said. “For that, we owe a debt of gratitude to the generations that preceded us, who created and cared for this park before we were born. We also owe them our commitment to keep it that way. For that, we need world-class management and the resources to protect and preserve what is special about this wilderness park.”

At six million acres (9,300 sq. mi.) the Adirondack Park is the largest park in the contiguous United States. Yellowstone, Yosemite, Grand Canyon and Glacier national parks combined would all fit inside the Adirondack Park. It is also the world’s largest, intact temperate deciduous forest and home to 87 rare, threatened and endangered species, most of the old growth forest – and 90 percent of the motor-free wilderness – remaining in the Northeast.

State of the Park is a 28-page illustrated report on the actions of local, state and federal officials that helped or harmed the Adirondack Park over the past 12 months. The report is broken into nearly 100 topic summaries for which officials are granted a thumb up or a thumb down.

State of the Park also includes a Report Card on whether officials accomplished the major priorities of the previous years, and a Spotlight section calling attention to the good deeds of individuals and other not-for-profit organizations.

Overall, many of the priorities the Council laid out in its 2020 State of the Park were at least partially achieved over the past 12 months, Janeway said:

“Our top priorities were preserving wilderness; new conservation funding; combating acid rain and climate change; stopping the spread of invasive species; helping local communities build their economies; expanding diversity, equity, inclusion and justice among visitors and residents; gaining reforms of the state’s environmental agencies; and defending the NYS Constitution’s guarantee of a ‘forever wild’ Adirondack Forest Preserve. Some of the gains should be labeled as prospective, since they are plans that still need to be carried out.”

New Conservation Funding: Thumb Up – The state reauthorized a $3-billion Clean Water, Jobs Bond Act for the 2022 ballot, for water, climate, overuse, and the Adirondacks. The Environmental Protection Fund appropriation was a full $300 million. A new $500 million was set aside for clean water.

Approve Environmental Agency Reforms: Thumb Down – The state failed to increase funding, staffing, and oversight of the Department of Environmental Conservation or take action to strengthen the Adirondack Park Agency with updated planning and conservation tools to better incentivize private stewardship and responsible development.

Governor: Former Gov. Andrew Cuomo, who resigned in August following a series of investigations into his personal and official conduct, received thumbs up for his approval of funding for clean water projects and support for a road salt task force, the Adirondack Diversity Initiative, a rail/trail project and affordable internet service. He received thumbs down for failing to appoint anyone to the road salt task force, lack of progress on broadband development inside the Park, lack of progress on cell phone coverage expansion Upstate, a leadership vacuum at the Adirondack Park Agency, lack of support for key economic development promises in North Hudson, violating the ‘forever wild’ clause of the NYS Constitution and failing to support key environmental agencies. The report notes that Gov. Kathy Hochul vowed to end what she called a culture of fear and intimidation in state government. Hochul has been attentive to Adirondack issues, frequently visiting the Park and participating in local events and celebrations. She addressed the Council’s members in July at the Forever Wild Day Celebration, thanking them for helping to protect “God’s favorite place on Earth.”

Both houses won praise for approval of bills to require boat inspections that can stop the spread of invasive species from water to water; passing the Environmental Rights Amendment to the NYS Constitution (on the ballot Nov. 2, 2021); approving a $3-billion environmental bond act, to be on the Nov. 2022 ballot); and, for passing bills to ease broadband service expansion in park communities. Both houses received a thumb down for missing the opportunity to support an important scientific effort and provide protection to the Adirondack Park’s waters when it failed to budget funding for a comprehensive survey of climate change and acid rain impacts on Adirondack lakes and rivers. The Senate and Assembly both scored approvals for efforts to improve environmental funding in the budget; and the Assembly received a thumb down for failing to pass a bill that would have offered better protection to wetlands statewide.

Atty. Gen. Leticia James won thumbs up for her lawsuit overturning the Trump administration’s Affordable Clean Energy Rule; for pressing the federal government to declare the Tahawus Railroad to be abandoned by its prior operator so local and state officials can decide its best use; for seeking and reporting the truth in her investigation of the Governor’s conduct; and for securing funding for clean air research via court actions.

The DEC received thumbs up for working with the Adirondack Mountain Reserve to pioneer a parking reservation system that can help officials control damage to overused areas of the Reserve and the High Peaks Wilderness Area; releasing its force that report recommend actions to give the High Peaks relief from overcrowding; working to promote Leave No Trace outdoor ethics; entering an agreement with Cornell University to help control the spread of all invasive species; for slating a rangers-only academy for 2022 to replace those who have retired; finding previously undiscovered PFAS contamination in a local water supply; prosecuting a moose poacher; helping state agencies cut their carbon output, among other things. The DEC earned thumbs down for not supporting passage of legislation requiring boat inspections inside the Adirondack Park; for trying to build an unconstitutionally destructive snowmobile trail network on the Adirondack Forest Preserve; and for an incomplete plan to manage the non-conforming structures on the former Debar Park estate.

The APA won thumbs up for drafting a visitor management plan that could become an official framework for managing overcrowding; approving a well-screen cell tower project; for board member John Ernst’s statement on the importance of controlling shoreline development; and for approving solar power development in appropriate locations. It received thumbs down for approving two poorly screened cell tower installations; for approving a subdivision plan it had previously earned praise for rejecting; and failing to protect one important wetland from a marina expansion and another from shoreline development.

President Joe Biden received thumbs up for his reversal of Trump era policy changes that weakened pollution air controls and public health standards; for appointing EPA Admin. Michael Regan and White House Climate Advisor Gina McCarthy; approving the Great American Outdoors Act and other measures to improve funding for acid rain and climate research. The Army received a thumb up for improving its training planning inside the park, while some Air National Guard units received a thumb down for extreme noise in unsuitable locations, despite discussions promising compliance with agreements to respect homes, communities and wilderness. Maine Congressional Rep. Chellie Pingree received a thumb up for acid rain research money and policy support; but local Rep. Elise Stefanik received a thumb down for maintaining that Joe Biden’s win in the 2020 Presidential election shouldn’t have been certified by Congress, even after the January 6 insurrection that killed both police and protestors. Federal officials won praise for environmental justice initiatives and for funding to improve broadband service.

In the centerspread of State of the Park is an introduction to the Forever Adirondacks Campaign, directed by renowned national wilderness advocate Aaron Mair. Aaron joined the Adirondack Council in May 2021. Mair will work to bring national attention and federal funding to the protection of Adirondack Park wilderness and clean water, while creating new jobs managing protected landscapes and visitors, as well as pathways for people of color to gain the skills and credentials needed to hold those jobs.

State of the Park also includes sections on the actions of other state agencies, s “Spotlight” section praising the work of other organizations and individuals, and an awards page listing those who have won special praise from the organization and why. Finally, the last page of the report sets forth the organization’s priorities for 2022.

Janeway said that the Adirondack Council’s State of the Park Report was the most detailed and comprehensive report on any park in the United States.

“Our world-class park deserves world-class oversight and management,” said Janeway. “The Adirondack Council interacts with public officials on every level of government, from the park’s nine village boards to Congress and the White House. Most importantly, we are non-partisan. We give credit and find fault with the actions of Republicans and Democrats alike.

“Our freedom to publish a frank and unvarnished critique of the actions of public officials is due to the support we receive from private citizens inside the Park, in New York, across the United States and around the world,” he said. “We rely upon private support to maintain an independent voice for the ecological integrity and wild character of the Adirondack Park.”

The full 2020 State of the Park Report is available online.