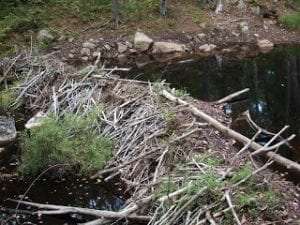 As more frequent rain begins to replace the prolonged dry periods of early to mid summer, water levels in streams and rivers slowly start to rise from their early August lows.

Yet, back country paddlers that are hoping to encounter fewer surface rocks and other obstacles that become present during times of low water are likely to be confronted with a new navigational hazard – beaver dams.

During the latter part of August, the awakening urge in the beaver to erect a series of dams, and to repair and heighten any stick and mud barrier that already exists in various waterways, can cause frustration to anyone hoping to encounter an unobstructed flow of water.

From the time that the leaves emerge on our deciduous trees in spring, the beaver seldom engages in any of the activities for which it is so well known. Older adults often use the summer to more thoroughly investigate areas both upstream and downstream from the site where they spent the previous winter. Young adults that abandon their family’s territory in mid-April often spend the summer exploring any and all waterways dozens of miles from their former home.

As mid-August arrives, all beavers gradually settle in an area that they have selected to pass this coming winter, and the first order of business is to begin work on a dam. This process starts with the beaver cutting several alder branches, or the limbs from other readily available shrubs, and securely anchoring them to the bottom. With the butt of the severed branch pointing downstream, the twigs that are covered with leaves lie against the flow of the oncoming water. Additional branches are added to help support this initial framework and some stones and other heavy items are placed on this developing mass to keep everything from washing away.

It takes only a few nights for a basic dam to be set in place, and as debris carried by the current collects against the surface of the dam, it becomes thicker and more solid. Eventually, the beaver pushes sediment from the upstream side into this collection of sticks and twigs in order to more permanently solidify the dam and make its surface more water tight. As more sticks are placed parallel to the direction of water flow, the height of the dam increases, and the water level behind this structure starts to rise.

Places where the streambed narrows are preferred dam sites; these locations require a shorter structure compared to those stretches of stream where the water spans a much greater distance. While a narrow area of water translates into a swifter current, the effectiveness of the beaver’s handiwork is usually adequate to deal with the force of the water that exists at this time of year. Since stream levels are typically at their yearly minimum, the force of the current becomes manageable, even in narrow spots, during this late summer period.

This is why a beaver frequently selects a culvert that keeps water channeled away from a highway, or a bridge beneath a road as a site for a dam. These locations require only a minimal amount of effort to block during the late summer and early autumn, yet, once the rainy season starts in the cooler months, such plugged waterways can produce sizeable bodies of backed-up water which are most useful to this semi-aquatic rodent.

As the water level rises, the beaver is often forced to expand the length of its dam onto the surrounding shoreline, causing a structure that may only be 20 feet long at the start to grow into one that is over a hundred feet by the end of autumn. If the beaver is able to access a sizeable stand of preferred trees with the creation of the resulting shallow pond, this mammal will continuously add to the length and height of the dam. In some instances, a dam may be maintained for many years where a family of beavers has been successful in locating food.

When a beaver dam causes a section of a hiking trail along a stream to be completely flooded, or when the repeated efforts of this mammal to create a pond across a town road, such structures are not viewed too kindly by the general public. While this year’s dams may not yet be noticed by most people, those canoeist and kayakers that venture onto water routes that are generally avoided by paddlers with any common sense will be the first to note that the beaver is returning to a more active existence and starting its preparations for the coming season.