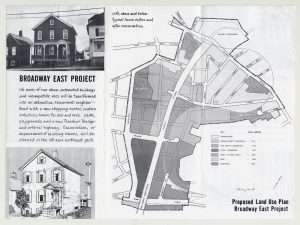 The program’s goal was to provide local leaders with funds to demolish “blighted” areas and thereby to clear large tracts of land for redevelopment. Among the casualties were over 330,000 households, at least 90 square miles of urban cores, countless communities, and much of the nation’s architectural heritage.

The State of New York received more federal spending than any other state (about 1/8 of total federal spending). It also ranked second in the number of municipalities affected (101, including State Urban Development Corporation projects).

David Hochfelder, historian at University at Albany, SUNY, is creating a statewide inventory of urban renewal records held locally. This project is funded by the National Endowment for the Humanities. The Archives Partnership Trust serves as the project’s fiscal agent. The goal of this project is to acquaint public historians and audiences with the local resources necessary to understand the history of urban renewal across the state.

Hochfelder is seeking guidance in locating these local records. He can be reached at dhochfelder@albany.edu.