The Seneca Lake Archaeological and Bathymetric Survey Project is an underwater exploration occurring on Seneca Lake that aims to preserve the history of New York’s canals by using state-of-the-art equipment to capture never-before-seen images of intact canal shipwrecks from the early nineteenth century in the deepest waters of the lake.

The discoveries made during this underwater survey are expected to enhance future curriculum and educational material for students learning about the Erie Canal and the state’s canal system. In addition, the bathymetric survey will map the underwater terrain while collecting information on water quality and Seneca Lake’s ecosystem.

Launching from the marina at Sampson State Park, the research team is working in Seneca Lake this summer with newly acquired deep-water Remote Operated Vehicle technology, to capture high-resolution imaging of the intact canal boat shipwrecks in the deepest regions of the lake. Earlier expeditions in 2018 and 2019, previously uncovered the remains of up to 16 canal boats from the early nineteenth century — including what is believed to be the first-ever identified intact remains of a canal packet boat dating back to the early 1800s. 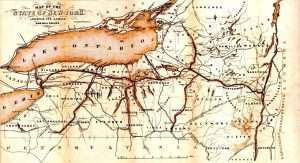 Packet boats were the marvel of their age as they moved travelers east and west along the new Erie Canal route across New York State between the Hudson River and the Great Lakes. Even before the Erie Canal was completed in 1825, these passenger carrying packet boats began operating on the newly completed sections of the canal. Packet boats provided a smooth and speedy alternative to the stagecoaches operating on the often-rough road systems.

Typically towed by three horses in a line, the packet boats had right-of-way for locking through, provided comfortable, long-distance transportation with on-board lodging, meals and even had sleeping arrangements. They were an instant success, extending travel to every community served by the new Erie Canal and the adjoining smaller canals.

Packet boats revolutionized travel until the new railroads began to offer passenger service along many of the same routes. Most packet boats disappeared before the age of photography and most of what is known of their design comes from paintings and other illustrations from their time.

The Canal Corporation, in partnership with the Erie Canalway National Heritage Corridor, envisions the development of a series of educational resources for New York State teachers and students in grades 6-12 to supplement the Seneca Lake Archaeological and Bathymetric Survey Project. The Erie Canalway National Heritage Corridor team is planning to work with teachers from school districts throughout the Finger Lakes Region to develop lesson plans which will be easily adaptable for classroom use.

The research group’s discoveries come at the same time of the ongoing State-supported replica construction of the Seneca Chief, Governor DeWitt Clinton’s 1825 Canal packet boat, at Buffalo’s Canalside Longshed Building, as well as the recent announcement by the United States Mint of a new $1 American Innovation Coin from New York featuring a packet boat navigating on the historic Erie Canal. The coin will be available for public purchase from the U.S. Mint this summer.

The Seneca Lake Archaeological and Bathymetric Survey Project is occurring under permit through the New York State Museum, and all the remains and artifacts of the vessels discovered are the property of the State of New York.

Video of underwater research can be found online.