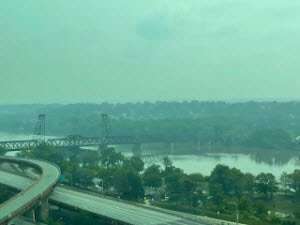 Most of the smoke likely originated from fires in Canada, just north of Minnesota, then was carried southeast through the Great Lakes by northwesterly winds.

The smoky skies created hazy conditions that captured the attention of people all over the state and reduced visibility to as low as 2.5 miles in some places.

Wildfire smoke traveling far across the country has been somewhat of a common occurrence in recent summers. Smoke from large western fires often blows east, but it typically moves at high altitudes where it goes unnoticed by people on the ground. By the time it reaches NYS, the smoke has had time to disperse and is usually traveling over three miles above our heads.

According to data from NASA however, a significant portion of the smoke in July traveled close to the ground instead. This meant that even though NYS was far from the source, the smoke at ground level was still in high enough concentrations to cause spikes at air monitoring stations across the state. In the NYC Metro Area, these spikes even reached the level of “Unhealthy,” which is when everyone is at risk of experiencing health effects. 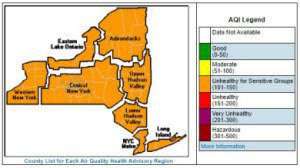 Wildfire smoke contains a wide variety of unhealthy pollutants, including fine particulate matter (PM2.5) and carbon monoxide. At high concentrations, inhaling smoke can reduce lung function, worsen asthma, and even lead to premature death in people with heart or lung disease. High concentrations of these types of pollutants are what recently led DEC to determine the air quality was unhealthy for sensitive groups statewide. People with preexisting conditions, young children, and the elderly were at elevated risk.

While the smoke in July was caused by out-of-state wildfires, fires within NYS cause local air quality issues every year. Although some of these fires occur naturally, according to DECs Forest Rangers, 95% are caused by humans. Before starting any kind of outdoor fire, check the fire danger map for your area and read up on NYS open-burning rules. Also, be sure to check your local AQI forecast every day, so you can be aware of your air.