The arrival of these “Poor Palatines” caused a rise in opposition to immigration in England. Most were quickly sent to Ireland, but nearly 3,000 were sent on 10 ships to the colonial Province of New York (a group about a third the size of the population of the city of New York at that time).

To pay off their passage, many were assigned to work camps on the Hudson River. Known as East Camp and West Camp, these were located on Livingston Manor, at what is today Germantown (in Columbia County) and across the river in what is now Saugerties (Ulster County).  From the work camp settlements some moved on to other now well-known “Palatine” places.*

Those who were the first to leave traveled the long road north from Livingston Manor, where Troy is now they turned northeast on the “Hosek Road” (Hoosick Road, now Route 7), the only public highway across the Rensselaerwyck Manor at that time.  The road linked the Albany area with communities settled on the Hoosac Patent, which had been granted in 1688 at what is now the northeast corner of Rensselaer County. 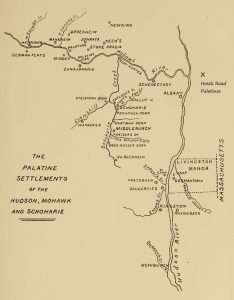 In 1711 there was an expedition against French Quebec (the Walker Expedition). The attack was part of the spread of the European war to North America and is known locally as Queen Anne’s War (1702-1713).  Some Palatines at Livingston Manor who had served in this expedition (under compulsion) were among those who settled their families afterward near the north line of the East Manor of Rensselaerwyck, at what is now the north line of the town of Brunswick, and the towns of Schagticoke and Pittstown.

A 1714 census of the Manor of Rensselaerwyck reported a total population 427, including 181 enslaved people. Among the first recorded Palatines there were the names Jung, Freiderich, Shaffer [Schaffer], Kelmer [Kolmer], Froelich, Bergman, Schmidt [Smith], and Schneider [Snyder], Ham, and Witbeck.

After another expedition against New France in 1724 more joined them from Livingston Manor, including Keener, Dirk, Phillips, Lamp-Man, Conrad [Cooradt], and others. Johannes Hayner and Ulrich and Philip Barnett settled at what became the hamlet of Haynersville. Shortly thereafter, a meetinghouse was constructed nearby, along with the Gilead Lutheran Church (the church today is a later building). In the 1740s, the congregations were ministered to by Rev. Peter Nicholas Somnier, who was also the pastor of the churches to the west, almost surely in German, as his successors would into the mid-19th century.

During the North American campaigns of the War of the Austrian Succession (1740-1748), known locally as King George’s War (1744-1748), the French and their Indigenous allies made several raids to the colonial frontier between Albany and Lake George. On November 28, 1745 the village of Old Saratoga (Schuylerville) was sacked and burnt, with more than 100 people killed or captured. In 1746 they raided the Hoosac River valley, including an attack on Fort Massachusetts (now North Adams, MA); and in 1748 attacked Schenectady. Historians report that the raid on the Hoosac resulted in many Palatine families fleeing back to Livingston Manor.  Many Palatine families also fled during the French and Indian War (1754-1763, part of the Seven Years War in Europe, 1756-1763). 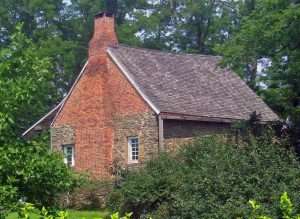 When the war ended, more emigrants – Germans, Dutch, English, Scotch, Irish and French – settled the area as well. Some Palatines settled at what is now Petersburgh where they built a log church which still stood as an old schoolhouse in 1800. In the 1760s, the regular pastor was ”Schole Master Watson,” a lay preacher.

* The name Palatine is a bit of a misnomer, as they weren’t all from the Palatinate; they also were not all Protestant, some were Catholic. In 1723, they also acquired land west of Little Falls and then began settling along the Mohawk River including at what is now Palatine, Palatine Bridge, and into the Schoharie Valley.

Illustrations: An account and depiction of the Palatine refugees’ sufferings in Germany from “The State of the Palatines for fifty years past to this present time…” (London, 1710) courtesy the British Library; Map of Palatine settlements showing Hoosick Road Palatines near Brunswick Rensselaer County NY (original map from The Story of the Palatines: An Episode in Colonial History by Sanford Hoadley Cobb, 1897; and Stone Jug house in Clermont, NY, built by Palatine tenant farmer Konradt Lasher in the mid-1700s (photo by Wikimedia user Daniel Case).