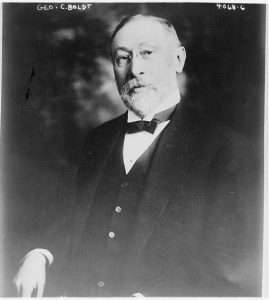 The Margaret Reaney Memorial Library is a fixture in the Erie Canal-side community of St. Johnsville, Montgomery County, NY. The Library contains a museum which features a wide array of art in a very fine collection.

An outdoor sculpture display in the north garden is listed in the Library’s catalog as “Nude Female and Lion” by Roland Hinton Perry. The bronze was cast in 1898 by Jno. Williams, Inc. foundry which was located on West 26th Street in Manhattan. 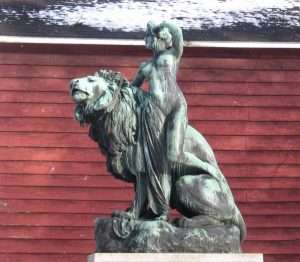 With this sculpture, many feel that Roland Hinton Perry captures the essence of Aesop’s fable, “The Lion in Love.” The theme of the tale is a mighty lion that falls hopelessly in love with the enchanting maiden that maintains his nails, and seeks the permission of her parents for the girl’s hand in marriage. The mother and father, in agonized reply, tell the ferocious beast that they fear for their daughter’s future well-being, and can only consent if the lion agrees to remove his teeth and claws.

The lion, in a determination fed by his intense feelings for the maiden, goes through with the parent’s stipulation. Unfortunately, when he arrives to claim his betrothed, the parents laugh at the now powerless beast, and mockingly urge him to do his worst.

Perry’s depiction of the lion in bronze shows him without claws or teeth. Other motivational interpretations conjecture that sculptor Perry made a representation of Edmund Spenser’s legend of “Una and the Lion” found in the collection of poems, The Faery Queen, from 1500s England, with this work.

The “Lion in Love” sculpture was commissioned by the man who helped invent hotel hospitality, George C. Boldt, and his wife and management partner Louise Kehrer Boldt. The Boldts, before they began construction of their landmark castle on Heart Island in the St. Lawrence River’s Thousand Islands region, introduced many hotel amenities such a room service, special salads and dressings, roof top gardens, and the velvet rope at the original Waldorf-Astoria Hotel in New York City. They became known as the “hosts to the world” and pioneered the use of mononymous celebrity, in the person of Oscar at the Waldorf, the maître d’ hôtel at their restaurant. 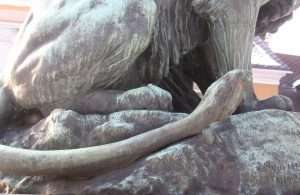 The Waldorf portion of the hotel opened in 1893 at the corner of Fifth Avenue and 33rd Street, in what had previously been a mostly residential neighborhood.

The Astoria portion opened next door on the west side of Fifth Avenue in 1897, and the segment between the two separate structures was connected by an enclosed garden area that contained novel opulent features.

This location became the fashionable spot in Gotham to see and be seen, and as such became known as Peacock Alley, epitomizing the Gilded Age. The Boldts installed the “Lion in Love” sculpture on Manhattan’s stylish new Main Street, and the Waldorf-Astoria Hotel’s reputation manifested into global renown.

Louise Boldt died unexpectedly in 1904, causing her husband George to halt construction on their castle in Alexandria Bay due to heartbreak, and left it uncompleted for decades. George Boldt passed away in 1916, and his successors managed the Waldorf-Astoria Hotel in the elevated manner the original proprietors established.

The decision was made to relocate the Waldorf-Astoria and the lavish landmark hotel was demolished in 1929, in order to clear the site for the present day Empire State Building. All contents of the hotel went to dispersal by an extended auction that occurred in the building for more than a month. One of the vendue sale items was the “Lion in Love” sculpture, which moved from Peacock Alley to St. Johnsville.

Photos, from above: George C. Boldt courtesy Library of Congress; Lion In Love by Roland Hinton Perry at the Margaret Reany Library; and Lion In Love displaying declawed paws and artist’s signature.