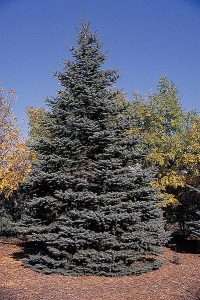 When I’m asked to diagnose tree problems, folks naturally want the remedy. Sometimes the only solution is tree removal; other times it’s a cable brace, pest management, corrective pruning or fertilizing. But increasingly, the diagnosis is climate change. If anyone knows how to solve that through an arboricultural practice, please let me know.

With rising temperatures, a novel weather pattern has taken hold with longer and more intense dry and wet periods. In 2012 many areas had the lowest soil moisture ever recorded. Nonstop rain in 2013 led to flooding and farm disaster relief. A drought in 2016 set more records in some places, and catastrophic flooding hit in 2017. Drought followed in 2018, and 2019 was another massive flood year. Prolonged dry spells cause root dieback, weakening trees for several years afterward. But unusually wet seasons are just as bad for trees.

About twenty years ago I noticed a rise in the incidence of a spruce ailment called Rhizosphaera needlecast, arborist-speak for “spruce needles turn brown and fall off.” This native fungal pathogen was always considered weak and opportunistic. Historically, it only showed up when spruces (and rarely other conifers) had been planted too densely, allowing the needles to remain wet long enough for this wimpy microbe to enter foliar cells. The answer was to thin out the trees to make space between them so air could circulate, and remove spore-infested dead branches. This remedy was kind of like drinking lemon-honey tea and getting lots of rest until your cold clears up – simple, but it usually worked. I was curious as to why Colorado “blue” spruce (Picea pungens) was much harder-hit than other species.

The reason has to do with its origins: Colorado spruce is adapted to an arid environment. In fact, its foliage is actually green, and the blueish appearance is due to a heavy layer of wax (which you can rub off) that the trees make to retain moisture. So when a pathogen like Rhizosphaera that needs copious moisture for extended periods to become infectious meets a tree designed to hold moisture, an unhappy relationship ensues. To be clear, infected trees can live for many years as they get increasingly disfigured and barren on their way to the end.

With more and more calls coming in about this issue, by 2010 I was advising people to only plant Colorado spruce on open, preferably elevated, sites. But when I began to see needlecast disease in windy, full-sun environments, it was clear a “new normal” had emerged – extended wet periods were allowing pathogens to access trees in open, ideal settings, not just those packed too tightly together.

Cornell’s Plant Pathology Lab was also dealing with higher numbers of samples, and they identified Stigmina needle blight and Cytospora canker, native pathogens that work in concert with or in place of Rhizosphaera to cause needle drop. The rate of disease advancement can potentially be slowed through a series of three fungicide applications each spring. For a mature tree, this is likely in excess of $1000 per year for the remainder of the tree’s life, an expense few can afford.

Around 2017, many Cornell Extension Educators began to advise against planting Colorado spruce, a position I heartily endorse. White spruce (Picea glauca), once deemed moderately resistant to needle disease, is now being severely affected as well. Fortunately, there’s still a contender in the ring: Norway spruce (Picea abies). Every native conifer species, whether hemlock, balsam, white pine or spruce, all face relatively new and very significant threats. As much as I prefer native species, I think it’s important to plant more Norway spruce – we need greater diversity.

I recommend planting a broad range of tree species, but only those which are still appropriate for our climate. To paraphrase some good marriage advice I once got about choosing between happiness and needing to be right, “Do you want to be happy, or do you want a blue spruce?” Let’s leave them in Colorado.