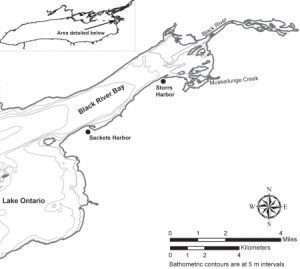 During the War of 1812, the Second Battle of Sackets Harbor forever altered the landscape of Eastern Lake Ontario. Archaeological analysis of artifacts and the battlefield has broadened the shared understanding of the battle and the experiences of those on the ground.

Now, archaeologists are moving offshore to see if remains of the battle can be detected on the lake bed.

An interdisciplinary team of researchers led by NOAA’s Office of National Marine Sanctuaries is conducting autonomous survey and exploration of the offshore Sackets Harbor Battlefield in Eastern Lake Ontario from August 10th through the 20th. The project team will be at the Sackets Harbor Battlefield State Historic Site on Saturday, August 14th from 1 to 4 pm conducting technology demonstrations, answering questions, and discussing the survey.

The aim of the survey is to characterize the lake bed in hopes of identifying submerged remains of the battle. The survey is being conducted using autonomous aerial, surface, and submerged vehicles outfitted with remote sensing instruments.

This program will be held at the historic site’s red barn off Hill Street, between Edmund and West Washington Streets.