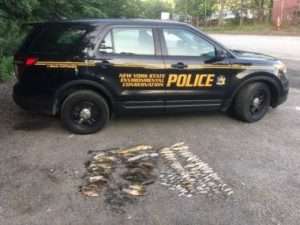 New York State Environmental Conservation Officer DEC Franz reported that on July 19th, they responded to a call regarding individuals using a gill net to catch fish in the town of Cortlandt, Westchester County.

Franz said he approached the anglers and observed several cast nets on shore and a gill net approximately 100 feet long installed in the water nearby. When questioned, the fishermen showed ECO Franz coolers full of more than 100 species of fish including: carp, white perch, menhaden, porgy, sunfish, and catfish. ECO Franz seized the fish and issued citations to the fishermen.

On August 1st, ECOs Dickson and DeRose responded to a complaint about people illegally taking fish with a cast net at Captree State Park, in Suffolk County. The officers responded, found the anglers with the net, and went through their catch.

They found more than 30 snappers, sea bass, weakfish, and striped bass that were taken using the net. The ECOs issued a total of seven tickets to the anglers for the violations. From there, the officers issued at least six more tickets to two different groups who were also taking fish illegally. All tickets are returnable to Suffolk First District Court.