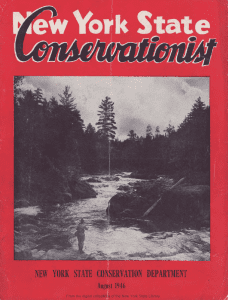 With six issues published each year, there have been a total of 450 issues of Conservationist magazine since its inception. Visit the DEC website to check out the magazine’s evolution since its launch in 1946.

Today’s Conservationist remains committed to providing readers with information about New York’s outdoor opportunities, such as hunting, fishing, and hiking. It also focuses on the work of DEC’s Divisions of Forest Protection (Forest Rangers) and Law Enforcement (Environmental Conservation Police Officers), extremely popular topics with readers. Over the last few decades, the magazine has increased its focus on environmental challenges such as air quality, solid waste, harmful algal blooms, and greenhouse gas emissions.

In addition, DEC publishes Conservationist for Kids (C4K), specifically designed for children to highlight ways they can enjoy, explore, and learn more about the outdoors. DEC has published 39 issues of C4K since its debut in 2007.

Each year, an estimated 280,000 copies of C4K are distributed to fourth-grade classrooms across New York State free of charge, as well as DEC environmental education centers, regional offices, and fish hatcheries, and State Parks’ nature centers and other facilities. Recent C4K issues have featured stories about amphibians and reptiles, outdoor safety, and cleaner vehicles.

To encourage new subscribers and in celebration of the 75th anniversary of the magazine, DEC is offering a special $2 subscription rate for both in-person and online subscribers, including gift subscriptions, to the Conservationist during the Great New York State Fair, August 20th through September 6th, 2021. This special rate will be limited to 7,500 online and in person subscribers.

In addition, in 2021, a law was enacted authorizing DEC to continue to hold sweepstakes and contests intended to stabilize, improve, or otherwise increase the subscriber base of the Conservationist magazine. Visitors to the Conservationist booth at the upcoming New York State Fair can enter a raffle, at no cost, to win a prize valued at $500.