In England, Vauxhall Gardens at Kennington once stood on the Surrey side of the Thames, a short distance east of Vauxhall Bridge, and was a popular place of public resort from the reign of Charles II to the end of the nineteenth century. In the early 1730s, Vauxhall was transformed into a fashionable favorite when Jonathan Tylers assumed the management of the Gardens. He introduced supper boxes decorated with paintings and statues. Vocal music was introduced in 1745, with some of the greatest singers of the day performing at the Gardens. In 1749 a rehearsal of Handel’s Music for the Royal Fireworks attracted an audience of 12,000.

London set an example to Manhattan. New York’s Vauxhall Gardens were opened in 1767 on Greenwich Street by the Hudson River. Vauxhall was later relocated between Broadway and the Bowery (practically countryside at the time).

In 1825, William Niblo transformed a square block on Broadway into a pleasure garden lit by hanging lanterns. Later renovations included a theater where in April 1850 he presented America’s premiere of Giuseppe Verdi’s Macbeth with the legendary Italian operatic soprano Angiolina Bosio as Lady Macbeth.

Theatrical historians have pointed to Niblo’s Garden as the birthplace of the modern musical. 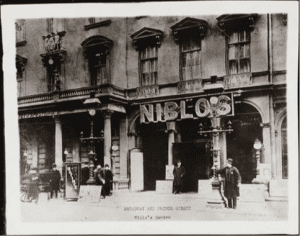 Irish immigrant William [Billy] Niblo started his career behind the bar, working for his future father-in-law David King who ran a tavern at 9 Wall Street and later at 6 Sloat [Slote] Lane.

An enterprising character, the young man went his own way in 1812 by opening the Bank Coffee House. Located at the rear of the Bank of New York, it became a center of commerce where private rooms were hired out for business meetings and social gatherings. The house prospered and was the scene of many sumptuous banquets. Green turtle was a specialty of the house.

In 1823 William changed his career. Having acquired the estate of the New York lawyer and race horse breeder Charles Henry Hall, he turned the grounds into a pleasure park and converted the stables into a saloon. The Garden occupied almost the entire block between Broadway and Crosby Street.

Once a theater was added to the premises, Niblo took on the role of impresario. He offered a wide repertoire of performances, from sacred music to orchestral productions or trumpet competitions; from acrobatic acts to popular drama.

The attractions at Niblo’s included blind Joice Heth, an elderly enslaved woman who was exhibited with the claim that she was 161 years old and had nursed the infant George Washington. After making a few appearances with promoters in Kentucky and Philadelphia, she was sold to young P.T. Barnum in August 1835. It was his first venture into “show” business.

A fire in 1846 brought proceedings to a temporary halt, but three years later the Garden re-opened bigger and better than before. In 1855, Barnum contracted the tightrope walker Charles Blondin to tour America and appear at the Garden (four years later a massive crowd watched him crossing Niagara Falls on a rope).

By the mid-nineteenth century, Niblo’s was considered New York’s most fashionable theater. In September 1866 the playhouse staged The Black Crook. Written by Charles Barras, the historical melodrama included many special effects. The scantily-clad French dancers in skin-colored tights were a big draw too. The show ran for a record-breaking 474 performances and then toured extensively.

It came to an end when young Emperor Franz Joseph appealed to Tsar Nicolas I for assistance.

Fearing unrest in his own backyard, Nicholas agreed. The Magyar idealists were no match for the might of the Russian army and were crushed in August 1849.

Four years previously, Imre Königsbaum had been born in Budapest to a thriving Jewish clothing manufacturer and his wife. Encouraged by his parents, young Imre showed a talent for dancing. At the age of four he was already appearing on stage. His father’s participation in the Revolution ruined the business and forced the family to flee.

They settled in Berlin first, before moving to Paris. Having adopted the stage name Kiralfy, Imre and his younger brother Bolossy started touring Europe as Hungarian folk dancers with other members of the family. In May 1869 they traveled to New York and were eventually contracted to perform at Niblo’s Garden. 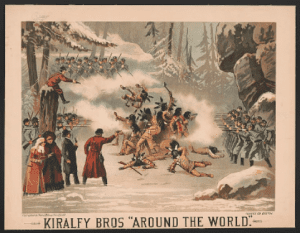 Their first foray as producers came in 1871 with the pantomime Humpty Dumpty at the Olympic Theatre, Broadway. They went on to produce extravagant stage shows with large chorus lines, elaborate costumes, and special effects. Their list of productions included the 1877 breath-taking Jules Verne adaptation of Around the World in Eighty Days.

In August 1873, the brothers first produced their own musical spectacle, reviving The Black Crook at Niblo’s Garden. It turned out to be an immense success. The Jewish partnership of Imre & Borossy Kiralfy introduced the concept of musical extravaganza to New York. Historians consider their version of The Black Crook a prototype of the modern musical as song and dance are organically interspersed throughout a unifying story line.

In Judaism, the interaction of language and music has theological significance. Melody and chant are integral parts of worship. There are specific tunes for morning, afternoon, and evening prayers. The Torah is not read during service – it is sung. This central place of linguistic musicality in Jewish culture continued even as Yiddish supplanted Hebrew over time.

Yiddish is a Germanic language with a strong Hebrew-Aramaic component and a vocabulary deriving from Slavic tongues. The exodus of East European Jews to New York put Yiddish in the spotlight. Verbal mastery led to a wealth of (political) journalism; the emergence of a distinct theater tradition; and the molding of wordsmiths. David Daniel Kaminsky (Danny Kay: of Ukrainian descent) and Melvin Kaminsky (Mel Brooks: of Polish-Russian descent) would be their legatees.

Modern Yiddish literature developed in the nineteenth century. Newspapers served as vehicles of social emancipation by publishing serialized novels, sketches and essays. The process of Jewish acculturation in New York was carried out through the institutions of the Yiddish language. From the 1880s New York’s Yiddish theater offered its audience an outlet to highlight and discuss the various challenges facing an immigrant population.

At the same time, most newcomers saw little sense in preserving the autonomy of Yiddish and were committed to adapt English in their determination to integrate. The stage played a crucial role in that process, while also providing the metropolis with some of its finest actors, playwrights, scenic artists, and comedians. ​ 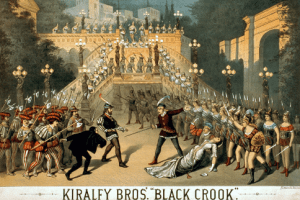 In Romania, composer Abraham Goldfaden had begun turning popular Yiddish songs into musical plays by connecting them with story lines. They proved a big success and he proceeded by adapting familiar Jewish narratives into lavish operettas. His work became the model for New York’s nascent Yiddish theater, beginning in the Bowery in the early 1880s, and later flourishing on Manhattan’s Second Avenue, the “Yiddish Broadway.”

The Kiralfy brothers beat all competitors with their flair for spectacles, producing musical performances with a huge cast of singers and dancers, against a background of superb decors painted by professional artists, and accompanied by sensational accessories and special effects.

Jewish settlers were instrumental in the development of theatrical entertainment. In the early twentieth century the traditions of New York’s vibrant Yiddish theater district first rivaled and then fed into Broadway. There would be no American musical without immigrant Jews.

Illustrations, from above: Vauxhall Gardens at Broome Street, its second location (1803); Niblo’s Garden, c. 1887; Around the World, 1882. (Library of Congress); Program from original production; Poster of the 1873 revival of the musical.