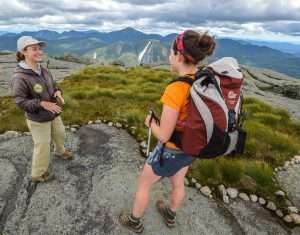 Hikers climbing the Northeast’s highest peaks will traverse several different vegetative zones along the way. On the summits, they’ll likely encounter plants so hardy that many also grow in the Arctic, thousands of miles to the north.

Many hikes begin in a northern hardwood forest dominated by beech, yellow birch, and sugar maple. As hikers gain elevation, they’ll notice the evergreen branches of red spruce and the white trunks of paper birch added to the mix of hardwoods. From roughly 2,500 to 2,900 feet in elevation, the forest typically transitions to red spruce and balsam fir. Emerald mosses carpet the ground, and lichens hang from trees and cling to bark. Look for the blue fruits of bluebead lily and the red clusters of bunchberry under the trees.

These higher elevations feature colder temperatures and a shorter growing season than lower terrain. When air masses encounter a mountain range, they rise and cool rapidly, causing water vapor to condense into clouds. Fog is frequent, and precipitation is high. The wetter soils are more acidic and less fertile. Here, conifers have an advantage over most deciduous trees. By retaining their needles in winter, conifers are able to begin photosynthesizing in early spring while still surrounded by snow.

Above 3,500 feet (or higher in some locations), the climate is more severe, and trees cannot grow to full size. Black spruce and balsam fir form a stunted subalpine forest known as krummholz, derived from the German words krumm (crooked) and holz (wood). These dwarf trees grow very slowly in a dense thicket only a few feet tall, bending and twisting into bonsai-like shapes in response to wind-driven ice particles and snow loading. Black spruce may form prostrate mats where branches will develop roots that can grow into new trees. Occasionally, small mountain ash or heart-leaved paper birch mix in with the spruce and fir.

Above treeline is the alpine meadow or tundra – a plant community similar to that found in the Arctic. Alpine tundra is rare in the Northeast, occurring only on the highest peaks of Maine, New Hampshire, Vermont, and New York. According to the Eastern Alpine Guide, by Mike Jones and Liz Willey, the most significant alpine areas are on Mount Washington and other parts of the Presidential Range in New Hampshire and on Mount Katahdin in Maine. Almost two-thirds of the species of alpine flora found on Mount Washington also grow in the Arctic. Mount Mansfield supports Vermont’s largest alpine meadow, and New York’s Adirondacks host smaller patches of alpine tundra (about 85 acres in total).

Lichens and mosses are scattered on bare rock above timberline. These pioneer plants help create soil by collecting dust and nutrients, and the lichens secrete acids that dissolve the rock. Sedges, grasses, rushes, and wildflowers grow in depressions and pockets of soil among the rocks. 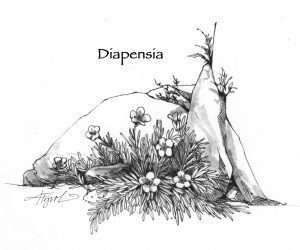 Alpine plants have special adaptations that enable them to thrive in the harsh mountain climate. Many, such as the white-flowered diapensia, form low, dense cushions or mats that protect the inner portion from the wind. Cushions also collect soil, retain moisture, and stay several degrees warmer than the surrounding air. The waxy leaves of diapensia and the wooly leaves of Labrador tea minimize water loss and increase frost tolerance. Most alpine plants are perennials, developing flower buds by summer’s end and storing excess carbohydrates in their roots so they can bloom as soon as conditions permit the following spring. Many alpine plants reproduce primarily through rhizomes (runners) avoiding the challenges of seedling establishment.

These alpine plant communities are relics of the Pleistocene Epoch. When glaciers melted in our region about 13,000 years ago, these were the first plants to colonize the rocky soil. As the climate warmed, conifers and then deciduous trees migrated to the lowlands. Eventually the extreme conditions of mountain summits were the only places in the Northeast where arctic plants could out-compete other species.

Many alpine plants are on state threatened and endangered species lists. Mount Mansfield, for example, hosts 34 rare plant species. Climate change is a major threat to alpine plant communities, affecting such things as the timing of snowmelt and flowering. Studies have shown that trees are moving upslope as the climate warms, potentially reducing the amount of alpine habitat. Vegetation and soil loss from trampling by hikers is another serious threat. Hikers can help protect alpine plants by staying on trails, walking on rock when possible, and keeping their dogs leashed.

Photo: An alpine summit steward in the Adirondacks talks with a hiker; beyond the disappearing alpine environment is supported by rocks to keep soil from washing away.

Susan Shea is a naturalist, writer, and conservationist based in Vermont. Illustration by Adelaide Murphy Tyrol. The Outside Story is assigned and edited by Northern Woodlands magazine and sponsored by the Wellborn Ecology Fund of the New Hampshire Charitable Foundation.