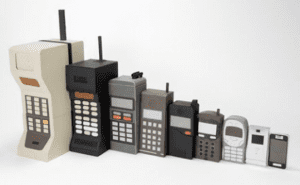 The transition from analog networks, like a landline, to digital networks, like mobile phones, happened in the 1990s. Cellular One was one of the first mobile telephone service providers in the Central New York area.

The Rome Historical Society will host “Local Cellular Networks,” a virtual program on the beginning and evolution of mobile networks in the Utica/Rome area set for Wednesday, August 18th.

Greeley Ford, New York State Liquor Authority Commissioner, graduate of Utica College, and Senior Network Consulting Engineer for AT&T will present on the evolution of local cellular networks. Ford was one of the eight original employees of Cellular One in Utica before it became AT&T. Since starting that job in 1988, Ford has developed an intricate understanding of the cellular networks that connect us all. Join us as Ford shares his knowledge of Mobile Networks and discusses their beginnings in the Utica/Rome area.

This program will begin at 7 pm and will be held on the Rome Historical Society’s Facebook page. For more information, call (315) 336-5870, or visit their website.