An epitaph (from the Greek: “on the gravestone”) is a text that remembers the dead. The earliest known epitaphs were written by ancient Egyptian scholars and inscribed upon individual sarcophagi and stone coffins. The Greeks introduced epitaphs in verse to which the Romans added morbid curses intended to ward off grave robbers.

The nineteenth century was obsessed with these literary curiosities. Countless epigraph anthologies were published that, more often than not, contained mostly doggerel rhymes and poor tomb jokes.

Billy Wilder’s final line: “I’m a writer / but then nobody’s perfect” confirms that the ancient art of writing a fine epitaph has not died in our age of consumer-friendly funerals. History of the genre highlights the shifting awareness of artistic immortality and offers some insight into interpersonal dynamics between author and publisher. 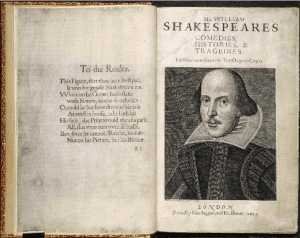 The Ancient Greek word kleos refers to heroic glory after death. The manner to gain that status in afterlife is by displaying bravery in battle. Horace challenged such an exclusive interpretation of the concept and argued that a great poet could claim the same prestige.

In his Odes (XXVI) he described the creative process as a valorous challenge that few dare to undertake and endure its full course. Poetry too is a noble path to being remembered. It holds the promise of perpetuity.

On the publication of Shakespeare’s First Folio in 1623, his friend Ben Jonson wrote a preface in which the line “not of an age, but for all time” appears. As quality is timeless, an author should never be a prisoner of the present. Only then greatness awaits.

The introduction around 1540 of Johannes Gutenberg’s printing press was a revolutionary moment in book history. The early relationship between author and printer was one of collaboration and exchange. In epitaphs, the printer-publisher was often praised as highly as the writer. 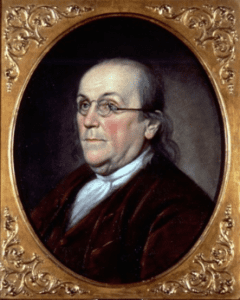 To compare a deceased body to an out-of-print book was a literary ploy that may have been introduced by the controversialist clergyman Benjamin Woodbridge. The first-ever graduate at Harvard College, he wrote some verses inscribed on the Boston tomb of Puritan preacher John Cotton who had died in 1652. He may have been the first to explore the simile:

O, what a monument of glorious worth,
When in a new edition he comes forth,
Without errata may we think he’ll be
In leaves and covers of eternity!

When Franklin died in 1790, he was a celebrated scientist and diplomat. In his will he simply named himself “Benjamin Franklin, Printer.” As a young professional in Philadelphia in about 1728 he composed his own mock epitaph which survives in an autograph manuscript at Yale Library. In doing so, Benjamin may well have been inspired by Woodbridge:

Like the Cover of an old Book,
Its Contents torn out,
And stript of its Lettering and Gilding,
Lies here, Food for Worms.
But the Work shall not be wholly lost:
For it will, as he believ’d, appear once more,
In a new & more perfect Edition,
Corrected and Amended
By the Author.

Over the years, he wrote different versions of his epitaph and passed them out to friends, but the words were not carved on the tomb where his body rests beside his wife’s. The gravestone simply reads: “Benjamin and Deborah Franklin 1790.” 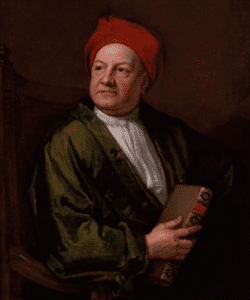 Bookseller Jacob Tonson, the publisher of John Dryden and John Milton, secured a place in history for purchasing the “copyright” of Shakespeare’s plays in 1709. Over the next decades the house published significant editions of the Bard’s works, edited by the likes of Alexander Pope and Samuel Johnson. When Tonson died in 1736, his Latin epitaph was written by an unnamed Eton scholar and published in the Gentleman’s Magazine. The text was accompanied by an English translation:

Here lies a Bookseller,
(The leaves of life having gone to decay)

Waiting for a New Edition,
Much increased and amended.

With an expanding book market, expectations of fame and immortality changed. Duration was no longer a marker of value. Immortality, William Hazlitt wrote in Men and Manners (1825), is “not even a dream – a boy’s conceit; and posthumous fame is no more regarded by the author than by his bookseller.” The book was a marketable product; posterity a pipe dream.

The term “literary property” dates back to legal debates of the 1760s over the extent to which authors and publishers had rights deriving from the common law of physical property. The implied analogy of intellectual and tangible property was not helpful in attempts to clarify the concept.

For considerable time it was common for English literature to be reprinted in America without acknowledgment of or payment to the author. Charles Dickens was the chief victim of literary piracy. Even before the completion of Pickwick Papers unauthorized copies were circulating in America. Within two weeks of the publication of A Christmas Carol, cheap copies were selling on New York’s streets.

In 1842 he visited America for the first time. Having concluded a three week visit to Boston, “Boz” sailed on the packet New York from New Haven to Lower Manhattan, landing on February 12th. He used his warm welcome as an opportunity to seek legal protection for foreign authors. He did not succeed. It was not until 1891 that the United States introduced an International Copyright Act.

It was not a one-way direction. American writers fared no better in Britain where the works of Edgar Allen Poe and Longfellow were pirated. There was an element of snobbery involved. As the United States did not honor the copyrights of (superior) British writers, Britain would not protect those of (inferior) American authors.

In 1846, London-born John Camden Hotten was apprenticed to John Petheram, a bookseller at Chancery Lane. Two years later, he suddenly left for the West Indies and traveled from there to America. He had been accused of running a bookselling scheme using some of his employer’s stock. In self-imposed exile he familiarized himself with American literature.

Hotten was instrumental in introducing American authors to British readers. He pirated works by Mark Twain and Bret Harte, and published editions of Nathaniel Hawthorne and Oliver Wendell. He also tried (unsuccessfully) to issue a collection of Ralph Waldo Emerson’s writings. In 1873, Hotten brought out five hundred copies of an unauthorized edition of Walt Whitman’s Leaves of Grass.

Intriguing questions remain unanswered. Would Charles Dickens have been as celebrated a novelist as he was in the United States without pirated editions? How much did Hotten’s rogue publications deepen British interest in American literature? Pirating was a crooked way of paying respect. 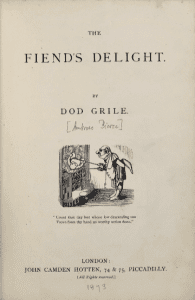 Civil War veteran Ambrose “Bitter” Bierce established his literary reputation as an editor of a number of newspapers and periodicals. Having married Mary Ellen Day in December 1871, they went on honeymoon in England. There was another reason to make the journey. Bierce, as did Marc Twain and other writers in the 1870s, traveled to Britain trying to protect his writing from piracy.

During his time in London, Bierce continued to develop his powers as a satirist which, eventually, would come to full fruition in the Devil’s Dictionary. In 1873, Hotten agreed to publish Bierce’s The Fiend’s Delight and Nuggets and Dust. Written under the pseudonym of Dod Grile, these works contained sketches extracted from various earlier publications.

There is an apocryphal anecdote concerning the relationship between author and publisher. Having issued Bierce’s work, Hotten kept postponing his payment. He died a day before delivery of the check. Ambrose could therefore not cash his money. If he had arrived in the capital a grumpy young man, he soon turned into a cantankerous character. London’s literary life sharpened his caustic wit.

Before returning to the States in autumn 1875, Bierce and friends took symbolic revenge on their publisher by composing a “suitable” send-off. Using the occasion as a final chance to settle old scores, they composed a succinct epitaph:

Forgotten, however, Hotten was not. By the time of his death he had published 446 titles and left a thriving business. Andrew Chatto, his assistant for nearly two decades, took over the firm with the poet W. E. Windus as a sleeping partner. With the foundation of Chatto & Windus, Anglo-American literature remained the prime focus of the bookseller’s list.