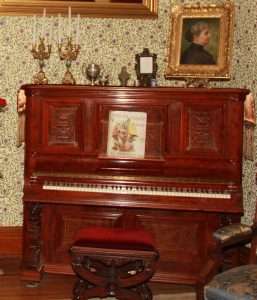 “The work is exquisite. The case is a marvel of excellent workmanship. Natural mahogany, polished highly, is used both front and back,” The Granville Sentinel reported on October 14th, 1889.

Ornamental panels were engraved in gold. The upright piano, a gift from son Russell Harrison, was kept in the upstairs sitting room, according to the Benjamin Harrison Presidential Library website.

Brothers John and Charles Fischer split off from business partner Robert Nunns in 1840 to establish J & C Fischer, according to Antique Piano Shop, an online museum.

In the late 19th century, the company was making about 5,000 pianos a year.

The following are more anecdotes of the lighter side of politics collected from historic northern New York newspapers:

On December 31st, 1886, The Morning Star of Glens Falls reported that between January 1st and February 22nd, President Grover Cleveland and his wife were scheduled to host five White House receptions as well as formal dinners with members of Congress, U.S.

Supreme Court justices, and diplomats. The First Lady was scheduled to host four addition receptions without the President.

“With these added to their regular duties, the White House family will have their hands full for the next two months.”

On January 25th, 1887, The Morning Star reported that Gov. David Hill and his private secretary, Col. Rice, were among spectators of “the exciting sport” at the Saratoga toboggan slide on January 22nd.

On October 23rd, 1922, The Post-Star reported that 90-year-old Jacob Anthony, who had consistently voted since turning 21, registered to vote in another election.

“He walked to the polling place at Jeffers’ garage on Locust Street, three blocks from his house, with a spryness that was remarkable for a man his age,” the newspaper reported.

He reminisced with election officials about historic elections he had witnessed.

“He recalled how he voted for Abraham Lincoln for president against the cry of the emancipator’s enemies that the election of Lincoln meant war.”

On August 27th, 1946, The Post-Star reported that President Harry Truman caught a three-pound Red Hind and two other fish deep-sea fishing during his vacation to Hamilton, Bermuda.

On October 10th, 1922, The Post-Star reported that Democratic gubernatorial candidate Al Smith announced that he would travel the state as a regular railroad passenger and by automobile because his campaign could not afford to charter a special railroad car.

“A special pullman would cost $20,000 a week,” he said. “We can’t afford that. Let the Republicans tour in their special cars. They have all the ‘goulash,’ but we have the right side of the argument.”

In the political wit category:

Everyone is endeavoring to make the best of it.” – The Granville Sentinel, August 11th, 1888.