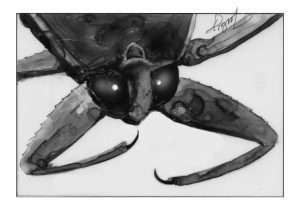 I was sitting poolside with my children on summer day when another parent hustled her son out of the water because of a swimming cockroach. The “cockroach” turned out to be a giant water bug (family Belostomatidae), among the largest of the hemipterans, or “true bugs.”

These insects are typically found in lakes and ponds, but sometimes show up in rivers – and occasionally in swimming pools.

“Toe biter” is another common name for these spectacular insects, and although they rarely bite people, when they do, it can be an intensely painful experience. The bite of a giant water bug can even lead to numbness of an entire limb. Symptoms vary but may persist for up to five hours, typically without lasting damage.

You may wonder why a large – up to 4 inches – and robust insect needs such potent weaponry. The explanation lies in how they feed. Giant water bugs hang upside-down in aquatic vegetation, their pointed abdomens close the water surface. They breathe through snorkel-like tubes and patiently wait for an errant fish – or amphibian, turtle, snake, or even a duckling – to pass. Then the bug goes from zero to sixty in a flash.

Giant water bugs are incredibly fast and skillful swimmers and pounce on prey, grabbing on with all six legs – including a pair of forelegs so powerful they’re sometimes confused for pinchers – and engaging in a brief struggle reminiscent of a rodeo ride. A single puncture wound delivered by a pointed proboscis is all that is required to subdue prey. It is less the physical wound and more the venom that delivers the coup de grâce – or the painful sensation in a wayward swimmer’s toe. Giant water bug venom includes cell-destroying toxins and enzymes to break the prey’s proteins down to a conveniently drinkable soup.

Giant water bugs also have a gentler side and are known to be among the best parents, and specifically fathers, of the insect world. Depending on the species, two approaches to fatherhood are common. Females of the larger species (sub family Lethocerinae) lay eggs on aquatic plant stalks just above the water line, where they are tended by the males. The fathers defend the eggs against predators, shade them with their bodies, and make excursions to bring water to moisten the eggs.

The smaller species (sub family Belostomatinae) practice what amounts to male pregnancy and even play rock-a-bye-baby with their developing offspring. These mother water bugs lay eggs directly onto the backs of their mates. The males alter their typical routines to ensure successful egg development. Instead of hanging in the weeds awaiting prey, brooding males make risky trips to the surface and push their backs above water to improve air supply for their precious cargo. While submerged, they use a combination of pushups and a rocking motion of the entire body to flush fresh water past the eggs, thus removing wastes or sediments.

So critical is the father’s role that some females will resort to nefarious means to ensure their eggs are cared for. When males are in short supply, marauding females will sometimes destroy eggs from other females being tended by males, and then mate with the newly available male.

Should you be concerned about protecting you and yours from these apparently ferocious pond and river dwellers? Probably not. Despite their “toe biter” moniker, of the seven giant water bug bite victims discussed in case studies from Brazil, five were professional biologists bitten while working. The at-risk demographic, it appears, is me. So, unless you are planning on joining my strange profession (and you would be most welcome), you may well be fine. And a quarter century in without a bite, I’m taking my chances.