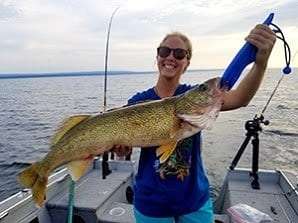 The New York State Department of Environmental Conservation (DEC) has released proposed regulations to increase the daily possession limit of walleye in Oneida Lake from three fish per day to five.

While this is good news for the current fishery, the burgeoning walleye population could potentially create negative impacts on the forage base in the lake, particularly on yellow perch. The proposed moderate increase in walleye harvest is necessary for the health of both the walleye and yellow perch fisheries. A recent survey indicates most anglers support the increase and more information on the angler opinion survey can be found on DEC’s website.

The regulatory proposal is available on the DEC website for review and public comment through Oct. 17, 2021, and should be submitted via e-mail to regulations.fish@dec.ny.gov with subject line “Oneida Lake Walleye Regulations” or via mail to the Inland Fisheries Section, NYSDEC, 625 Broadway, Albany, NY 12233-4753.

Photo of walleye provided by DEC.