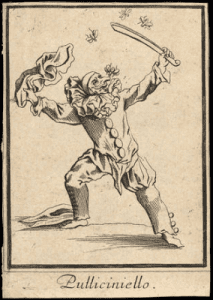 During carnival festivities in Madrid in February 2017, puppeteers Alfonso Lázaro de la Fuente and Raúl García Pérez gave a performance of La bruja y Don Cristóbal (The Witch and Don Cristóbal). The leading character is Spain’s counterpart to Mr Punch. With the show in full flow, police moved in. The puppeteers were charged with inciting violence as the witch carried a banner referring to a fictional terrorist organization.

In the United States, Punch & Judy shows reached a height of popularity during the latter decennia of the nineteenth century. This was a time of mass immigration and growing prosperity. The era was thirsting for entertainment. Aware of underlying social tensions, political authorities were keen to restrain the fun. 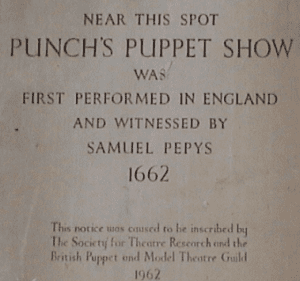 To this day, unease about Mr Punch’s rebelliousness is reflected in New York’s Administrative Code. The chapter on Public Safety (section 10-114) prohibits the exhibition “to the public upon the street, or the sidewalk thereof, any performance of puppet or other figures.”

The punishment for violation of the law? A fine of no more than twenty-five dollars, or imprisonment for thirty days, or both. Mr Punch is a suspicious figure. 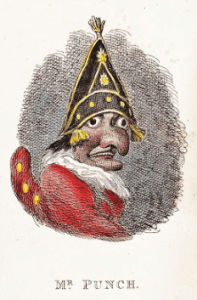 The first Punch & Judy show at Covent Garden was recorded by Samuel Pepys in his diary entry for May 9, 1662, having witnessed the itinerant puppeteer Pietro Gimonde at work. Otherwise known as “Signor Bologna,” he was one of many Continental entertainers who assembled in London to revive the performing arts following the Restoration in 1660. In October 1662 he was granted a command performance by Charles II at Whitehall.

The show’s main personality was Pulcinella, a stock character of Neapolitan puppetry. With his hunch back, hooked nose, and shrieking voice, he showed a thuggish disposition, especially when confronted with figures of authority. His favorite weapon was the slapstick (slap + stick, from the Italian batacchio), a device consisting of two sticks fastened together creating a loud slap when one character whacks another.

English audiences, still reeling from Oliver Cromwell’s repressive Puritan regime, were delighted with Pulcinella’s ribald antics and farcical humor. He was a rebel, resisting officialdom, and living by his own rules. His followers anglicized the puppet’s name to Punchinello and, subsequently, shortened it to Punch. His argumentative wife was originally named Joan. She was renamed Judy in 1818.

Puppet performances were monitored because they contained toxic elements of topicality. They spread political news and raised current issues. Responding to the moods and anxieties of the audience, these shows established a tradition of protest and dissent. Mr Punch became an icon of defiance. 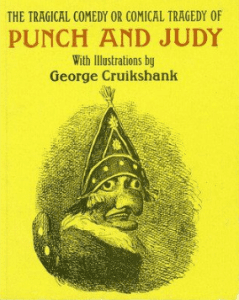 By 1820 the format of the Punch & Judy show had taken shape. Two characters were consistently present: Jack Ketch and Lucifer.

Ketch was London’s common hangman during the feverish 1670s and early 1680s. He has gone into history as England’s most bungling executioner after his botched beheading of the Duke of Monmouth on July 15th, 1685 (which took him five blows). Jack Ketch became a generic name for the role of executioner once he was presented as a foil to Mr Punch.

In a puppet feast of violence, the cheerfully amoral killer Punch slaughters his wife and baby, the agents of the law, and finally Lucifer himself. The show ends with the arrival of the executioner and Mr Punch being hung for his crimes. Later versions turned out to be more outrageous as Punch, to the delight of the audience, succeeds in enticing the hangman to put the noose around his own neck and then pulls the rope. It was a world turned upside down. 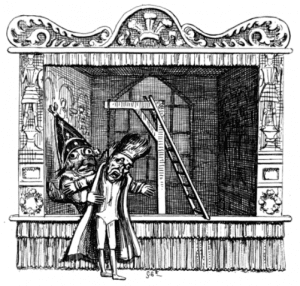 By the middle of the eighteenth century Punch had become a celebrity. Having discarded his original (Neapolitan) plain white costume, he started wearing the red and yellow outfit of an English jester, but the Italian input remained strong. Giovanni Piccini was born in 1744/5 in Piacenza, but there are no details about his early years. Having arrived in England in about 1779, he toured the major fairs before settling in London where his shows became a familiar sight. He has been referred to as the “first original street Punch.”

Piccini inspired a generation of future performers. In 1828, John Payne Collier published The Tragical Comedy or Comical Tragedy of Punch and Judy with illustrations by George Cruikshank. Popular in both Britain and America, the book was based on Piccini’s retirement performance.

Although puppet historians have doubted its accuracy, the narrative standardized Punch & Judy shows for decades to come. George Cruikshank’s visual record played a vital part in the process. There was nevertheless growing disquiet about Punch’s wife-beating escapades. Where Charles Dickens judged Punch & Judy as harmless fun, moral crusaders of his age objected to its violent scenes.

Gradually the show was cleansed of controversy by dropping inappropriate characters (the Devil, Punch’s mistress Pretty Polly, and others) and re-arranged for the moral education of children. The Neapolitan rogue of old turned into a Victorian killjoy. 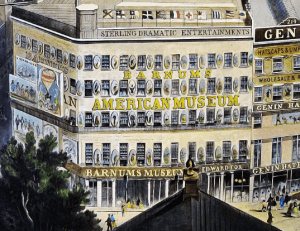 Punch and Joan made their way across the Atlantic. The first recorded British puppet show was advertised on December 30th, 1742. It took place in Philadelphia’s Coach and Horses tavern, across from the State House that would later host the signatories to the Declaration of Independence.

Five years later Richard Bricknell arrived from London in New York and presented himself as an entertainment entrepreneur. He was joined by Richard Mosely to stage a puppet show at the sign of the Spread Eagle as advertised in the New York Gazette & Weekly Post Boy of September 7th, 1747.

Although the first recorded Punch & Judy show did not appear until 1828 in New York’s Park Theatre, it quickly became a staple form of entertainment. Puppets found a home in “dime museums” amongst an array of other amusements. Barnum’s American Museum, located at the corner of Broadway, Park Row, and Ann Street, was the most prestigious and sensational of all such pleasure halls.

The dime museum provided a sanctuary to Punch & Judy as public safety laws in New York and elsewhere prohibited street puppetry. Being thus confined, the show lost some of its political edge and street fighting qualities – but not its adaptability. It remained a voice that spoke out for cornered minorities. Mr Punch reached out to immigrant communities.

Punch & Judy shows achieved their height of popularity in age of rapid economic growth and mass migration. The arrival of many (non-English speaking) newcomers led to narratives that criminalized immigrants.

A culture of intolerance gave rise to the Know-Nothing movement, formally known as the Native American Party (descendants of colonists or settlers), which propelled hate speech and stirred conspiracy theories of a Romanist plot against native-born Protestants.

Punch men played their part in helping immigrants settle in a harsh urban environment. Performing in their native languages, they offered the comfort of nostalgia and the bittersweet recollection of childhood joys. Sicilian, German, Greek, and Czech speaking puppeteers performed in various locations. 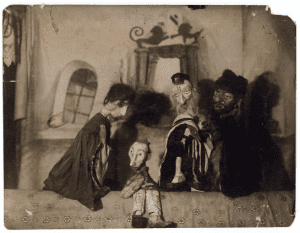 Some of the first permanent puppet theaters were opened by immigrants. Jewish settlers were particularly engaged with the stage. During the 1920s there were about twenty playhouses in operation in New York offering a variety of performances (from crass comedy to Shakespeare) all performed in Yiddish. Although puppetry was becoming increasingly popular in American theater, this form of entertainment had no distinct place in Jewish culture. 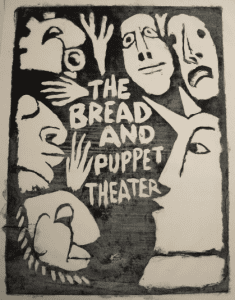 America’s only Yiddish puppet theater was founded by Yosl Cutler and Zuni Maud, immigrants from Ukraine and Lithuania respectively. Located on 12th Street, New York, the narrow four story Modicot theater opened on December 17, 1925. In their performances, the puppeteers fused Jewish folklore with biting satire against a post-war background of xenophobia that gave rise to the immigration acts of 1921 and 1924 (disproportionately targeting Eastern European Jews).

Peter Schumann’s radical Bread and Puppet Theatre was a continuation of the trend set by this tradition of puppeteering. Having arrived in New York from Silesia in 1961, he founded his company two years later. From its first days of performing the group was involved in theatrical activism that ranged from demonstrations against the Vietnam War to the Nuclear Freeze campaign of the 1980s. In that sense, the Pulcinella tradition of dissent was truly upheld.

Illustrations, from above: Pulliciniello (Pulcinella), after Jacques Callot, about 1622 by Cornelis Danckers (V & A); George Cruikshank’s Punch, 1828; John Payne Collier’s The Tragical Comedy or Comical Tragedy of Punch and Judy, 1828; George Cruikshank, Punch teaches Jack Ketch how to hang a man, 1828; Barnum’s American Museum in 1848 after John William Hill by Henry Papprill (Graphic Arts Collection); Flag of the Know-Nothing movement, circa 1850; puppets at the Yiddish Modicot theatre at 12th Street, New York; and an early poster for Peter Schumann’s Bread and Puppet Theatre. (University of Vermont Libraries).