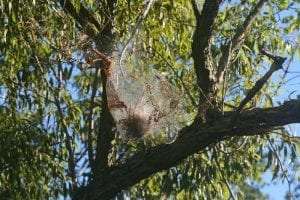 As August progresses, numerous subtle signs in nature arise, indicating that the change in seasons is approaching. Yet, of all of the sights, sounds, and smells that characterize the latter part of summer, few elicits as unappealing a response as the appearance of the communal shelters used by the fall webworm (Hyphantria cunea).

Typically during the first weeks of August the silken tents of the fall webworms become conspicuous enough for people driving along a highway, walking through an open hardwood forest, or biking on a backcountry road to notice. These unsightly masses of thin white fibers are woven by over a hundred tiger moth larvae that live inside them and are always placed on the very end of a twig of a preferred tree, like a cherry or willow.

Eventually these translucent shelters may engulf all of the foliage that occurs over the last few feet of one, or several adjacent twigs. The visible presence of various pieces of debris within this enclosure, along with the ragged shape of this structure, creates a less than attractive mass of material enveloping the twig. Some people liken it to the tattered remains of a plastic grocery bag that has become entangled over the end of a twig and has destroyed all of the foliage around which it has wrapped.

A close view of this seasonal shelter reveals numerous fuzzy, black-headed caterpillars that are less than an inch in length. These are the maturing larvae that have been at that site for the past several weeks feeding on the leaves in that immediate location.

Additionally, there are clusters of rounded, pin-head size masses that are the waste products of the occupants of this structure. The dried pieces of leaves that were never eaten, flakes of bark that have fallen from the twig, and other scattered clusters of debris also litter the inside of this translucent home.

During the very early summer, the adult moth lays her egg mass, which contains several hundred eggs, in a spot where the future colony is most likely to flourish. Places that are exposed to direct sunlight are typically selected, as the foliage of trees on these sites tends to produce a higher concentration of nutrients compared to those that are in the shade for much of the day.

After the eggs hatch, the tiny caterpillars begin to create a silken shelter around a section of leaves on which they will feed for then next four to six weeks. Initially, the tent produced by the fall webworm is rather inconspicuous because of this insect’s small size. As the larvae grow and consume the few leaves within their enclosure, an expansion program begins, and more foliage further along the twig is included in the tent. Eventually, sticks that may overlap that spot, or those that come within a few inches of it, may also be incorporated into the developing complex that is wrapped by the webworm’s thin sheet of fabric.

Later during August, the larvae reach a stage in their development at which they abandon this shelter and look for a place on the ground, in a deep tree cavity, or under a section of loose bark in which to spend the winter. After settling into some protective nook, the larvae experiences a transition into its pupa stage. It is in this dormant form that the webworm passes the next eight months before emerging as an adult late next spring.

It is important to note that the fall webworm is not the same as the tent caterpillar. The tent caterpillar is well over an inch in length, active in the late spring and early summer and makes its tent-like home in a crotch, or fork among the interior branches within a tree. The fall webworm is substantially smaller, active later in the season, and constructs its home on the outermost limbs and twigs of trees and shrubs.

Infestations of fall webworms in any particular place come and go, as with population swings for any species of insect. However, during those years when fall webworms are few in numbers in a general location their absence often goes unnoticed, as it is an occurrence that people do not like. It is not viewed the same way as a chorus of crickets, or the bright amber flowers of goldenrod coloring an open area. But fall webworms still are a similar sign that autumn is just around the corner.