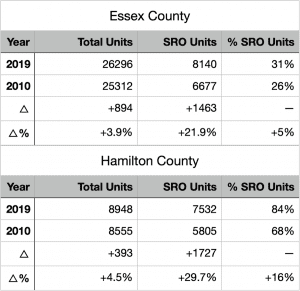 How can any community with so many vacant dwellings suffer from a housing crisis?

The Adirondacks have been gentrified by ghosts, at least on paper. Urban gentrification appears on the books as a stark change in income. If the median household income of an urban census block rose from $15,000 to $50,000 between 2010 and 2020, then we can presume some tectonic economic shift occurred beyond the telltale creep of predictable factors like inflation.

What happened? Did the residents all strike it rich? More likely, the occupants canvassed the first time round were replaced by wealthier ones. The same sort of “X” doesn’t always mark the spot in Adirondack gentrification, for two reasons. In the first place, an influx of retirees doesn’t necessarily mean a surge of residents with measurably higher incomes. In the second, most Adirondack gentrifiers don’t reside here.

When the enumerator comes knocking, they are somewhere else, their incomes instead shaping the statistical topography of the communities where they live, work and vote. Indeed, this population tends to leave only one conspicuous footprint upon the Adirondack record: the housing count, and particularly the US Census category of seasonal, recreational or occasional use.

This number lays bare some striking facts about the Adirondack housing situation, especially in the central Adirondack counties of Essex and Hamilton, the only two whose figures are undiluted by any other infrastructure because they are located entirely within the Blue Line. Of the roughly 26,000 housing units in Essex County, around 8,000, or a little under a third, are seasonal homes. In Hamilton County, that figure climbs to a whopping 84%, or about 7500 units out of nearly 9000. By comparison, about 4% of housing is seasonal in all of New York State, as in the United States at large.

These numbers are so stark that it is tempting to attribute them to sampling error. But ethnographic data – the kind of information you glean from living local over a long period of time – support rather than refute them. The names and places below are aliases but the stories are real enough, a few among the legion accounts of displacement (and near-misses) that put the narrative flesh on the statistical bones of Adirondack exile.

In the winter of 1999, Molly Riley, a 35 year-old divorced mother of two small children from the hamlet of Laketown, spent a miserable night in a boat launch parking lot, reluctant to impose further on friends after a week of sofa surfing. Molly had packed her car and fled her boyfriend’s trailer after a fight that left her with a black eye.

She’d lost her own creaking double wide some months earlier when the pipes froze and her landlord, who planned to sell the house come spring, elected eviction over repair. Molly earned a modest living from an array of part-time jobs – cleaner, bartender, home health aide – typical of the Adirondack interior, where tourism and government are the chief proprietors of the economy. It was enough to make the rent, until she lost her housing altogether, and found there was no space for her amidst her hometown’s abundant stock of vacant chalets, lodges and cottages that saw human company a few weeks out of the year at best.

Twenty years after Molly’s troubles in Laketown, 49 year-old Kate Sawyer lost her home to divorce some sixty miles away in the more prosaic community of Riverton. Kate was better off than Molly. She was thrown onto the housing market after her children were grown but while she was still reasonably young and healthy. She held a full-time position in local government that would see her through to retirement.

Her family owned an off-grid camp nearby where she could make do for three seasons at great need. And Kate got away with her skin, rather than fleeing a beating in the middle of the night. Yet after several fruitless months, she was close to despair. Despite having full-time, stable work and a modest divorce settlement in the bank, Kate couldn’t find a place to buy, a place to rent, or even a place to build – not in her town, not in adjacent towns, in any direction – that would not strap her with a larger mortgage than a bank would grant, and one she was reticent to take at her age in any event. At length, she convinced a family friend to let her pour some sweat equity into a vacant space above a storefront on Main Street, where she waits anxiously for something more permanent to come on the market.

Just as Kate’s divorce came though, a 26 year-old Bobbie Barlow was engaged in much the same hunt in her own hometown of Mountainville, a bedroom community for a small, down-on-its-luck rust belt city just over the Blue Line that marks the Adirondack Park on local maps. Unlike her siblings and cousins, who got out of Dodge as soon as they attained their majority, Bobbie wished to stay in the Adirondacks after leaving high school. She found steady if part-time delivery work in the city down the mountain.

After the death of her grandmother, Bobbie moved into her empty house as a caretaker while the family undertook cleaning and repairs in preparation for sale. With five bedrooms, two bathrooms, a large garage, two barns and a $3000 annual tax bill, the house is overkill for Bobbie and her dog. Her precarious job makes her ineligible for an Adirondack-sized mortgage, and no year-round rentals have come available in Mountaintville in the last few years.

Her parents have contemplated building her a small cabin on their own property next door, but building to New York State’s stringent health and environmental specs will cost most of their equity in the house Bobbie inhabits, and they have other children as well as retirement to consider. Bobbie waits, and like Kate, keeps a close eye on the market, but she fears she will have to leave the Adirondacks altogether, as Molly did twenty years before her.

Eviction is an old affliction in the Adirondacks. Its most acute outbreaks have been inflicted by the region’s most formidable landlord. The 1910s, when the State undertook a mass removal of Adirondack squatters from Lake George to Little Canada, were red-letter years for this sort of dispossession. But its prospect has cast a shadow over the embattled landscape since the late nineteenth century, when New York began to stockpile vast swaths of tenant-less Adirondack acreage for a park, and found the local population it had previously encouraged to settle there an impediment to that revised imperative.

The strain of Adirondack eviction experienced by Molly, Kate and Bobbie is stealthier, shadier, and far more systemic. In this version, a local gets to keep her foothold in the Adirondacks as long as she doesn’t shift. If she should lose her footing for any reason – her husband beats her up or the landlord raises the rent beyond her means or a catastrophic failure demands a repair she can’t afford or she simply grows up and ages out of her childhood digs – there isn’t anyplace to land softly, because few landlords will trade the $700 in rent a week they glean from tourists for the $700 a month she can afford on local wages.

Such haphazard crises are not unique to the Adirondacks, but over time, they add up to a pattern of regional eviction that is slowly eroding the local population in the chronic absence of any domestic amelioration. If this displacement first began to take hold in Adirondack resorts like Laketown, it is now ubiquitous in the Park’s Rivertons and Mountainvilles as well.

Molly, Kate and Bobbie all had one ace in the hole when the rug went out from under them: social capital. Indeed what working class remains in the Adirondacks endures largely by the grace of kith and kin to whom they can cling for some purchase on the slippery mountain landscape.

Molly left her kids with her mother while she sorted out her housing situation. Kate appealed to the goodwill of a friend to mitigate displacement-by-divorce. Bobbie found a haven in her grandmother’s home. In each case, connections coughed up affordable shelter when the Adirondack housing market fell short during a period of crisis.

It is hardly unusual for family in particular to provide such a safety net when the market fails, and the state is absent or ineffectual. But it is precisely the continuity of kinship that Adirondack gentrification threatens to disrupt.

We consider how kinship came to be in the cross-hairs of gentrification in Part 3 of this series.

This is part two of The Devil’s Due: Adirondack Gentrification and Environmental Justice, a seven-part series considering the role of rural gentrification in the Adirondack Park. Read the entire series here.

Illustration: census tables from the American Community Survey 2010 & 2019, compiled by the author; and evicting squatters from Little Canada, Indian Lake, from the Albany Times Union, March 16, 1914.