While this august assembly of middle-aged men sat pondering the problem with pie charts and furrowed brows, back home in the mountains, the keystone species of the demographic ecosystem – Adirondack mothers – got on with the business of raising children in a climate that is notably inimical to their interests even within the auspices of nation that is generally hostile to the working conditions of those who shoulder the bulk of the responsibility for social reproduction.

Social reproduction is the lifeblood any economic system. It is the process that moves a new generation of workers from the womb to the workplace in a fit state to keep the economy ticking over. In order for this to happen, workers must be conceived, gestated and delivered. But they must also make it to adulthood both willing and able to work.

Their skills must fit the economy of the day, whether that calls them to the forest to hunt or the field to sow or the factory to drill or the five-and-dime to sell, and they must consent to perform this labor without rebelling or revolting or threatening to overturn the status quo. Social reproduction is the birth, socialization, education, raining, acculturation and acquiescence of workers, and it does not happen spontaneously. Like its counterpart in  production, it requires laborers, most of whom are women and many of whom contribute this labor to the economy for free.

This workforce is becoming increasingly scarce in the Adirondacks. As recent demographic trends have shown, even compared to the generally shrinking landscape of upstate New York, the anchoring Adirondack counties suffer from low birth rates, low fertility rates, and an exodus of women in both their childbearing prime and grand-parenting years. Social reproduction is increasingly absent from the Adirondacks, in part because its agents are leaving as gentrification depletes the vital spaces required to carry it out. 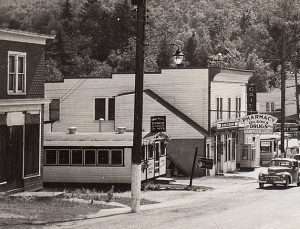 The Forest Preserve was created when it became evident that downstate capitalism would dry up without the Adirondack watershed to feed the commercial corridors of the Erie Canal and the Hudson River. Today, the region faces a different threat of desertification, one that imperils its human infrastructure rather than its riparian one.

Affordable housing anchors the social reproductive landscape as surely as the trees anchor the rivers, for that is where the children of the working class are born and raised. But it is not the only feature of the reproductive landscape under threat, and like the forest and the water, these features are linked.

The obstacles to social reproduction in the North Country begin before a child takes her first breath. The presence of only one hospital within the expanse of a Vermont-sized Park means that aspiring Adirondack mothers have wildly uneven access to maternal, neonatal, pediatric and emergency care. A woman in the south of Mayfield can make it across the Blue Line to a maternity unit in the north of Gloversville in under ten minutes, while ninety long miles lay between a woman in Raquette Lake and an obstetric theater in Utica to the west or Glens Falls to the east.

Hamilton County is indeed designated a maternity care desert, where health care services for expectant mothers are limited, nonexistent or inaccessible. The sheer distance from lifesaving assistance makes the prospect of pregnancy and especially childbirth – the most dangerous labor in the world – a daunting prospect for those who face these exigencies from the far-flung corners of the backwoods.

An Adirondack mother who survives the vagaries of labor, delivery and postpartum aftercare finds her problems have only just begun. In an age of stagnant wages and ballooning costs, two incomes are increasingly the ante for raising a child, especially in New York State, whose cost of living is one of the highest in the nation. Yet the Adirondack region is a notable childcare desert with a single daycare placement for every six children, leaving many Adirondack families with the more costly recourse of individual care, an expense that can easily cancel out one of the household incomes that necessitated it in the first place. Women who go it alone find that the regional gendered wage gap has in recent years remained roughly on par with the national one even as New York State’s has improved.

Beyond complex services like childcare, large swaths of the Adirondack landscape are deficient in even the most basic necessities of social reproduction, like food, with most residents living tens of miles from a year-round grocery store and the threat of further depletion on the horizon.

Of those social reproductive infrastructures that do exist, public transportation will deliver women to almost none of them. While a very few Adirondack municipalities offer some limited form of public transport, mass transit of any sort is almost wholly absent in the vast majority of the North Country. Rather, that cost is effectively privatized to families who must buy, insure, maintain and fuel a passenger vehicle, as well as dig it out from under a foot snow regularly for a good part of the year.

The dearth of basic services like waste collection, recyclable sorting and mail delivery in many towns leaves individual households to pick up the tab for what are generally collectivized costs in the city. There are few alternatives. Very little of the labor associated with children, particularly in the early years, can be done by Zoom. Child rearing is a hands-on occupation, or it doesn’t get done.

The decline of affordable housing has a probable knock-on effect upon concomitant services, infrastructures and relationships. As each succeeding cohort of Adirondack children shrinks, economies of scale begin to fail. The built environment of social reproduction, from schools to daycares to playgrounds to pediatric centers to youth facilities, becomes increasingly unjustifiable in a rationalized system where expenditure is measured per capita.

The disruption of the kinship circle by displacement prevents family from filling the void of state and market in the work of child and elder care. Every mother who leaves the Park is a nail in the coffin of the local school, but given the persistent percentage of the childcare burden offset by grandparents even in advanced capitalist societies where such labor has also been commoditized, the loss of a grandmother can have a similar effect. The compulsion to stick close to kin may even compel one to follow another across the Blue Line in the interest of maintaining reciprocal labor exchange: grandparents caring for grandchildren as they are born and raised, children caring for parents as they age and die.

Of course, other factors undoubtedly contribute to the diaspora of caregivers. Hamilton County, for example, has no institution of higher education within its borders, not even a community college. But those who leave temporarily to gain skills, experience, degrees, qualifications, partners, savings, physical remediation or otherwise improve their lives cannot return easily to a space tacking ever toward the accommodation of a transient population rather than those wishing to put down roots.

And yet, such populations have a longstanding tenure in the Adirondacks. Indeed the phenomenon of seasonal residents is likely ancient.

We’ll Answer Your Call of the Wild 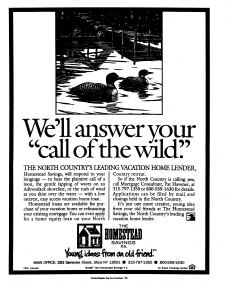 Wilderness is the lie imperialists tell about the land they wish to conquer. This is why, more than 10,000 years after Paleoindians first inhabited the region in the wake of a receding inland sea, we can still call the Adirondacks “wild” with a straight face.

Wilderness is less a place than an exculpatory device, an apologia for colonization to come. The same justification surfaces when the colonizers become the colonized, naturalized in their turn by those who seek to write their own brand of civilization across a space that must be reconstructed as wild if their civilizing mission is not to be read as deracination.

It is no accident, then, that urban gentrifiers have historically billed the neighborhoods they wished to redevelop as “urban jungles,” the “Wild West” reinvented as a “new urban frontier” then packaged and resold to hipster “pioneers” as vacant territory for the taking.

This vaguely racialized language, borrowed from the annals of European colonialism, was recycled back into the countryside with almost unbearable post-irony when gentrification hit the mountains. “We’ll Answer Your Call of the Wild,” ran one slogan in the glossy pages of Adirondack Life in the 1990s, part of a widespread marketing campaign to create demand not just for a commodity, but an Adirondack brand that lent authentic rustic cachet to everything from Swedish vodka to Indonesian coats.

Demand for rusticity is not particularly new. Indeed, scholars such as Raymond Williams have traced a general longing for rurality in western culture, one that crests during times of socioeconomic upheaval, back to at least the ancient Greeks. On this side of the water, Roderick Nash dates the American cult of wilderness to the 1920s, and our own Philip Terrie has charted its manifestation as an Adirondack aesthetic in considerable detail. Yet Adirondack gentrification is far younger than any of these movements, belying demand alone as its motor force.

It would take well over a century for wilderness desire to manifest as a peculiar form of wilderness housing, and still longer for that form of housing to imperil the production of other kinds. Seasonal homes have not always been so ubiquitous in the Adirondacks. They are a product of twentieth century developments like the automobile, the macadam road and the weekend, which opened even the deepest heart of the mountains to a far broader constituency than had ever been able to reach them before. Their proliferation has especially accelerated since the turn of the millennium and the invention of AirBnB, Vrbo and their regional predecessor Adirondack By Owner.

And yet, if this infrastructural shift was the only change that had come over the Adirondacks, it is not entirely clear that gentrification would necessarily have followed. As in the city, something else had to happen for the residential housing market to acquire the power to change the class character of a regional population.

We examine the historical process through which Adirondack desire came to be expressed through a particular form of housing in Part 4.

This is part three of The Devil’s Due: Adirondack Gentrification and Environmental Justice, a seven-part series considering the role of rural gentrification in the Adirondack Park. Read the entire series here.