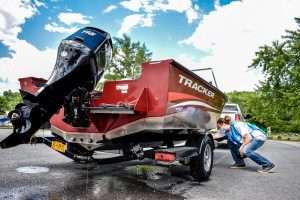 The report, which can be found on the Adirondack Watershed Institute website, states that six species of aquatic invasive species were found on boats in the Adirondacks in 2020, none of which were new to the region.

In 2020 AWI boat launch stewards reported a 25% increase in boats and boaters compared to the previous three years. However, fewer invasive species were found on boats than in past years and decontamination numbers were up in 2020.

The report states that AIS were more frequently found on boats leaving water bodies than on launching boats. The majority of AIS finds were at Lake Champlain launches followed by Chateaugay Lake and Second Pond on the Saranac Lake chain.

The busiest decontamination station in the AWI network is the Adirondacks Welcome Center which washed 538 boats in 2020.

The report states that not all boats pose a risk. AWI stewards found that more than half of the boaters they interacted with in 2020 launch their boat into the same waterbody or have their boats out of the water for more than 2 weeks, significantly lowering the risk of AIS transport. However, stewards treat each boater interaction with precaution.

The report states that AWI employs more than 100 seasonal technicians to operate 51 boat-inspection and 29 decontamination stations across northern New York.

The report is based on real-time data collected at the launches to record invasive species catches, to log the number of boaters at the launches, and to learn where boats come from before they visit Adirondack lakes. The data are part of a statewide database that helps New York State track invasive species and allocate resources to the highest priority areas across the state. Detailed reports for each individual location can also be found on AWI’s website.