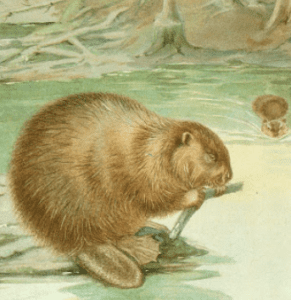 Castor canadensis is North America’s largest rodent and the second largest in the world — which was driven to near extinction in the Adirondacks around the turn of the last century, but whose reintroduction was astoundingly successful.

Although they had once been a major Adirondack economic force by anyone’s estimation — it was reported in 1671 that Dutch traders delivered 80,000 pelts a year to Europe — there was a dearth of information on the beaver once they had ceased to be profitable.

At the turn of the last century only two books dealt with the beaver in the Adirondacks, James Ellsworth DeKay’s Zoology of New-York; or, the New York Fauna, comprising detailed descriptions etc. (published in 1842, a result of his involvement in the 1835 Geological Survey of New York), and Clinton Hart Merriam’s Mammals of the Adirondacks.

Lack of information regarding beaver populations led Harry Radford, writing in the 1906 Annual Report of the NY Forest, Fish & Game Commission (forerunner of the DEC), to report that “until three for four years ago . . . hardly one in ten of the guides, hunters, trappers and lumbermen, who spend a large part of their lives in the woods of the Adirondacks, knew that there were any wild beavers remaining.”

In fact, in the 1890s, the state zoologist declared they were extinct, as did the Essex County Republican. It wasn’t surprising, because the few remaining beavers by that time were located in the remote area northwest of Upper Saranac Lake in Township 20, Franklin County.

The great loss of the species was attributed to trappers, both Native American and European, who supplied European markets for almost 200 years (1620s to 1820s). As a measure of the pace of trapping, consider that in a single year during the late 1600s the Hudson Bay Company, who shipped many of the beaver trapped in the Adirondacks, exported an incredible 175,000 skins. Many of the pelts supplied the beaver hat fad that raged throughout Europe into the 1800s.

In addition to hats, which were made by clipping the soft fur from the hide and pressing it into a felt, beaver was also used for other commercial purposes. The skins themselves were used for glue, the oil for a number of purposes, and the castoreum (a secretion used with urine to mark territory) was used in perfume and medicinally (not to be confused with castor oil, which comes from a bean). Until the 1700s, castoreum was used to treat headache, fever and hysteria; the Romans thought the fumes of burning castoreum could induce an abortion and beekeepers in the Middle Ages believed it increased honey production.

When steel traps began being used around 1800 in combination with an attracting scent, the beaver’s fate was sealed. It’s estimated that there had been millions of beaver in 1600 in Northern New York, but by 1860 there were perhaps only 50 beaver in the state, existing in about seven or eight families along the St. Regis and Raquette Rivers. These are believed to have reached an ebb of just one or two families located near the Saranac Inn by 1900. It was these beaver that are said to have sparked a renewed interest in the species locally and led to agitation for their reintroduction beginning about that time.

Initially, a few large landowners tried to reintroduce beaver themselves. Edward Litchfield at Litchfield Park (between the villages of Long Lake and Tupper Lake) tried in 1901, and Timothy Woodruff brought some to his private preserve at Lake Kora in 1902. In all, about 20 beaver from Ontario were reintroduced between 1901 and 1906; of these, seven were purchased from the Canadians at the Louisiana Purchase Exposition in 1904 by the state and brought to Old Forge for release in the South Fork of the Moose River. The state later brought fourteen more light-colored “yellow beaver” (same species, their color varies) taken from Yellowstone National Park; these were scattered around the Adirondack region.

The reintroduction worked amazingly well, and by 1915 it was estimated that there were 15,000 beaver in the state. Six thousand were taken in the first two special trapping seasons (in 1924 and 1925); regular trapping seasons began in 1928.

In 1975 the beaver was made the official mammal of the New York State.