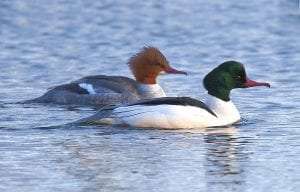 The waterways of New York State that are a favorite for outdoor enthusiasts during the summer are also highly attractive to many forms of wildlife. While many creatures are often difficult to spot, others are regularly noticed by kayakers, canoeists, power boaters, and individuals simply sitting on a porch overlooking a busy lake, a quiet pond, or a back country river. Among those forms of animal life routinely seen, especially after the July Fourth weekend, are the mergansers, which thrive in most of the larger aquatic settings in New York.

The American, or common merganser, known to many as the fish duck, is recognized by its narrow, hook-tipped bill and a protruding row of feathers on the back of its head which often gives the impression that this bird is in need of a comb. This crest is far more pronounced in the female than in the male, however, both sexes have this irregularity to the profile of the back of their head.

The common merganser is one of the most abundant species of waterfowl in the Adirondacks, as this bird thrives in cold, northern regions where mature forests surround favorable bodies of water. Like the goldeneye and wood duck, the merganser strongly prefers to place its nest inside a hollow tree. A large, deep cavity created by a pileated woodpecker, or a naturally occurring chamber in a sizable, partially rotted trunk are generally the spots selected by the hen to house her nest. A wood duck box may also be used by a merganser if the hole is large enough for it to enter.

When the hen begins to incubate her completed clutch of eggs in mid spring, the drake abandons her. Shortly afterward, he seeks out a secluded area and experiences a molting period that results in the loss of his bright breeding plumage. Eventually, the drake develops a color pattern of sooty-gray on its back and rusty-tan on its head, similar to the hen, for the remainder of the summer and into the first weeks of autumn until he molts again.

Throughout June when the hen is incubating her eggs and the drake has withdrawn to more out-of-the-way places, sightings of mergansers become rare. However, as the eggs hatch and the chicks exit the cavity and enter the water, new families become a common sight on waterways throughout the North Country.

Young merganser chicks are able to feed themselves from the time they leave the nest, which may be the same day as they hatch. While these birds closely follow their mom on the water, they do not look to her for food. Aquatic bugs, tadpoles, and small leeches make up the bulk of their diet for the first week or two after hatching. The hen leads them to places where the water is more shallow and warmer, which typically harbors the greatest concentration of such animal matter. Mergansers routinely dive under the surface to forage for prey and are totally dependent on their eyesight to locate items to eat. The clear, highly transparent waters of most Adirondacks lakes and rivers, and the rich sources of invertebrate matter contained in these waterways allow this aquatic predator to acquire enough to eat to develop properly.

Eventually, the young mergansers concentrate more on finding small fish as do the adult birds. Unlike loons, mergansers prefer to fish in more shallow waters. Because the merganser is only able to hold it breath for 20 to 30 seconds, it tends to search for prey at depths of 5 to 10 feet.

While merganser chicks instinctively follow their mom immediately after hatching, they may eventually associate with any family of mergansers they encounter while cruising along a lake shore or river. This is why some merganser hens may be seen with 15 or more chicks following them while others may only have a half dozen young birds tagging behind. Sometimes the number of chicks accompanying a hen is related to the number of their eggs that hatched, while other times it may be related to the interactions with passing families. (I have seen 2 families of ten chicks each pass by one another and end up with one hen being followed by a dozen chicks while the other only had 8.)

Being on the water during July and August is a great experience, and it becomes even more fun if various forms of wildlife are seen. While one never knows what type of creature may appear on, or above the water, it is safe to say that sightings of the common merganser rank near the top of the list of animals encountered in New York State.