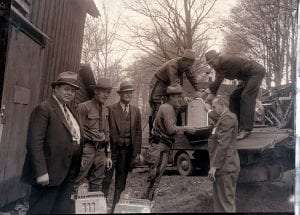 In April of 1931, eight slot machines were seized by Troopers in raids on a number of hotels in the Catskills town of Fallsburg, including the Elm Shade, the Ambassador, and the Flagler. The machines were destroyed “in the public square” before more than 150 onlookers and the $130 found inside them was turned over to the Town’s poor fund.

It wasn’t the first slot machine raid in Sullivan County, and it certainly wasn’t the last. In fact, for the better part of a decade, such raids seemed like a regular occurrence.

Seventeen machines were seized in a raid on a South Fallsburg boarding house operated by Saul Goldberg in May of 1932, and one local newspaper described the effort as “the opening engagement in the annual summer battle between law enforcement officials and the slot machine racket in Sullivan County.”

Similarly, a cache of machines stored in a Kauneonga Lake barn for safekeeping were confiscated in a raid in May of 1939.

Police under the direction of D.A. William Deckelman discovered 21 slot machines, 20 of which had never been used before, valued at about $1,200. It was one of the largest slot machine hauls in county history. Deckelman was joined in the raid by Sheriff Harry Borden, Deputy Sheriff Jay Lass, State Police Sgt. Thomas J. Mangan, and Troopers Cecil Metcalfe, William Leins, and William Driscoll.

“One of the largest slot machine hauls in recent years was recorded on police blotters at Kauneonga Lake Tuesday afternoon shortly after the May grand jury reported to Justice Pierce H. Russell at Monticello,” the Liberty Register reported in its May 11, 1939 edition. “Joseph Sawitch was arrested as owner of the premises, a farm about two miles from Kauneonga Lake on the old Swan Lake road, and presumably owner of the machines. He had been in Liberty when the raid started, but had returned as the police were unloading the machines from the second floor loft of the barn in which they were stored.

“The machines contained no coins, and were presumably being made ready for summer distribution to county hotels.”

Instead, the machines were destroyed after being presented as evidence in local court. Sawitch pleaded guilty when arraigned later that day before Magistrate Chauncey Countryman, and he was fined $10, the going rate for slot machine possession back then. But county residents who knew about organized crime’s stranglehold on the gaming operation here knew better. Joseph Sawitch didn’t own the machines, it was just safer for him if he didn’t say who did.

More than fifty years later his wife confided that some men had rented the barn for storage, and Sawitch could tell from the looks of the men that it was best he not ask what they intended to store. It was a fairly common story back then. In fact, slightly less than a year later, a similar raid resulted in the confiscation of 18 slot machines from a garage on Liberty Street in Monticello. Again, the owner of the property pleaded guilty and was fined. He told police he had been renting the barn to a group of men who had been using it for storage.

These raids continued, with varying degrees of success, throughout the summers of 1940 and 1941. Slot machines and other gambling devices were discovered at hotels and bungalow colonies– even some small businesses– in Wurtsboro, Masten Lake, Glen Wild, Mountaindale, Thompsonville, South Fallsburg, Swan Lake, Smallwood, and Ulster Heights. Resort operators and concessionaires, and in some cases candy store owners and druggists, were fined; slot machines, dice games, and mechanical card games were destroyed.

These raids certainly put a crimp in the mob’s gambling operation in the Catskills, but the Brooklyn District Attorney’s office – perhaps not coincidentally – had already begun to unravel Murder, Inc., and that, more than anything else, is what finally put the well-organized mob-connected gambling operations here out of business.

Read more about the history of gambling in New York here.