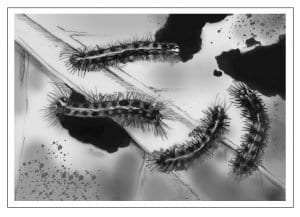 Occasionally I get an email from a camp, school, or even my local Rotary asking if I can present a program on insects. So it was not unusual last week for me to be handing insect nets to excited Cub Scouts. I led them toward some ash trees and made sure each Scout had an insect to examine under the microscope. Our field trip ended beneath a maple, where a parent had pointed out a profusion of caterpillars.

These were Lymantria dispar, formerly known as Gypsy Moths, which are abundant in the Northeast this year. We used forceps to extract these larvae from bark crevices and take a closer look. These large, hairy caterpillars – some measuring 3 inches long – appear black because of the copious black to reddish hairs covering their bodies. There’s pale mottled skin between the hairs, a light stripe down the middle of the back, and five pairs of blue warts along the back, followed by six red pairs.

These caterpillars and the moths they become should be handled with forceps or gloves, as their defenses range from annoying to severe, depending on your exposure and immune response. Hairs from caterpillars and moths and scales from moths can cause sometimes painful rashes or welts. Problems requiring medical attention, including shortness of breath or difficulty swallowing, are rare – and more likely when a child pops a caterpillar into his or her mouth. If you avoid contact with bare skin, it’s unlikely these very hungry caterpillars will cause any discomfort.

The damage tent caterpillars may cause to your favorite trees and shrubs, however, is a different story. It’s a Eurasian species introduced to North America in 1868 in Medford, Massachusetts, in an ill-fated attempt to breed hybrid silkworms and establish a silk industry in the United States. While that experiment failed, the caterpillars have thrived.

These caterpillars are not picky and eat the leaves of over 500 plant species. Smaller caterpillars eat around the clock, while larger, older individuals eat mostly at night, climbing down from tree canopies to hide in bark crevices and other shaded locations – including unoccupied bird boxes – during the day. This vertical migration provides opportunities to protect vulnerable trees. One technique is wrapping duct tape, sticky-side out, around tree trunks to catch marauding caterpillars coming and going. Another approach is to tie burlap – or perhaps a leg from an old pair of jeans – around your favorite sapling using a length of string. The spaces between the tree trunk and the fabric above and below the string provide hiding places from which caterpillars can be removed.

This year’s uptick is part of a larger phenomenon. Outbreaks occur about every 10 years and tend to be synchronized across broad areas. Dry springtime weather is frequently a driving force. A Japanese fungus called Entomophaga maimaiga, introduced during the 1900s to counter the damage, usually kills large numbers of tent caterpillars. Caterpillars killed by the fungus appear stiff, dry, and hang head-down on trees, releasing spores that seed the next fungal generation. However, the spores require moisture to germinate; dry springs reduce fungal growth and therefore increase caterpillar numbers.

If you’ve noticed an unusually large number of these caterpillars on your favorite oak or apple tree this season, you are not alone. In hard-hit areas of the Northeast, these pests have stripped leaves from trees, causing them to look more like their winter selves than lush summer shade trees. Liam Coran, a Saint Michael’s College student, reported that it sounds like rain at his wooded research site in Colchester, VT but without a cloud in the sky. The sound is made by caterpillar frass, or poop, pinging the leaves below.

On the positive side, the end is likely in sight. They are early season tree munchers, and peak caterpillar abundance has passed. Most trees survive an occasional defoliation and produce a second flush of late season leaves to partially compensate. Exceptions include recent transplants and trees weakened by other factors. Conifers, including hemlock, pines, and spruces, are not preferred hosts, but can be affected in outbreak years; unfortunately, complete defoliation of conifers usually kills the tree. But most deciduous trees will survive and record the event as a slimmer-than-normal annual growth ring.